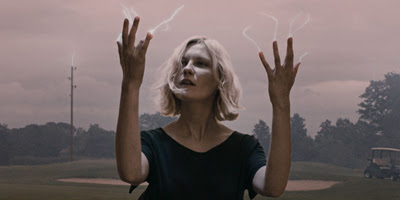 Melancholia (Lars von Trier/Denmark, Sweden, France, Germany/136mins)
“Enjoy it while it lasts,” says Charlotte Rampling as a wedding-hating mother of the bride in Lars von Trier’s apocalyptic ceremonial-buster Melancholia. It’s a sentiment echoed in the promotional poster’s tagline. As far as doomed marriages go, Justine’s (Kirsten Dunst) is dead in the water. There’s nothing to do about it. The world will end for her and everyone who RSVP’d. In the elegiac, Wagner-scored opening (similar to, but better than, the arty child-safety-ad-like intro that kicked off von Trier’s last one, Antichrist), a deathly-black reverie is aroused; it’s so slowed down that its visual beats match those of a dying pulse. Birds fall from the sky. A mother and child sink into a golf course. Paintings burn. Dunst conducts electricity, or so it seems. The narrative proper picks outs the obscure tidbits of depressive destruction in this prologue and proceeds to play the annihilation out: first on a family scale at Justine’s wedding, then on a total scale, everywhere, for everyone. Two blue planets collide oh so horribly and beautifully. This double image bookends von Trier’s best, most compelling film to date. Melancholia’s two parts (‘Justine’ and ‘Claire’ – Charlotte Gainsbourg plays the latter, the bride’s sister) show the effects of guttural, hopeless depression from Justine’s perspective on the “happiest” day of her life, and then during the fall out some undefined time later. It all occurs at the same mansion location (perhaps in Europe or maybe the US) without any interference from the outside world. That is, apart from that of another world itself. Von Trier is known to be a – perhaps self-regarding – cinematic card, both contentious and goofy. Here he’s the gloomiest of movie japers. A comic thread runs through Melancholia. But a sense of despair, of drowning in air, is the most prominent feeling we’re left with. The film, beginning to end, radiates a suffocating, uncanny aura. It’s calm yet somehow ominous. Wherever we are in their world, it’s evocatively rendered by von Trier’s skittish, searching direction (the best way to track his erratic, wayward bride) and Manuel Alberto Claro’s crepuscular, almost preternatural camerawork. It didn’t shift from my brain for days, weeks even, after seeing it. It’s still there, gnawing away at my empathy and resolve. I want to return to it as soon as I dredge up the requisite strength. It takes horsepower to get through it. But it’s worth every ounce of work put in. I enjoyed the time spent with it while it lasted.
Posted by Craig Bloomfield at 21:07 No comments: Links to this post 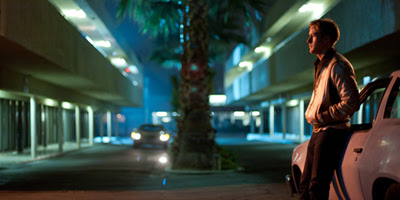 I wasn’t at all surprised that since its release, and perhaps even before it, Drive inspired a host of pop culture artistic responses — much like what happened with Donnie Darko in 2002 — all mimicking, paying homage or generally interpreting the film’s style. All the minimal posters, retro VHS covers, illustrations, comic book art and animations that it’s already influenced are a;most like playful fan-made extensions of the film’s story and characters; an attempt to acknowledge its universal impact. Drive was very much the result of a European filmmaker’s fascination with various strands of American popular culture. It’s a film commendably put together with references and nods to a whole grab bag of artistic influence: older films (the noirs of Preminger or Lang), relatively recent films (Friedkin’s To Live and Die in L.A. and, of course, Walter Hill’s The Driver); Pop Art painting (Lichtenstein); and fine art photography (Philip-Lorca diCorcia’s twilight city photos). Drive is a kind of ‘Pop’ filmmaking. It brings together a raft of pre-existing elements of mass cultural appeal and enticingly slots them into a familiar story arc. It reconfigures stylistic references and threads them into the bare narrative of a stunt driver (Ryan Gosling), his criminal associates (namely Albert Brooks' terrifying Bernie Rose) and the woman (Carey Mulligan) who he somnambulistically romances and fatalistically helps. And it’s all the more gloriously swooning, full of richly interesting and abrupt bright-dark tonal shifts, for it. It’s guys, girls and gangsters, all in and out of cars and trouble, presented as a series of savvy, abstract pick-n-mix conceits.

It works perfectly as a pop-crime movie; bubblegum chewed with bloodied teeth. The direction is pure comic book: Driver, hammer in hand, shot from below to look like an absurdly-jacketed statue, about to issue a mobster’s comeuppance; Blanche’s (Christina Hendricks) shocked face, framed centrally, in the backseat of a getaway car as, visible through the rear window, another car flips in the air behind her in slow motion; Driver’s rubber-masked face peering into a gangster’s storefront party, lit in blue neon and framed by a red glass window. These moments have the look and feel of panels from a non-existent graphic novel given movement. It’s a close approximation of film as fully fleshed-out storyboard. The lack of sustained dialogue seems to demand speech bubbles in the top corners of the screen. It’s an exciting, demented mish-mash of pop style. All those expressive artistic 'replies' are an encouraging sign that films like Drive can hit a deep nerve and make a certified impact, regardless of whether they reap big awards or attain mammoth box-office. Of course Drive has its admirers and its detractors. It’s divisive and very much open to extreme adoration or disregard: it’s ‘too cool for its own good'; it's a ‘refreshing genre exercise’. But it created a swift tear in the 2011 movie map like few other films. People embraced it and, from it, made their own versions. It's a film that may be long cherished and returned to time and again by its fervent admirers. I’ll gladly say I’m one of them.
Posted by Craig Bloomfield at 22:27 No comments: Links to this post