This is the first in an ongoing series of pieces on what I consider the best performances I've seen. I'll pick out the performances, both male and female, that have made the biggest impact on me. Whether it's through what I see as sheer incontestably great acting, or simply a role that has struck a particular chord - a character that's been funny, moving or just deeply memorable. These aren't in any qualitative order, they're simply random as and when I think of them. First up is:

Diane Ladd in Wild at Heart. 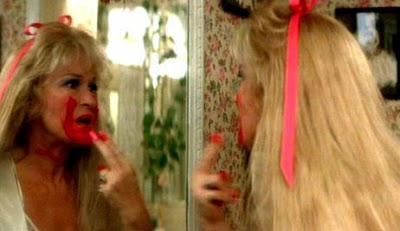 How to look good mental: Diane Ladd applies the slap all wrong in Wild at Heart

If Baby Jane Hudson had another, younger sister it’s a fair bet she would have turned out like Marietta Fortune. Diane Ladd’s performance in David Lynch’s Wild at Heart (1990) channels Bette Davis’ furious camp rage, heightens it, pumps up the volume a notch further and then layers it with a hefty dollop of extra-matriarchal evil: she’s vile at heart, and definitely weird on top. (The scene where she smears her entire face in red lipstick whilst holding a conversation on the phone puts paid to any notion of concrete stability – she’s also wearing pixie boots whilst vomiting in a toilet at the time.)

An early scene sees her forbid her daughter Lula (played by real-life daughter Laura Dern) from seeing her lover, Nicolas Cage’s Sailor Ripley, after warding him off on the phone (Marietta is often seen on the phone in the film: cut off, at a remove, and dishing out unreasonable demands) “You know who that was,” she warns Lula, “and you know that you aren’t, and I mean ARE NOT, gonnah see him ev-ah. End of stor-eh.” She barks the lines in her southern twang, holding up her hand, fingers stretched out in a gesture of catty defiance. 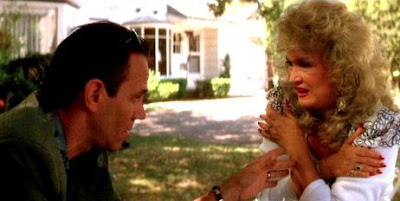 With her over-styled hair a cross between an Afghan hound and a failed Farrah Fawcet flick, the wardrobe of a Golden Girl and sharp pink fingernails clasping the stem of a martini glass, she then turns to the camera and, in extreme close-up, pierces the fourth wall with accusing eyes. She proceeds to scoff the drink as if she were imperviously downing poison. She’s challenging the audience as much as she challenges Lula. Marietta is the Mommie Dearest of the South, and no mistake – though she could have Joan Crawford for breakfast. Either that or simply have her rubbed out.

That we’re meant to see her as evil is never in question, but it’s a delightfully blazing and blackly comic kind of evil. A few fantasy moments even have her riding a broomstick and cackling high into the night sky as the Wicked Witch of the West – one of many allusions to The Wizard of Oz (1939) that Lynch peppers the film with. What I particularly love about Ladd in Wild at Heart is that she’s clearly having a full-blown private riot all her own in the role (and the film is already riot enough). She obviously relished the opportunity to go way off the rails. Although at the same time she appears to play it entirely straight. Ladd infuses Marietta with a shopworn realness beneath the loopy dark-hearted bitch; she manages to make all that wickedness both sadly believable and outrageously parodic at the same time.

If proof were needed of her sheer wonderfulness watch one of her earliest scenes, where she gratuitously (and drunkenly) attempts to seduce Sailor in a men’s toilet. “Oh Sailor, Sailor boy-eee! How would you like to fuck Lula's momma? …'Cause Lula's momm-ah would like to fuck you.” Her jovial audacity and determination turn to serious threat after he rebuffs her. Dejected and enraged, she warns him off Lula. “You’re gonna have to stop me,” Cage spits at her, and then walks away. Forcing the cubicle door open, Marietta disquietly snarls back: “That can be arranged.” And we know it can (Marietta is in league with some particularly nasty hitmen.) She sobers up quickly once she knows what’s at stake, what she’ll have to do to get her own way. Ladd brilliantly shows that an exultant, but insidious evil is always bubbling away just below the surface, right beneath the layers of garish electric-blue eye shadow and red, blood red, lipstick.

In looking back at Ladd’s performance – and I’ve done so regularly since I first saw the film in August 1990 – it’s actually a shock that she was nominated for both the Best Supporting Actress Golden Globe and Oscar in 1991. Very little about the film, especially Ladd’s turn, feels award-friendly. Of course she was never going to get the Oscar (they went with Whoopi Goldberg’s comic turn in Ghost (1990)), but a nomination went some way in proving what an indelible mark she had made. And true to the sly, opportunistic spirit of Marietta, Ladd actually lobbied hard for the nomination herself. Her cheeky, ballsy self-belief mixed with the intrepid, out-there performance itself made people sit up and pay attention (when you put in a part as searing and as nefarious as Marietta you’d insist people to take notice – roles like her don’t come around too often). 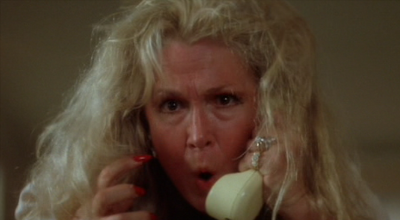 Disconnected: Ladd threatens to rip a call centre employee a new hole for wasting her time

Ladd has been exemplary in many varied roles over the years – the waitress in Martin Scorsese’s Alice Doesn’t Live Here Anymore, her Ida Sessions in Roman Polanski’s Chinatown (both 1974), Black Widow (1987), National Lampoon's Christmas Vacation (1989), A Kiss Before Dying (1991), as Dern’s mother again in Rambling Rose (1991) and another role for Lynch, as scathing talk-show host Marilyn Levens, in Inland Empire (2006). But for me, Marietta Fortune is the absolute standout of her career so far. It was the part that made me aware of how truly good Ladd can be, given the perfect script. But it was the subtlety she added to it that made it great acting: the tiny, crazy nuances, the ingratiating put-on baby voice when faking sincerity, the flirtatious but subtly vehement attitude in all things conspiratorial (“no tongue – my lipstick!”), and all her glamorously vain posing. It’s all the triumphant risks of a daring actress that made Marietta that extra bit special. Diane Ladd in Wild at Heart is, absolutely, rockin’ good news.