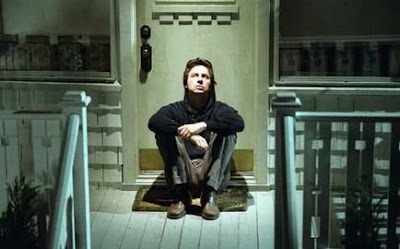 Zach Braff in The Last Kiss, giving us one of his life-affirming stares into the distance

One of fashion retail chain Gap’s mission statements has always centred on the idea of lifelong shopping: clothing people from birth to death. The characters in the Zach Braff film The Last Kiss (Tony Goldwyn/2006) seem to represent the Gap demographic perfectly: the film shows us a host of affluent clotheshorses variable in age, from babies to would-be grandparents. They all pout, gaze and flap endlessly in a listless manner that the film’s makers would like to think constitutes emotional interest and connection (or disconnection if the threadbare narrative is to be believed), but actually all this results in is 103 minutes of verbose trash of the most insular and hermetic kind. So, the feeling you get after having shopped at Gap during a Christmas sale, then.

The Last Kiss is one hair away from being a glossy coffee table catalogue full of middle-class whiners too self-indulgent to see beyond the ends of their own privileged noses. Braff and his three drifting chums (played by Eric Christian Olsen, Casey Affleck, Michael Weston) are on the cusp of 30 and find that “there are no surprises anymore.” So Braff hooks up with a younger version (Rachel Bilson) of his newly pregnant girlfriend Jenna (Jacinda Barrett) to try and discover himself. Or some such rubbish. What the film would like us to believe is that this band of buddies are so disaffected with their lives that they have invariably reached some kind of crisis. But in fact they are a sad-sack bunch of damp, spoilt cry-babies, too wet from all the man-tears they’re wallowing in and all the Coldplay albums they’re listening to to think about anyone else in their lives. Although I understand that this description clearly wouldn't have made a particularly sellable plotline. 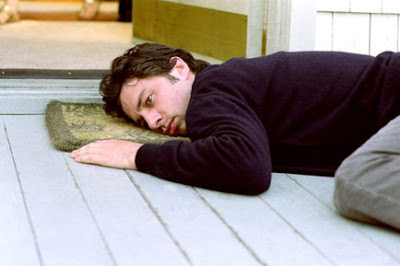 In fact, a woeful sense of disaffection rings throughout this whole indulgent excuse for Braff and co's introverted meanderings. Zack the lad's scared of commitment, see. Therefore fucking a duplicate of your girlfriend is the order of the day, ‘cause she’s, like, the same woman, only younger, and comes with a free mix CD (most likely featuring The Shins, Snow Patrol and any other dribbling alt. rock) for those Braff-only life-affirming stares into the distance from a comfy highly-paid architect’s couch, thus enabling him to relive the youthful, heady days of college abandonment. It allows him to find his true path. Bless the guy. All the while Jenna's parents (played by Blythe Danner and Tom Wilkinson) are going through their own rote, non-specific marital troubles, proving that happiness clearly isn't hereditary. Danner even has a spectacularly embarrassing, and therefore quite hilarious, breakdown scene of her own; one that involves her flapping her hands in front of her face whilst running on a treadmill.

Nobody here is content with the obvious abundance of luxury afforded them, especially Braff's well-off mates. The filmmakers aren't content with that either, so they pile on generic strife in an attempt to wring from us extra sympathy for them: one pal can’t get over his ex (and we are duly nudged to feel for him because the plot demands that his dad, uh, selfishly dies, interrupting his lovelorn brooding); another can’t cope with having had a baby, so leaves his wife to do all the work whilst he stares into the distance from a comfy, highly-paid architect’s couch (where he must surely be dreaming up an excuse for why he can’t cope with simple everyday responsibilities, because god knows the scriptwriter, Crash’s (2005) Paul Haggis, hasn’t provided one); another one of the pals actually seems ok with – Gosh! Shock! – getting on with life in the company of his female fuck buddy… well, that is until she suggests he meet her folks. By then he’s hotfooting it off to Mexico for a boy's own soul-searching jolly with the rest of them. God forbid anyone suggest these dudes do some actual work - they’d surely shit a brick.