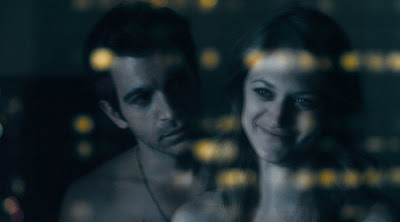 Never has nearly a month’s worth of illicit fucks been as dull as door mats. The riskiest thing here is a naughty rooftop drink binge, the most spontaneous thing the painting of toenails. Two strangers act up and make out in a random selection of hotels. He’s (Chris Messina, doing what Chris Messina usually does) a successful writer experiencing an unsuccessful second book; she’s (Marin Ireland, channelling Marion Cotillard by way of Sarah Polley) a married corporate accountant who “just pushes numbers around”. They’re both a bit unhappy; both seem to want to put the puzzle pieces of life together, mainly by repeatedly talking at length about how they don't know who the other person truly is. They continually meet up and occasionally have sex. But their post-coital conversations dry out the bed sheets and cool any adulterous ardour. Nothing much is ever truly said. Mostly they just mope deeply into each other’s faces. Director-writer Matt Ross should, but doesn’t, interpret his characters’ woes and desires. Glimpses of who they really are – through choice, telling snippets of dialogue or, say, some exploratory direction – are thin on the ground. (When there are just two people and four walls on offer the direction needs to wring the most pertinent interactions out of the situation.) Their personalities and past experiences, things that would make the drama flourish, are hemmed in as much as the outside world is shut out.

Over the course of these trysts she gets married, he divorced; she has a child, he has a breakdown, of sorts. They both have another bath or ten. But no emotional progress outside disagreeable mumbling and looking forlornly at beautifully blurry shots of cities through high-rise windows is made. Each chapter is divided up into the randomly-selected rooms they frequent. Room 609. Room 1205. Room 527. 308. 615. 1009. And so on – totalling the titular 28. By the twelfth inter-title I was hoping that the next room they booked would be 237 at The Overlook – let them feel the scary shag pile there and see what dramatic events emerge. (The whole thing needed something, anything, to give it some vital pep.)

Ireland better convinces as a more believable character than Messina. She often lets a suggestive glance or smirk tell us more than a verbal outpouring could. He likes to shout at people from hotel balconies. She messily gets out of the bath like she needs to find the nearest towel, as you do. He coyly gets out of the bath like he’s being filmed by a camera crew. Intimate hotel-room-set drama The Center of the World (2001) managed a similar feat of tedium, though with a few supporting characters to stem the dullness; so too did the similarly-themed 9 Songs (2004, review here), just with an, um, abundance of cum shots and music cues. Many people bemoaned Last Night (2010, review here) – in which a married couple experienced an eroticised evening apart, with other people – for being flat and lifeless, but it had more fervour and vibrancy in five minutes than this does over its entirety. 28 Hotel Rooms is innumerable sighs and twice as many eye-rolls over 82 arduous minutes. Hotel hook-ups shouldn't be as dreary as this.
Posted by Craig Bloomfield at 16:03