Familiarity begets familiarity. Trance is, in variable ways, most reminiscent of the likes of Shallow Grave and Trainspotting within Boyle’s filmography. Mainly in that it features his favourite protagonist plot position: the man in over his head in a situation beyond his control (also see: Slumdog Millionaire, The Beach, 28 Days Later... , Sunshine, A Life Less Ordinary, 127 Hours). The plot (an outline of which you can read here or here) has an immediate hook, an upfront showiness prescribed by a cool poster/promotion campaign (left) and, most likely, the word-of-mouth factor; the kind of things via which Trainspotting and Shallow Grave gained momentum in the nineties. We’re in typically characteristic Boyle territory. But really, what’s moved on? Haven’t we had this (kind of) film from him before? Familiar tropes and tricks and approach to narrative. The endpoint differs, but the journey remains the same.

Many directors reconfigure ideas previously ploughed in one way or another. Hitchcock, Lynch, Tarantino, Tarkovsky, pick one – pretty much every director repeats motifs, ideas, approaches. An auteur is an auteur is an auteur. But there’s a large gap between concrete auteurism and cyclical self-reference (and, perhaps, lazy repetition). Trance doesn’t feel like either an artistic or thematic progression in the way that some of Boyle’s other films have. It feels like a digression, or a time-filler, or at least a moment of treading water – a reminder that he’s a film director as well as the guy who ‘directed the Olympics’. For all its edgy showmanship it’s just a set of safe, self-same themes and reinstated narrative turns given a jolly polish. There was little here that was surprising, vital, entrancing. Boyle, along with his most notable peer Michael Winterbottom, is one of the UK’s most intrepid directors (look at where his films go in the world), but Trance is stuck in perpetual turnaround on home turf already ploughed. Boyle and Winterbottom are both venturesome filmmakers, but of the two Winterbottom is perhaps slightly more adept at self-reinvention. 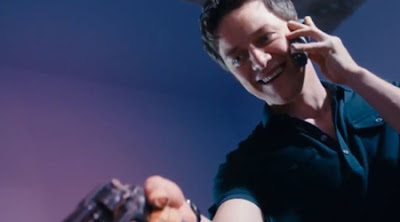 28 hours later... and I can’t recall anything noteworthy about the three main performances. A day or so after seeing it I had trouble recalling anything any of the main trio said or did. I don’t blame the actors. James McAvoy, Vincent Cassel and Rosario Dawson are capable performers who have given good performances elsewhere – Cassel in particular can be an electric presence. I blame the tricksy, blitz-you-into-bafflement structure. Trance’s plot is generally easy enough to follow, in a fashion, and the editor does a commendable job of ordering everything to get the best narrative sense out of the thing (whilst retaining its important ‘upending expectations’ vibe). But it was what I sensed to be Boyle’s need to make an essentially straightforward story inordinately kinetic that stunted any coherence in the performances for me.

There’s not that much to it, all told. The way in which Boyle and his writers Joe Ahearne and John Hodge set up and have shaped their plot creates an awkward discord and fogs how the cast perform, and largely curdling any filmmaking clarity. The cast get a handful of scenes to outline and explore their characters – their inner selves, their shady dealings, their emotional withdrawals, their manipulative switches – but the results are diced and dotted about, each one less creatively dovetailing into the next, smothered by another tricky piece of the narrative puzzle. Trance feels like an attempt by Boyle to take back the Bestest Coolest British Director crown passed over to Christopher Nolan circa Memento. The Inceptionising process of Trance zapped any fluency from the script. 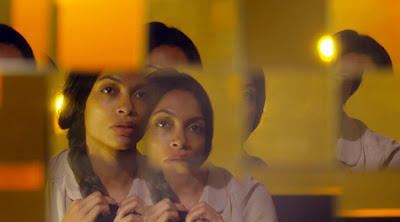 The Usual Suspects didn’t have a problem juggling a multi-faceted plot with seven main characters. Its Chinese-finger-trap narrative pushed and pulled right up to the last scene before it signed off with cohesive realisation. I always knew what kind of woman Laura Dern was, out of the trio she played, as I watched all of them cascade down Inland Empire’s knotty rabbit holes. Terence Malick’s sense of geographical and temporal place was shunted six ways to Sunday for 99% of The Tree of Life, but I still felt grounded by the people drifting through the film however much he made them appear as elusive signifiers. But the threesome’s actions here battered me into boredom. What’s a decent idea (HEIST WITH A DIFFERENCE!*) if the characters who interpret it appear to be thoroughly subsumed by it?

There’s an abundance of cranky, canted angles to infer mental displacement. Boyle’s neverplace London is a muted kaleidoscope of anonymous and/or expensive interiors viewed askew as if to strengthen illogic and reinforce dislocation. The directorial approach chimes with its thematic content, but is it just a lot of illusory cup-shuffling, all visual swagger masking an echoing core? Tom Hooper recently cranked and canted his Les Misérables cityscapes into submission and was roundly mocked by critics for it. But the much more respected Boyle’s skew-whiff camera trickery will likely pass unmentioned. Why is one risible and one passable? And exactly how many ‘cool points’ does one lose for marginally preferring the former’s use (it necessitates its characters’ desperation, however heavy-handed) over the latter‘s (it idly makes the action appear much more intense, urgent than it actually is)? 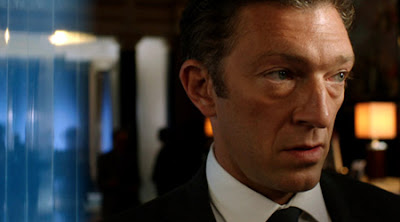 Trance trail. Boyle himself has mentioned Nicolas Roeg as an influence (perhaps due to the wired perspectives and the oddball sexual pull), and this makes sense. I also saw a smidgen of Guy Ritchie, most notably Lock, Stock and Two Smoking Barrels and RockNRolla. Also, to a greater or lesser degree, Eastern Promises (not only for the presence of Cassel), The Crying Game (no, not in the way you’re thinking), Shopping (largely forgotten 1994 Jude Law ram-raiding movie), Stormy Monday (Mike Figgis’ Brit-noir, his debut) and Layer Cake (which had better supporting parts and some humour). There’s a weird kinship with Steven Soderbergh’s latest, Side Effects, too (I think, whatever the intentions, both directors’ female characters are more convenient ciphers than actual fully-realised people).

If Rosario Dawson were to nonchalantly tear a page out of one of my favourite art books/plot MacGuffins, for little-to-no reason, I’d be livid. And I wouldn’t then do an ill-conceived impression of the caped figure in Goya's Witches in the Air (left) to appease her like McAvoy does.

If Boyle had, say, taken his name off the credits – for some kind of Dogme95 style larf – or if, for some ridiculous reason, people went to see Trance not knowing that it was a Danny Boyle film, do you think they might wonder why it hadn’t gone straight to DVD?

Boyle recently mentioned the need for better female characters, so why is the sole significant female character in Trance twice introduced in a given scene via a pan across/tilt up her naked body displaying her shaven vagina (for nefariously explained plot reasons)?**

Whether via Anthony Dod Mantle’s vividly retro cinematography, giving everything a slick yet businesslike sheen, the score by Rick Smith (from the band Underworld), with its reversive techno lilt, or the general throwback feel of Trance, there appeared to be definable zeitgeist-like hankering for late-eighties/early-nineties nostalgia. I’d rather see Boyle and co. move forward.

*Maybe Boyle wanted to “heist” some art himself. Maybe it’s a comment: “steal” a film (Trance was based on a 2001 TV movie of the same name written and directed by Ahearne), make a replica, and then display it in a different light. If this was the case, then surely he could’ve taken his own lead and – in reference to the stolen Rembrandt painting The Storm on the Sea of Galilee shown and discussed in the film – flashed us a subliminal cameo shot where he’s breaking the fourth wall with a glance – a Trance glance...

**A different nod to Winterbottom here: he did a very similar thing in both 9 Songs (with Margot Stilley) and Code 46 (with Samantha Morton).

Posted by Craig Bloomfield at 11:03