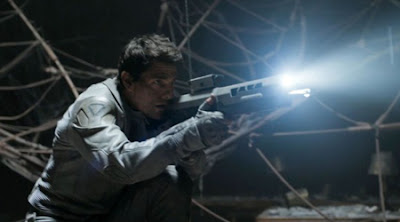 Tom Cruise is one of our premium movie stars. He lends his premiere star status this week to Oblivion, Joseph Kosinski’s follow-up to TRON: Legacy. Tom Cruise is Tom Cruise through and through here. Movie star Tom Cruise who headlines big action blockbusters like War of the Worlds and the Mission: Impossible quartet, not the once-in-a-while movie actor of Magnolia, Collateral, Rain Man. Oblivion doesn’t require a Cruise performance, as such; it needs a strutting, panicked Cruise action presence. He gives good combat and freak-out, that’s plenty enough. He plays his reliable go-to guy: the blue-collar worker type – called Jack of course – facing insurmountable odds. Jack likes unfussy, simple things: books, baseball, rustic cabins, Conway Twitty records. But he has to kick it into top gear to overcome feats of futuristic peril.

Jack and his co-worker/bed-sharer Victoria (Andrea Riseborough) operate a maintenance outpost on a destroyed and depopulated post-invasion earth. It’s a stunning home-owner’s wet dream of an outpost, however: austere on stilts in the sky, full of billowy curtains, glass surfaces, topped with a top-end technical finish. (It’s a dwelling so impossibly, stylishly open-plan with the potential for threat that I was expecting Diamonds Are Forever's Bambi and Thumper to jump out on Cruise at any given moment.) 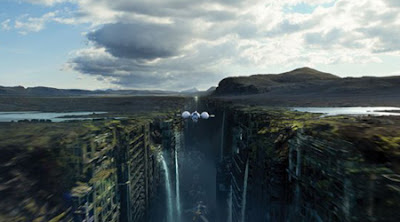 The pair answer to Mission Control Sally’s (Melissa Leo) orders; linked via a screen, she tasks them from Titan, a planet off Saturn, with clearing earth, saving its resources and repairing flying robot maintenance drones in between avoiding the hostile ‘Scavengers’ – all whilst readying themselves for a return ‘home’. Because the pair are nearing the end of their shift (“only two weeks left, Jack!”), of course something goes awry: a droid mysteriously goes missing and Jack discovers a strange woman (Olga Kurylenko) jettisoned to earth from a space shuttle. Who is she? Why does Jack feel he’s seen her before? Who’s got the droid? Has Cruise cracked a smile yet?

The plot from here on out becomes rather convoluted. Although it’s fun to play catch up with and, ultimately, it coheres better than first assumed. But it’s the creatively imagined world that astonishes most vividly. Vast, seemingly endless lush and/or ruined vistas – many of which are the very same Icelandic wasteland locations seen in Prometheus – full of expanse, substance and digital elegance are an visual treat. The effects are exemplary and integrated with seamless skill; eyeballs are dipped in unusual reconfigurations of slickly photographed known landmarks and inhospitable crevices. Credit to production designer Darren Gilford, cinematographer Claudio Miranda and, well, the whole technical crew for evoking sublime alienating earth landscapes. The score, by Anthony Gonzalez of M83 and Joseph Trapanese, a Daft Punk collaborator, thuds and fizzes with an electronic orchestration that aptly suits the visual splendour and compatibly meshes with the impressive sound design. 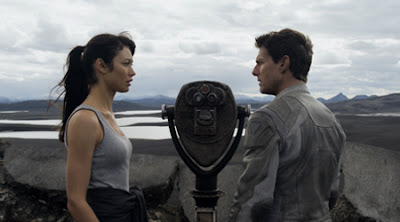 Cruise is on and off spaceships, bikes, buildings, peaks; he’s in and out of cavernous ruins, pools and hot zones. He applies the same level of manful adventurousness on screen as he most likely does in his leisurely pursuits on his days off. Oblivion being a top-tier Cruise vehicle – like, say, Jack Reacher, The Last Samurai, Knight & Day – it’s inevitably all about him and what feats of kinetic endurance he can master. And he’s still up to the task. He may not display a knack for characterisation in films such as this often, but he does bring star power and the guarantee of a hefty budget – via which burgeoning talents like Kosinski can project their long-gestated dream ideas with luxurious ease. (Oblivion was based on a graphic novel concept he first drew up in 2005.)

A fine supporting cast has been assembled too, however inconsistently deployed: Kurylenko is given a lot of elusive emotion to carry yet not the character to hold its weight; Nikolaj Coster-Waldau looks sturdy on the sidelines with a muck-smeared face; Morgan Freeman teeters on the comical side even though his role suggests otherwise; Melissa Leo is a ghost in the machine. It’s the ever-excellent Riseborough who stands out, however. She gives Victoria much measured poise and poignancy – and the most memorable performance of the film. The big shame, though, is that Zoe Bell is in the cast and isn’t given any big action scenes or stunts. 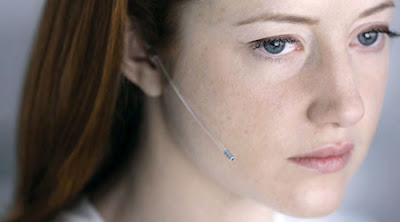 As with various recent grand-scale sci-fi cinema – Star Trek, Prometheus, Total Recall, Avengers Assemble, Cloud Atlas – Oblivion ponders big ideas alongside its sleek action scenes. To add some intricate flavour, Kosinski follows sci-fi law by peppering his futuristic environments with inventively realised state-of-the-art gizmos and gadgetry (the dragonfly-like pod ships, the spherical droids, the large polyhedron space ‘Tet’, Victoria’s iPad-style operational desk). Many of its ample thrills derive from the pleasure these tokens of design offer to viewers who like to embrace the sci-fi genre regardless of what hiccups or highs the story attains.

Oblivion is interstellar entertainment made with due craft and attention to detail, even if some elements feel over familiar. It’s the thrill of seeing spectacle writ large – particularly if seen on an IMAX screen – that provides the most enjoyment. Luxuriating in giddy genre joys is not always something that gets taken into consideration when, for some, the fun seems to revolve around the discovery of faults and numerous references instead of simply allowing the good times to play out in front of them. Sometimes giving the deeper fouls of plotting some respite and focusing on the wow yields more enjoyment. Oblivion isn’t Great Art, and it surely doesn’t ask for that label, but its apparent artistry meant I was willing to let it get away with a few ills so I could take in its glorious sites of extinction.
Posted by Craig Bloomfield at 20:29