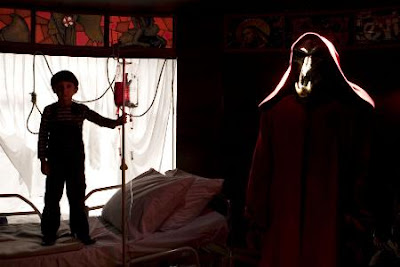 The Antichrist made a poor appearance back in 2006. 06/06/06 – the eye-rolling, conceptually-timed release date for the remake of ‘70s well-regarded devil-child flick The Omen – proved to be a redundant event, along with it being an equally redundant marketing ploy. I don’t think anyone cared, if they even noticed; those who did notice most likely greeted the concept with, a shrug and another mouthful of popcorn. (Although Mel Gibson should have tried a similar gimmick for his The Passion of the Christ movie back in 2004; releasing it on Easter Sunday accompanied by a limited edition range of chocolate eggs featuring Jesus’ winking face).

This oh-so-clever release date was the first dodgy step for director John Moore's remake. It’s a rather idiotic and lazy rehash, all told. Clammy-looking President's godson Liev Schreiber (does the man permanently sweat?) and wife Julia Stiles (whose face is so pale, luminous and circular that it seems to appear more lunar the more close-ups it gets) have a kid and he’s the devil: Damien, of course. If you’ve seen the much-better 1976 original then the story will be familiar enough. This update replicates the plot almost verbatim yet manages to fudge it mightily.

The first half of the film is rushed. This was an issue in the original, but events there were steeped in a dreadful, all-encompassing atmosphere that strained at the film’s edges to provide the audience with a close-to-terrifying tour through one family’s death trip courtesy, literally, of a brat from hell. The only signs of attempted atmosphere come in the form of a glaringly obvious colour-coded style of mise-en-scène that shows up director Moore’s misunderstanding of this devilish horror fable. The colour? Red, of course. From the promotional posters right through to the scarlet-tinted photographic palette, everything is red red red. It had to feature somewhat, certainly. But the experience of watching this Omen film was like a forced lesson in Film Colour Psychology 101. 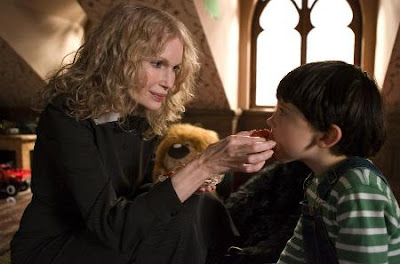 It’s one thing to attempt evocation by showing Damien disconcertingly wrapped up in blood-coloured bed clothes, or smartly dressed in a bright red outdoor jacket, as the smarmy conceptual trailer showed, but having such totally random items as – and these are random – tomatoes, toy British telephone boxes, every single plant and flower and the dresses worn by Moonface, amongst many other things, all in red is pushing the idea a bit too far. Don’t Look Now (1973) achieved this effect with just the one red coat 30-plus years ago.

So Damien is evil incarnate. We know this. But why shove signifier upon signifier onto the screen to keep reminding us. Oh, it’s a portent of bloodshed to come… or the very colour of death itself. Yes, got it. Instead of constantly upping the film stock level so that it creates the effect of watching the film through bloodshot eyes, why didn’t the filmmakers put some of that enthusiastic creation into lessening the dull thud that the script makes on the ears; each line is delivered with mounting vacancy that it makes somnambulists of the entire cast. (Although, on the plus side Mia Farrow, as mini-Beelzebub’s sinister babysitter, brings faint memories of Rosemary’s Baby (1969) with her, and the Thorn family maid’s fatal bungee jump off the mansion roof is still effective).

There are a few moments when Moore’s direction works. Some still shots are quite nicely studied, and create a sense of fearful unease: plastic-wrapped paintings and sculptures in a hollow mansion seem almost otherworldly; a stark bathroom with something sinister spied in the corner of a mirror; the optical, illusory, Escher-like Parkay flooring patterns in the Thorn’s mansion, and so on. But everything else here, including most of the actual action, is simply boring. And who thought a brush with the Prince of Darkness would induce yawns? The movie poster strap-line says His Day Will Come. If this remake is to be believed then we’re in for a much longer wait.