At the Cinema: Savages 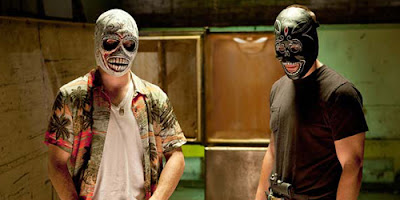 Note: this review contains one or two plot spoilers

I'm pretty sure Savages is the result of Oliver Stone raiding Hollywood's ‘lost and found’ box. It's musty, soiled, fit for throwing, but enough of a grim lark to warrant the time spent rifling through its funky wares. It’s also an experience I wouldn’t want to repeat any time again soon. Stone grabs from all over the shop and delves deeply into the crime-saga bargain bin, but sadly his enfeebled grasp of thriller tropes has become a bit slack since Natural Born Killers, his 1994 film that Savages bears a passing resemblance to and strives to match in furious tone and ragged texture. Aaron Johnson and Taylor Kitsch play a drug-dealing duo with a shared girlfriend, Blake Lively, who gets kidnapped by Salma Hayek’s Mexican crime baroness; they endeavour to get her back at any cost.

The story darts about, varying in tenor from scene to scene: some dully drag on with little impulse; others zip past with little time for the audience to notice that what Stone and his writers are imparting is conveyed with more complication than is necessary. Johnson and Kitsch make a dreary duo, despite their sun-ripened deportment. Neither one makes a strong enough impact as, respectively, a hippyish surfer and a hot-headed, er, well, psychopath. (It’s actually hard to fathom why these ill-suited guys would be best pals in the first place as no real arousal of their lives before this story is evoked and their relationship is solely conducted through chinging bottles together and some occasionally furrow-browed plot-shunting banter – although a brief throwaway exchange late in the film, curiously tinged with homoeroticism, is telling: “Have I ever said I love you, man?” Johnson utters. “Yeah, this morning,” replies Kitsch. When the girlfriend’s away, the boys will play?) 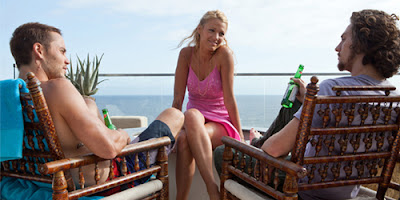 The supporting cast know their elbows, but not their arses. John Travolta’s (as a DEA agent) scenes have him verbally spout exposition that makes a frantic meal of the narrative; his character the most feels like a definite Tarantino influence. Benicio del Toro’s pervy, unwashed henchman seems to turn up to his scenes a full minute after his commanding moustache to intimidate his victims by eating their food and getting his cronies to do their gardening; he mostly reminded me of Steve Pemberton’s lecherous Greek landlord Pop from The League of Gentlemen. Emile Hirsch pops up in a pointless role as someone who sits at a computer and Shea Whigham cameos with a fair befuddled Bill Pullman impression as one of del Toro’s hits. Lively has the central role of O (named after Hamlet’s Ophelia; the famous painting seems to be hung on every cast member’s wall to boot) and is given the task of narrating the torrid tale with piffling but enjoyably corny diary-like platitudes. But unfortunately she’s essentially just a bargaining chip for everyone else to fight over more than an entirely rounded character. (An actress like Amber Heard would’ve put a feistier stamp on the role.) Best in show, though, is Salma Hayek, who, with little more than a wig and a frown, slinks through the film like a jewelled panther with a personal grudge. 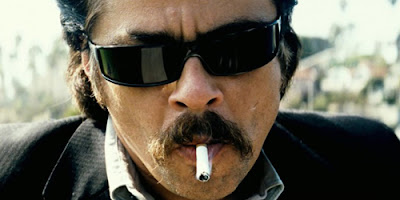 There is indeed some fun to be had here, intentional or otherwise. Several scenes are certainly wearing and meandering, only included to push the story forward in rote fashion. For example, a seemingly tense briefcase drop-off outside an abandoned, seedy neon-lit building promises excitement yet actually delivers dullness: it’s just a commonplace briefcase drop; neither shootout nor fist-fight enters into it, sadly, therefore missing a perfect opportunity to liven things up. Other moments bring inadvertent joy. The video of Lively gagged and bound and strapped to a chair, which Hayek sends to the lead dud-duo’s desktop, includes a “fun” explanatory animation of just how Lively will be decapitated if she doesn’t get what she wants. It made me wonder where Hayek found the time – between evilly lounging on her bed and ordering her minions around – to get this torture-cartoon made. Did she employ an in-house animator to do it? This kind of mundane aside kept me entertained when the main thrust of the plot failed to. But, really, the two most compelling scenes feature Hayek and Lively: one a chat over Skype, the other a chinwag over dinner. These refreshingly curveball moments break through the din of style abuse to let some substance flourish; Hayek essays a tender maternal streak and Lively exhibits traits beyond rich and bratty. Both scenes are like mini pools of open emotion amid an ocean of blokish blather. 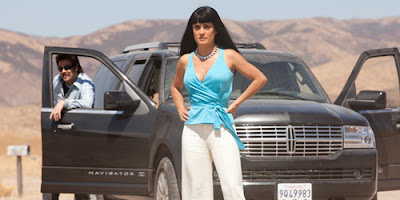 Although Savages never ripens into the fully-flushed, all-singing fiasco it teases to be, it does contain plenty of gratuitous daftness to keep the eyes happily rolling part-time. It’s never boring, despite some languorous stretches and a cheap final-scene rewind (which is little more than a cheeky and tedious way for Stone to embed an alternative ending alongside the given one instead of releasing it as a separate deleted DVD extra), and for the most part there’s enough sweaty momentum to shunt the whole thing along with requisite pluck. But it could have been a real mind-melter. Something for the cinematic sin bin we all like to scrape the bottom of once in every while. Stone could have gone for pure unadulterated thrills and made something even more OTT than NBK to prove he’s not only now fit for the kinds of debilitating dramas he’s recently been accustomed to churn out (like his dull W trilogy: World Trade Center, W., and Wall Street: Money Never Sleeps). Savages could have been Showgirls for the straight man if only it boiled at a higher temperature. But it repeatedly fizzles out and then thoughts of Smokin’ Aces enter the fray. Maybe Stone will go all-out balls-out with a crazier crime film next time around.
Posted by Craig Bloomfield at 21:08