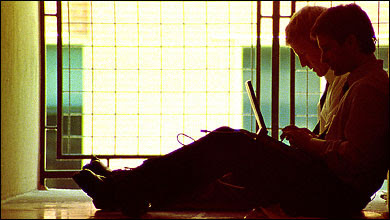 I couldn’t describe the plot of this film if I tried, but I’ll hazard a guess: a couple of guys, Abe and Aaron (David Sullivan and director Carruth), are working on a machine in their garage that could possibly send objects, and hopefully people, back in time. It’s made out of refrigerator parts and various bits and bobs around the house, and makes a weird humming noise – its look is part metal box and part… I don’t know quite what. The two send themselves back in time, duplicating themselves in the process, and then have to spend hours, days locked away in a pre-arranged hotel room for fear of something terrible happening with either guns, deception or each other's psyches, or indeed a combination of all three. Things inevitably go wrong, but where, when and how remained a mystery to me, right until the credits.

Conceptually, it's akin to Darren Aronofsky's debut, Pi/π (1998), but without its anarchic driving force or sullen atmosphere, mixed with In the Company of Men (Neil LaBute/1997), though without LaBute's acute observations or jagged cruel streak. Both those films, whilst not complete successes, were better examples of insular, low budget filmmaking. And recent inventive Spanish thriller Los cronocrímenes/Timecrimes (Nacho Vigalondo/2007) royally trumps Primer in the twisty-turny-time stakes. Vigalondo's film plays its time travel games with more conviction and, more importantly, with a sense of fun. There is little that lightens the mood in Primer - a humorous touch, or even a few jokes here and there, might have added a bit of charm to the film, and may gone some way in unseizing the impervious grip it has on itself.

The script is so impenetrable that it’s really hard to fathom what it is exactly about. I’m not being defensive in my obtuse reaction and lack of understanding of the film, but Carruth is totally and utterly unconvincingly restricted in his aims to produce a story with access for viewers outside of its, most likely, in-the-know circle of computer-math geeks. (And the fault ultimately and solely lies with Carruth alone - as well as directing, he cast, edited, designed, did the music/sound and produced the film.) Its appeal surely lies with the few - and I mean very few - who can actually say that they grasp what’s going on. In the respect of a film wanting to reach a universal audience (and most films, especially those low-in-budget-desirous-of-box-office, should, yes?), Primer spectacularly fails. 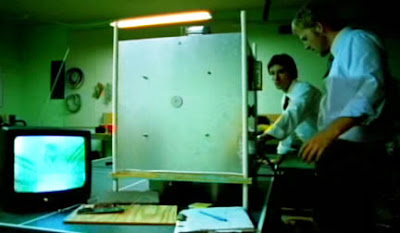 On the good side (limited to some technical attributes), the inventive framing of many scenes is nicely achieved: offices, garages, storage boxes and hotel rooms are all disconcertingly depicted as claustrophobic prisons, both backing up the theme of privacy and containment and formally mimicking the look of the box-like time-travel-gizmo that the characters create. The photography is good too: the low (reportedly $7,000) budget extends to some atypically grainy, often warm images that counteract the gloomy locations and gives them a lived-in feeling of some authenticity.

Ultimately, I just couldn’t get involved with characters who are smug, self-appreciating, middle class WASP boys in business get-ups, who confer endlessly about their secret little endeavours. Kudos, certainly, to Carruth and co. for making a film with very little money – and with a great sense of commitment and determination for their story - but maybe they should have thought that a great number of other people just might not feel included in their sealed-off band of tech-heads. Making it for themselves is fine, but I'm unsure as to whether they should expect many people to care less. It’s primarily very much a film for fully-commited number-crunchers, who consider incomprehensible technical babble to equate meaningful perceptions on existence. Although by no means rote, it's a math lesson I could've easily skipped.
Posted by Craig Bloomfield at 13:22 No comments: