The film’s plot is of the familiar day-in-the-life, to-and-fro type: Ross (Jason Swartzman, badly miscast) is having an odd, bad day. He drops in to see Spider Mike and Cookie (John Leguizamo and Mena Suvari, both overacting wildly) with some kind of drug score in mind, and thus gets to hang out with fellow hangers-on Nikki and Frisbee (Brittany Murphy and Patrick Fugit, highly irritating) in the interim. After this he ends up running errands for drug baron, The Cook (Mickey Rourke, unintentionally funny), and then tries to get back in contact with his girlfriend. Clearly things go from bad to worse and back again, just to get to some kind of resolution. And this is all it does really: one drug-related encounter makes way for another, then another. And so on. Scene after scene of increasingly tiring mishap. When a film credits twenty different producers it sets a few alarm bells ringing. Whether associate, executive, or just a plain vanilla, producer, it makes you wonder why so many cooks were needed; did Spun have a strained production maybe? Whatever the reason, it all makes for an unappealing, tasteless broth.

The director, Jonas Åkerlund, had made many music videos and short films prior to the film. Some (Madonna’s ‘Ray of Light’ for example) contained an enjoyably rapturous sense of fun; others (namely The Prodigy’s ‘Smack My Bitch Up’) were puerile attempts at replicating and/or subverting the quickly waning MTV-style of glossy degradation-chic. In fact Spun looks and feels like an extended music video, which contributes to its disposable feel; it's one idea stretched too far, especially when Åkerlund has tried similar tricks elsewhere to varying degrees of success.

Indeed, this type of gimcrack filmmaking has been done countless times before, and this one’s another, superfluous, entry. If you’re after TV-obsessed trailer trash, watch Pink Flamingos (1968) (which Spun seems to want to blatantly, though weakly, make homage to in some scenes); if you want strung-out teens and over-exposed faux-gritty cinematography, then check out Gregg Araki's just as vacuous and throwaway, though infinitely more interesting, The Doom Generation (1995) or Nowhere (1997) (both of which Spun aspire to); if agitated editing, sped-up footage and copious drug ingestion are your bag then Requiem for a Dream (2000) should’ve given you enough to last a lifetime. The list could drag on. It shows up the awfully vast parade of previous contenders in this film’s overcrowded lineage. Spun goes beyond homage: it’s literally a sketchy patchwork of other, sometimes better, films. 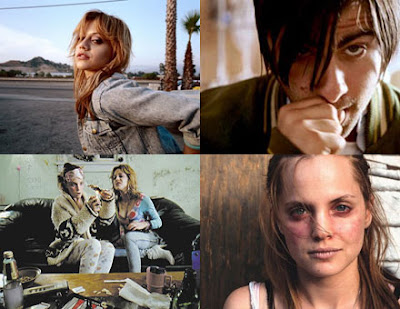 This rehashed feel extends to the choice of cameos, too. We have porn star Ron Jeremy, Judas Priest frontman Rob Halford, Smashing Pumpkin Billy Corgan (who provides the soundtrack), American History X (1998) director Tony Kaye and – in an extended cameo – Deborah Harry, who has the one and only half decent line in the film. Sure, all are cultish figures, but it really would be a good idea to give them something to do once you have them in front of the camera. Attaching their names and having them simply turn up on set doesn’t guarantee that their credibility will rub off.

One suggestion might be that all this faux-chic, debased and apathetic movie wants to do is to pass comment on ‘00s US indie(ish) filmmaking trends, to show the how devalued the quality of life for contemporary teens might be (maybe they’re imitating their atmospheres, spitting back out what they consume on TV). But it doesn’t even, at any point, make any halfway interesting observations to this effect. The thing is, you have to do more than just show this in a snazzy way, otherwise it just falls prey to the trappings of needlessly trendy excess; a feat that Spun achieves well. A film that really wants to make a valid point – or even one that just intends to thoroughly entertain - should surely value the need for some kind of proper content instead of merely relying on over-stylisation, and contain kinetic thrills instead of flippant and tiresome overused visual gestures.

It has some, erm, choice plot contrivances: one character leaving a woman tied to a bed for almost the entirety of the film; another woman defecates whilst her lover pleads for sex (shades of Harmony Korine?); a spotty teen gets randomly shot in the groin (shades of Tarantino?), and two checkout girls getting repeatedly slapped, all for no discernible reason. I didn’t see the point. Surely even the teen market wants something more substantial than what Åkerlund offers up here. That they get this seems like an insult to their intelligence. This is utter hateful rubbish.
Posted by Craig Bloomfield at 22:12