There's a lot to like about Ted Post's unusual family horror-drama The Baby from 1973. There's a lot to look downright perplexed about too. But then that's part of why it's a true one-off gem of wrongness. (Click the linked title for plot etc.) But what I liked the most about it was the brilliance of Ruth Roman. She gives one of the most wicked, snarling, all-consuming performances of the '70s as Mrs. Wadsworth, a matriarch so maniacally warped as to make the idea of Divine playing Mrs. Bates seem like cosy casting. Roman's simply superb here. She gives the role her all. She works wonders with crazy hair, blue roll-neck jumpers and a permanent scowl. In fact the movie has eye-popping performances from all the women: the two demented sisters, Germaine and Alba (Marianna Hill, Susanne Zenor), and Anjanette Comer as social worker Ann. They're all ably backed up by a great score by Gerald Fried, which is all sinister, abrupt cellos with a few '70s pop hits peppered throughout. 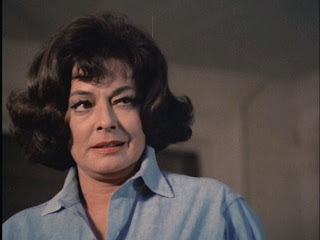 But another surprising and well-considered aspect to Post's cult curio is its ending: it has one of the best twist endings I've seen. It puts the likes of M.Night Shyamalan and The Usual Suspects to shame. I didn't see it coming at all, despite it actually being – in hindsight – blindingly obvious throughout as to what will happen. It's not even careful misdirection on Post's behalf, as we're essentially told everything we need to know, yet somehow I just didn't notice it. Good work from everyone involved.

Watch this genuinely oddball flick if you're interested in seriously bonkers '70s cinema of the most scurrilous kind. It also has some barking mad, corking dialogue, too: "Whada' you mean nothing happened?! I come home and you got your damn tit in his mouth!!" says Roman at her batshit-crazy best. Clever, funky, tawdry and so so good at being bad. It deserves a lot of overdue praise and an indecent amount of fresh adoration. 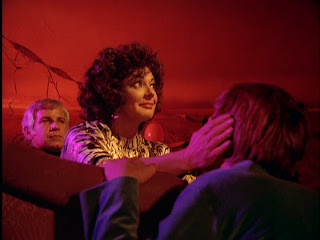 More Ruth Roman wrongness in The Baby
Posted by Craig Bloomfield at 19:45