At the Cinema: The Hunger Games

Keep your eyes peeled, there are one or two minor spoilers mentioned below

Based on the popular sci-fi adventure novel (the first in a series of three) by Suzanne Collins, The Hunger Games has a premise partway familiar from a grab bag of other films. Name checks can be, and surely have already been, made: The Running Man, Battle Royale, Series 7: The Contenders are a few points of reference. (I’d throw in reality-telly Russian roulette-a-thon Live! and a dash of both The Beast Must Die and The Most Dangerous Game, for some – possibly apt, possibly tenuous – value too.) Many of these are perhaps easy comparisons, but certainly viable ones. Gary Ross (directing from his script co-written with Collins and Billy Ray) sets the film out as a tidier televised version of a dystopian death contest; its family-friendly slant is as per the very likely request of the cash-eyeing studio; an insurance that the target audience will transfer from book to film with requisite ease. 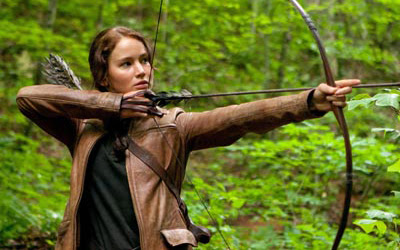 The premise has bold elements of grim sportsmanship: in a future America 24 teens from a range of impoverished districts are pitted against one another in a fight to the death; one victor will survive, leaving 23 young corpses in his or her wake. The film gets around the troublesome conundrum of being too gory by being too tremulous: Ross suffers from a case of the ‘lazy shakes’. When his quaking camera isn't hovering on the periphery, it’s frenetically tailing his characters in search of visual pep to add extra panic to proceedings. This displays flashy technical know-how and, more crucially, an avoidance of anything too bloody – Ross can dart away from a youth getting knifed or hacked down as he pleases – but it regularly stunts the atmosphere of many scenes. Artistic hysteria doesn’t always equate aesthetic coherence. Of course these occasionally coy camera pans are par for the course, but it leaves the film feeling half-cocked.

Lead Jennifer Lawrence, as heroine Katniss Everdeen, conveys the fear of ambush and imminent peril well, and she gives each scene her all. Although she’s only really entrusted to expand upon the blankly determined innocence she embodied so memorably in Winter’s Bone. Her bright yet anguished face gets plenty of screen time (Ross knows she has star potential), but she doesn’t get too much opportunity to emotionally or physically vary what she does: where’s a truly kick-ass, pained Katniss? There are hints to her game complicity throughout, but these aren’t elaborated upon at any length. She's a skilled archer, and clever with the tricks of survival, so instead of merely being the focus of all the film’s noble suffering she might have been given the chance to show the more calculating, duplicitous side. (There were glimpses of it when she was on the TV show with Stanley Tucci.) I don’t know how she compares to the character in the book, but I wanted more sneak and shifty trickery from her; she could’ve been a heroine with more shading to her personality. 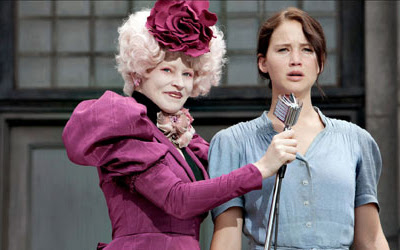 I wish that the film had a dash more personality overall. There are a host of characters, though few stayed in my mind for longer than the duration of, say, an extended ad break. With such an estimable cast of character/supporting actors – the main reason, if I’m honest, that I went to see it – the scope for a delectable cameo or two was vast. No one, despite appearances, gets to add their tuppence worth of actorly pizzazz however: Woody Harrelson hides behind a bad wig and bourbon breath; Elizabeth Banks makes perky priggishness her sole trait; Donald Sutherland snoozed his way through a mere three brief scenes; Stanley Tucci was one wink shy of a mid-week lottery show; and Toby Jones didn’t even, I don’t think, finish a whole line reading. The casting director could’ve expanded on the inclusion of musician Lenny Kravitz in the cast: how about getting Axel Rose to commit to what Harrelson only touched on; have Lady Gaga flitting her way through Teenkill Bootcamp in killer pink; why not dig out David Bowie to preside over Panem instead of Sutherland; and why not replace forgettable Wes Bentley and throw in that guy from Maroon 5... who likes just like Wes Bentley? This type of cracked casting may have raised worries and eyebrows but it might have also lubricated the filmmakers’ cynically savvy poke at reality TV mores (exemplified by the likes of The X Factor, Pop Idol etc). 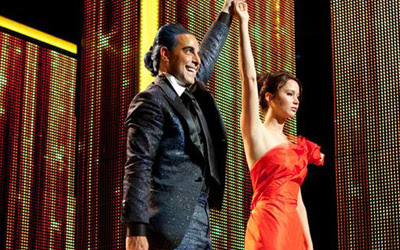 The TV angle – the commentary by Tucci and Jones – was actually what The Hunger Games needed less of. Their purpose was a specific part of the film’s cultural criticisms, but narratively it was a cack-handed move. A scene would be set up with visual pointers or hints to what might happen (i.e. the scene with the hornet’s nest), then a cutaway to Tucci and Jones explaining what’s highly likely to occur next; cut back to the action – and there we have it! They were right. They are doing their work as commentators, sure, but they eradicate the visual storytelling. This fudged, sequencing of events happens several times over the duration of the main ‘game’, and it robs the audience of surprising elements, limiting the players, central characters that the audience have invested time in, to drones acting out predisposed tasks. Didn’t the pre-emptive loudspeaker interruptions/prompts do this job already, and with intriguing scope for some psychological mind games? Why the need for added exposition? The target audience – any interested audience – surely isn’t shy of the curious powers of narrative deduction. The makers don’t appear to trust us to see it play out as it should unaided by blather. The many narrative snafus that bog down The Hunger Games occasionally make it less an adventure, more a trawl; more intensity required, less... sitting around in forests. There are escapades enough elsewhere to counteract the moments of narrative foul-up, but they are intermittent and, perhaps, not half as captivating as they were in the book?
Posted by Craig Bloomfield at 13:32