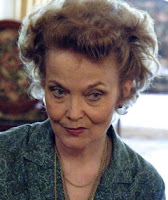 This week my "Take Three" column (every Sunday, three write-ups on three performances in a supporting/character actor's career) over at The Film Experience features Grace Zabriskie in The Passion of Darkly Noon, The Grudge and Inland Empire.

It was Grace Zabriskie’s 71st birthday last week. She’s achieved a lot in her vast career, with over the 34 years of acting: she had a daughter with oversized thumbs (Even Cowgirls Get the Blues); paid River Phoenix for sex (My Own Private Idaho); been killed by Chuckie (Child’s Play 2); ran on a brothel  (The Brothel); evangelized about vampires (Blood Ties); had a asteroid named after her (Armageddon); performed a voodoo sex-killing (Wild at Heart); fought for workers' rights (Norma Rae); navigated b-movie space horrors (Galaxy of Terror); and turned mourning into a mad maternal art (Twin Peaks). And that's just ten of her 93+ screen roles.

Take One: The Passion of Darkly Noon (1995) Mad maternal mourning aptly fits Zabriskie’s part in Philip Ridley’s strange fable, The Passion of Darkly Noon. She plays a forest-dwelling recluse named Roxy, who has only a shotgun, a Rottweiler and her own unhinged beliefs to keep her company. The film is a sinister hotbed of religion and retribution set in a secluded and surreal Southern state. Roxy believes her estranged daughter Callie (Ashley Judd) to be the witch who led her husband astray, and a force to be expelled from her uneasy Eden. When Darkly Noon (Brendan Fraser) stumbles upon her trailer home, she encourages him to do just that. “I am still here,” she tells him with teeth-gritting fury, “waiting for her to be punished.”

Read the rest here
Posted by Craig Bloomfield at 19:22