This week my "Take Three" column (every Sunday, three write-ups on three performances in a supporting/character actor's career) over at The Film Experience features Danny DeVito in Ruthless People, The War of the Roses and Batman Returns. 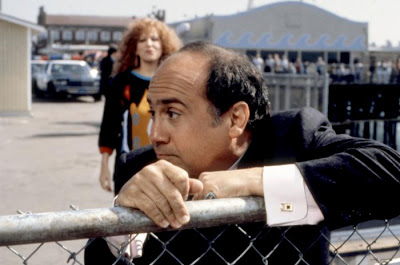 Take One: Ruthless People (1987) DeVito wants Bette Midler dead and gone in Ruthless People. The sooner the better preferably, with a minimum of fuss and personal expense. Sam "spandex mini-skirt king" Stone's wife Barbara (Midler) is kidnapped by the nicest people to ever venture to the criminal side, Judge Reinhold and Helen Slater. When, over the phone, Reinhold relays his strict rules regarding heiress Barbara's ransom, DeVito’s face brightens by the minute at the idea that she will be killed if he disobeys their orders or if any police intervention is suspected. Cue a fleet of cop cars and every news channel in LA reporting on the story. Cut to: Sam popping a champagne cork with filthy glee...

Read the rest here
Posted by Craig Bloomfield at 14:31