Earlier this week I wrote about two performances from the 1990s for a blog 'performance showdown' at Encore's World of Film. Here are slightly longer versions of both write-ups. 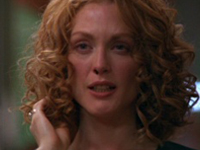 The most crucial aspect in conveying the neutral, sterile atmosphere of Todd Haynes’ Safe was having the right actress to play its figurehead, Carol White, a suburban Californian “homemaker” suffering from ‘20th Century Disease’, or, in other words, an allergy to just about every single thing in her life. Without the perfect Carol Safe wouldn’t have worked. It required an actress willing to give herself over completely to the role, to perfectly embody the film’s enigmatic tone. Julianne Moore innately understood that to show the effects of an elusive condition, a fear of the world that may indeed be psychosomatic, she needed to fade into the film, not overwhelm it. Moore is often filmed in extreme long shot, vulnerably positioned at the very edges of the film frame so that, at times, it’s hard to make out if she’s actually there at all. She became the blankest of surfaces and let the film enfold her, freezing her in place. She has no grandstanding moments in which to act showy; it’s not that kind of performance. But Moore took risks in her approach to the character. Full access to Carol isn’t easily granted through what she does. The familiar, archetypal housewife of movie tradition evaporates. By playing an indistinct protagonist Moore dares us to distance ourselves from Carol by remaining largely inert, quietly battling her environment at the extremities of the screen. What she gives us of this unfortunate woman is a timid presence, a blur; we have to look hard to find the person right in front of us. Carol, pinned in position in her living room, in her car, in public and in her own mind, remains an unidentifiable figure. Moore inherently ‘got’ Safe. She understood Carol from the outside in. And in the process gave one of the best film performances of the last twenty years. 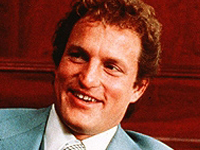 More so than as a Boston bartender, a white man who couldn’t jump, a guy who accepts an Indecent Proposal, a Natural Born Killer or a bowling Kingpin, Woody Harrelson excelled in The People vs. Larry Flynt. He’s the type of actor with the right cracked spirit and gumption to fight screen battles as notorious Hustler creator and entrepreneurial free-speech crusader Larry Flynt, a role for which Harrelson bagged his first Oscar nomination. (He really should’ve won; scan the competition and tell me he wasn’t best in show that year). He sat high and mightily pissed off as Flynt, so clearly relishing the grand gestures, chewing on snappy dialogue (sounding gloriously like a submerged Jimmy Stewart in later scenes) and saucy interludes. As ever, Harrelson utilised his cocksure star persona, and subsumed it into his performance just enough to let us know what a good time he was having. It’s certainly one of those all-consuming, span-the-decades biopic performances – the kind of thing you see year in, year out – albeit one with a lot more fury and a lot less dither and fuss than the majority of such ‘big’, look-at-me-Oscar-voter turns. It wasn’t Flynt mimicry, nor was it noticeably overly methodical. Harrelson was pained, scrappy and all the time kicking against censorship with fervour; always an awkward and insouciant bastard, but someone who you could vie for as well as take umbrage with. He made the role so much more than merely an opinionated firebrand in a wheelchair wearing handmade stars and stripes nappies and spouting audacious statements to a courtroom. It’s a bolshie performance, a lived-in performance and, most of all, an immensely joyous performance. As the man says himself in the film: “You don’t wanna quit me, I’m your dream client: I’m the most fun, I’m rich, and I’m always in trouble.”

Posted by Craig Bloomfield at 20:52