Michael Winterbottom’s candidly explicit 70-minute digital feature 9 Songs (2004) caused controversy when it premièred at the 2004 Cannes Film Festival, due to the portrayal of real sex performed in the film. The story revolves around Matt (Kieran O'Brien) and Lisa (Margot Stilley), who meet at a concert and embark on a brief, intense affair, which is depicted in all its graphic and intimate variations. The narrative is composed of a numerous series of spare, interwoven vignettes: the couple having sex in Matt's flat; specially-shot footage from Brixton Academy gigs featuring the likes of Primal Scream, Franz Ferdinand and so on (with a one-off Michael Nyman performance thrown in for a bit of variation); and Matt recollecting events from his work post in the Antarctic. The plot isn’t of high importance: it’s not so much what happens, but how it is shown. After Matt and Lisa first meet, it's wall-to-wall sex (save for the above interspersed narrative diversions).

The idea to examine the realisation and consequences of a particularly hermetic sexual liaison, money shots and all, is a fresh and welcome decision. Many filmmakers may not possess Winterbottom’s audacity here, although Patrice Chereau's film Intimacy tried a similar approach in 2001 (and John Cameron Mitchell's Shortbus pushed the 'real sex' angle a step further in 2006). Scenes of the couple idly chatting in bed are filmed in a very loose style and have a slightly vérité feel. The photography (by Marcel Zyskind, who works regularly with Winterbottom) is accordingly luminous, bathing the actors in warm hues of yellow and orange. At times it was reminiscent of Nan Goldin's photographs from the late ‘70s: lovers depicted in varying states of sexual and emotional openness, eyes gazing beyond the frame in knowing recognition.

We obviously have more information than that provided by a still image, however. Our minds aren't allowed to wonder what may have taken place; we are shown every intimate, revealing detail. There is (visual) description where there could have been suggestion, and very little pause for reflection – either the couple’s or the viewers’. The wholesale explicitness isn’t always a negative thing: by allowing his camera to almost brush up against the pair during sex, Winterbottom urges the viewer to almost become implicit in their actions, to near-as-dammit feel how closely and instinctively connected these relative strangers in fact are. It's as if he wants his audience of reluctant voyeurs to be drawn out of the dark cinema and into his camera's direct glare, to admit that in the act of watching strangers in "porn" the closest viewpoint is the only one possible to fully absorb the intentions of his imagery: it's either the back-row or the front line. This does indeed allow for a more thorough, visceral sense of how deeply involved with one another Matt and Lisa are, and how we might question our distanced view of them, but it also smacks of the director drooling over his subjects. The line Winterbottom treads here is thin, but what he suggests is certainly worthy of analysis all the same. 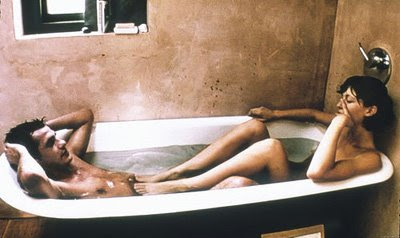 There is a fundamental lack of development of the characters as modern, upwardly-mobile everyday people. However heightened or idealised the sex portrayed is, these two are positioned as more than anonymous porn actors (they are surely essentially intended to represent any sexually-experimental, random heterosexual couple). The sex may be real but their personalities are unremarkable and go unexplored: if they have full lives outside the relationship, we're none the wiser. What importance their jobs or families have goes unquestioned. I wanted to discover more about them besides merely what bands they liked or how trendy they were. Although a perceptive character study clearly isn't the major focus here, a better degree of character definition would enhance further interest in them as fully-functioning sexually active individuals, not just as superficial vessels for fucking.

The script veers between blandly descriptive and immature. At one point during a gig, Matt remarks: "in a crowd of 5,000 people, you still feel all alone." The quality is that of a sulky teen committing thoughts to a diary. The use of narration (confined to Matt alone) gives the film a certain structure, but no true insight is provided and it gives predominance to his character. A voice-over for both characters may have provided an equal weighting for Lisa, too. Either that, or have no narration at all. As it is, it's too infrequently used to make much of a solid impact anyway. And why make the characters' inner thoughts outwardly explicit if they are as lopsided and cringe-worthy as those already on display in the spoken dialogue?

If Winterbottom had defined the characters (and given them more room to be real sexual and emotional individuals, as opposed to merely infatuated, meandering strangers) and discarded the unwieldy tone of the Antarctic soliloquies, the film may have achieved its aim to show how sex - and the endless possibilities of desire – can affect two people in a way that can alter their lives. It’s a bold yet elusive film, with a palpable undercurrent of real kinkiness to it. But ultimately it perhaps charts one song too many.