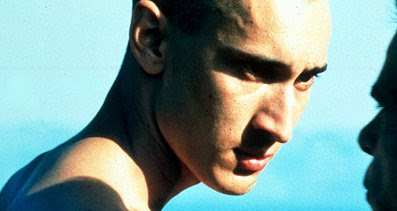 A while back I watched my first two films by two of France’s most celebrated and polemical female filmmakers, Catherine Breillat and Claire Denis: Anatomy of Hell/Anatomie de l'enfer (2003) and Beau travail/Good Work (1999), respectively. I saw them a few days apart, and whilst they didn’t have an enormous amount of clear-cut commonalities, they do share some ideological concerns. I guess I couldn’t help but view them as counterpart works in some respects.

An apparent connection I found when watching them consecutively – apart from the fact both are fascinating films from the controversial doyenne-duo of French cinema, and likewise ripe for analysis – prompted me to view them as near similitude to each other. Seeing them in such close proximity cemented the fact that both films are essentially about looking, above all else; specifically, they focus on how other people look at other people (and we looking at them both). But while Anatomy was a rather hollow exercise rammed forth with pretentious impassivity and muddied visual bluntness, Denis’ film was all fleshy cogitative swagger, enhanced by a crisply aerated clarity of image. Beau travail was also the sharper of the two in terms of what it means to be repulsed and fascinated at the same time by an exotic other. It burrowed a bit deeper. Further comparisons may or may not exist, other than the notion of visual (dis)pleasure, but Denis' was by far the better work. The act of looking is more evocatively investigated; its images have a lasting impact.

It’s indeed a handsome film to look at in formal terms. Denis’ favoured cinematographer, Agnès Godard, provides Denis’ camera a languorous and analogical look at male beauty and weakness, as filtered through its main character’s (Galoup, Denis Lavant) mostly idealised recollections. He narrates the story of his time spent in the French Foreign Legion, situated in the Gulf of Djibouti in Africa, where he leads the troops in training. Endless shots of bare-chested men running, mock-fighting and sweating through assault courses are frequent. 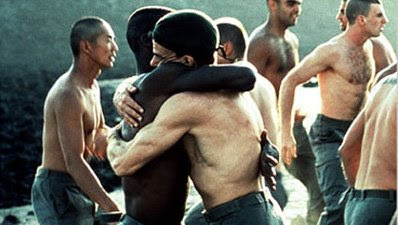 Denis’ camera adores these men. She tracks them in their daily grind at every juncture; the camera practically caressing their bodies as they train. From early on it’s evident that Denis is gradually developing an erotic fascination that is both incredibly distanced (in formal terms; her camera is physically at a remove from her subjects) and unfalteringly intimate at the same time (intimacy through the sense of sight alone). We know exactly how athletic each man is, how their bodies contort and their muscles flex, but we never really hear them talk, apart from snatched moments of idle conversation – It’s as if Denis is disallowing us any verbal distraction from the imagery; she’s nudging us to get our eyes to do the heavy lifting.

But if we don’t know much about the men’s inner lives, it’s because Lavant isn’t interested in them, not Denis. Events are somewhat skewed through his selective memory. That is, apart from his fixation on Sentain (Gregoire Colin) a soldier who inflames his repressed lust and occupies his singular gaze; this infatuation is a result of envy mixed with his craving the attentions of Commander Forestier (Michel Subor). Lavant is clearly in love with Sentain, and his strange and unjust treatment of him speaks volumes about the hierarchy of power these men adhere to. It’s very much about unspoken desire, of course, but we can’t seem to access it, just as Lavant can’t, or won’t, accept his feelings on any level apart from through the cruelty of furtive (though infertile) glances. But to say this is all surface longing is wrong, as what we can’t glean from the characters themselves, we piece together through the way in which Denis films them.

Landscape plays an important part in the film, too. Denis grew up in Africa (though now works out of Paris) and she clearly knows the setting well; the imagery is grounded by a great sense of place, and is as assured as it is oddly surreal. The land seems to stretch far and wide and it meets the tip of the ocean, which affords the film many shots of rampant skinny-dipping – this made me think that Denis was trying to trump Derek Jarman by one-upping his Sebastiane (1976).

Wet bodies don’t seem to interest her as much as hard bodies though. In training – usually on the seared deserts – the men hurriedly and quietly go about their procedures. The camera gets close enough to observe all the minute intricacies of their actions, but never opens up specific, logical avenues for us to see it extended beyond preordained and coded sexualised activity. It’s all pent up emotion, with little, or no, outlet. All this endless exercise is the calm before the storm, so to speak. It’s amazing how captivating it can be; there’s rarely a moment of boredom at any point. The languid rhythm of the editing mimics the men’s bodily movements. We’re lulled into a daze of oddly calm gestures, which are all the more strange because of the submerged levels of aggression they contain. These men respect one another – as comrades do – but there’s no obvious closeness. Denis does all the real bonding here, while we watch with inquisitive eyes.

And in contrast to all the gently swaying bodies in states of exertion, Lavant’s odd, spasmodic and downright fucked up dancing to Coronia’s 'The Rhythm of the Night' in the very final scene of the film is both hilariously baffling and strangely poignant all in one. In this last moment of acting out, both Denis and her main character do eventually achieve some kind of emotional release.