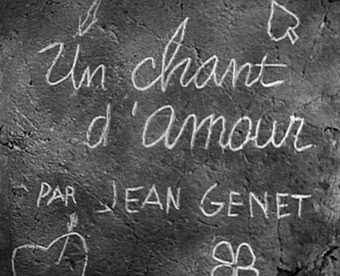 I finally caught up with Jean Genet’s only film as director, Un Chant d’amour (1950), within the past year, and it was only as it started that I realised it contained no sound; it was very much a silent film. For some reason I always assumed - in noting the literal translation of the title, A Song of Love - it might feature at least a sprinkling of musical accompaniment, at least. I don't know if my ignorance in not knowing much about the film had anything to do with it, but as soon as the film started the impact of Genet's soundless criminal world was quite a shock: the first prison guard had no footsteps; the swinging flowers outside the cell window made no whooshing sound... 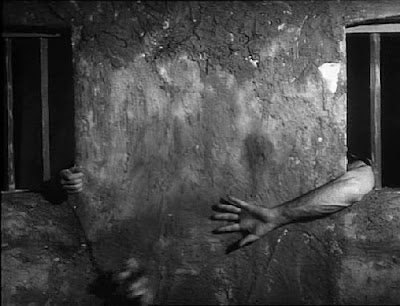 The film is full of splendid, close-fitting imagery – some of it stark; some of it consolatory – but the absence of sound is the most interesting thing about the film. After a while – through the visual-aural associations I missed via the actions carried out on screen – I found myself subconsciously adding sounds to match whatever was happening: I took on the role of the foley artist. The bizarre, solo, jerky dance one inmate performs (either for the prying warden? us? or simply himself?) was rhymeless. Just as the prisoner may have conjured up an internal song, I did the same. I was making the scene as moving, painful, transcendent or even as humourous as I wanted to. I found that the lack of either diegetic or non-diegetic sound often desexualised the action (chiefly the flirtations and foreplay between the prisoners). But, adversely, that lack also makes some moments more intimate, more sensual. A climbing visual fascination occurs, not only for the inmates on screen (visibility for them being hindered by cell walls), but also for the viewer (audibility for us being hindered by its very deficiency). On screen and off, we retreat to recalled images and sounds, respectively, as tools for arousal and/or identification.

The absence of sound during the frequent scenes of sex in the film eradicates one significant and sometimes embarrassing factor (for any person): all that panting and groaning and, er, general verbal appreciation, shall we say. It could be that these prisoners perhaps can’t or won’t make any sound during sexual acts (through fear of being discovered, general self-consciousness, or the desire to keep things ‘unspoken’). This idea is raised in the film’s absence of aural accompaniment. Without it, Genet’s moments of sexual intimacy come across as distanced and almost clinical, tidied up somehow, though never dulled or unpassionate. We inscribe onto the screen how we might feel; it presents us with the act and asks us what we do, how we’d act and what we sound like in similar situations. (The essence of the act of sex, gay or straight, being of course both relative and universal.) 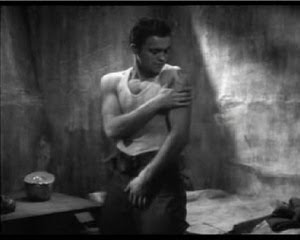 It’s clear that films like Todd Haynes' Poison (1991), Sean Mathias' Bent (1997) and, to some extent, Gus Van Sant's Mala Noche/Bad Night (1985) - as well as (although in a different vein) various Andy Warhol film experiments such as Blow Job (1963) – drew largely on the tonal sensibilities of Un Chant d'amour (particularly in the case of Haynes' film: the 'Homo' section directly references the film), but none captured its exact tone, whether outrightly intended or not. The Love Behind Bars theme may have been examined through others' filmmaking, but Genet’s crucial touch was to deliberately make it affecting through what he didn’t include: the nonexistent sound makes us focus on what’s not there; as a result the focus falls on the images more intently.

The film has often been labelled as visually poetic and dreamlike, and although some sequences have a particularly insular kind of surrealness about them, the general ocular cheerlessness of it doesn’t really inspire - or indeed require - too much overt romantic reference: the details in the very everyday-ness of its most intimate moments are beautifully conveyed with a lucid frankness and, in my view, there isn't call for overstatement here. This is not to devalue what Genet and his co-cinematographer Jacques Natteau acheived at all. The images are certainly distinctive: each scene is framed with immaculate attention to screen space, and the frequency of close-ups instil further intimacy within this world of confinement. But the real potency of the film, what lingers afterwards as a result of watching it in silence, occurs through what each individual viewer adds onto it – through whatever tune, noise, hum or whisper they think fits. We personalise it that way; the best stuff arises simply through the viewing. Did Genet require us to be unwitting interactive participants, by deliberately omitting a soundtrack? I don’t know. But the resulting effect makes his only directing effort a thoroughly reciprocal experience: the viewer, him- or herself, is the perfect complement to the visuals. 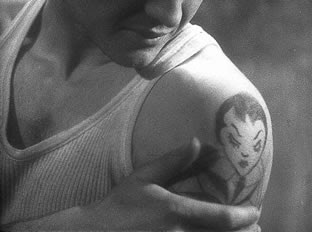 Maybe Genet had said and sung too much elsewhere, through his novels (tellingly, books obviously don't have soundtracks), or in his own confinement, to need to say anything with either dialogue or song here. Or maybe he just prefers his films pre-talkie. Who’s to say what Genet’s ultimate thematic or aesthetic intentions for the film were. But this isn’t essential to grasp its seductive qualities. What’s presented on screen can be absorbed intuitively. I took it in the manner I did at the time, and others do likewise. But the lack of voices and noises, the sounds of desire or submission, replaced simply with silence, is what’s so spellbinding about Un Chant d’amour. I could transpose anything I liked onto this mini-fable of grubby love. Needless to say, however good Simon Fisher Turner's or Gavin Bryar's scores for reduxed versions of it are, it's best left without one.
Posted by Craig Bloomfield at 18:56