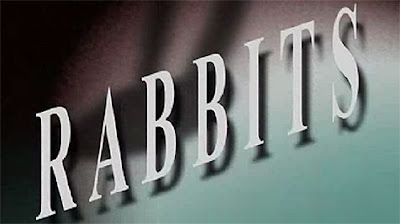 At forty-two minutes this short, web-only offering from David Lynch (found on his own website) is one of his straight up oddities, no question. Made after Mulholland Dr. (2001), alongside another experimental short, Darkened Room, and his crudely animated eight-part web series DumbLand (both 2002), it feels like a roughly thought-out sketch, a test for something bigger (it did ultimately get segmented and cleverly enfolded into his last feature Inland Empire (2006)). Lynch is reported to be constantly prolific between features, whether with short films, painting, photography or sculpture (Rabbits is certainly a stop-gap experiment). His signature themes continually reoccur throughout these side projects, expanding and building on his ongoing fascination with dark deeds and strange happenings. Rabbits fitfully, yet densely uses some of the ideas and imagery that has permeated his films from the start. Faulty lighting? Check. Fire? Check. Shadowed interiors? Check. People in bunny costumes doing the ironing? Ah, that’s a new one.

The film – actually a series of four-or-five-minute episodes strung together – is simplistic in set-up, yet relatively obscure in execution. Each segment opens with the same image: a barely-lit room containing a couch, a telephone on a table, an ironing board, two lamps and a doorway leading to… well, somewhere otherworldly for sure (although Inland Empire did eventually provide the answer). The film features only three characters: Suzie, Jane and Jack (Naomi Watts, Laura Elena Harring and Scott Coffey respectively – although not that we can tell, as the rabbit suits obscure their identities throughout).

Characters enter the room, approach each other and make blank, stilted comments to rapturous applause from an unseen audience. It has a sketch show/sitcom set-up, although there is no actual obvious comedy; the lines aren’t funny in the way that sitcom one-liners tend to be. I doubt we’re meant to get the humour, if it is indeed there to actually get, as it’s not really outwardly funny in any normal sense. It’s deliberately baffling - more of an innate manner for these rabbit people to communicate with each other and a way for the viewer to attempt to grasp some kind of narrative. It feels like dialogue from a performance art piece (Lynch’s 1990 filmed theatre piece Industrial Symphony #1 comes to mind) or a bad poetry reading. If it’s empty of meaning, then it feels deliberate, presented merely for us to connect the dots and take away its wispy gist perhaps? I’m sure he’s aware of how impenetrably barmy it all comes across, anyway. 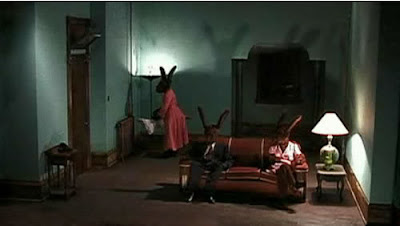 Still life With Rabbits (and ironing)

It adds up to very little in the way of coherence, but this doesn’t really matter initially. The last thing I’d want from Lynch when he’s wearing his playful hat – especially in a work this absurdly throwaway – is a narrative that fulfills logic or makes any kind of defined sense; with Lynch it’s thankfully always mood over meaning. He’s merely presenting a set-up, a tableau vivant, and letting his ideas seep out in whichever way he likes; using mise-en-scène to create an arena in which he can seemingly empty out the contents of his brain at the given moment of a take.

The one set-up is consistent throughout: the room is lit the same way and the camera is in an identical position each time the image fades in. Long periods where very little happens are frequent; it’s focus is the pause, pregnant with dread, waiting another monotone line reading as if delivered straight out of a daytime soap opera. This feels intentional and adds a further peculiarity to the already over-peculiar mood. All the time there are constant noises or random spurts of sound that have an instantly typical Lynch feel of otherworldly aural fear: it could be the distant hisses and thuds of some far-away factory; steam pumped out from gnarled machinery; or that fierce wind through the dark trees that Lynch loves so much. We don’t know what is going on outside of the room, and, by extention, outside of the film’s frame. What’s behind the (only) door to the left of the frame? We know, from the re-occurring footsteps echoing ominously that a man in a green suit figures somewhere in the mix, but who, and where, is he? And what’s with the twisted red rodent face that appears in the top corner of the room, gurgling some kind of warped and cryptic dialogue?

For whatever it is, and whatever Lynch might be saying with this, I liked what he was doing on the whole. As ever, he’s eschewing comprehension for the abstraction of imagery, and the hitting of the right phantasmagoric tone. There is a startling, albeit brief, moment when that door on the left slowly opens of its own accord; there is one of his daunting pauses then a cacophony of horrible sounds and lighting changes; then the door quickly slams shut. After thirty-odd minutes of feeling that something ungodly might be lurking there, the effect is terrifying. Here, Lynch is doing what he does best. He may be resting on his laurels slightly, punching just shy of his own weight, but it still works well enough – though nowhere near as effectively as it does in his features. (The effect that the chopped up Rabbits has, as expanded in the monumentally evocative Inland Empire, is sublime, and woven in with great emotional deftness).

Lynch is comfortably back in his red room.

Other than his ability to truly unnerve the viewer, the film is slightly underwhelming. Maybe it’s the episodic nature or the over-familiarity with his ideas, but something feels somewhat lacklustre about it. He is being wilfully obscure. He often is, but in his other, longer films the abstruseness is built up, extended and spread over a series of (not always necessarily sequentially ordered) narrative turns so that it finally comes to a terrible and often open-ended conclusion – where we’re left to ponder all its effects and implications as the credits roll (I’m thinking of Fred’s ride into infinite metamorphosis at the close of Lost Highway (1997) and Betty’s suicide, followed by the Blue Lady’s reverberating sign-off, ‘silencio’, in Mulholland Dr.)

Perhaps due to its limited, piecemeal set-up Rabbits largely just baffles and then simply ends, without much of an enduring impact. An enigmatic trace of atmosphere does remain, to some degree, by the time the rabbits have hopped off the screen. But it’s a minor, quickly evaporating trace compared to how all the nocturnal mysteries and exterior horrors take sublime flight and permeate all-day and all-night-long (and much longer still) in his film work. But in the sequences where mood is sustained with maximum efficiency, Rabbits intrigues simply and instinctively – not letting on about the terrors that lay wait on the other side of that door.
Posted by Craig Bloomfield at 16:03