This week my "Take Three" column (every Sunday, three write-ups on three performances in a supporting/character actor's career) over at The Film Experience features Jérémie Renier. 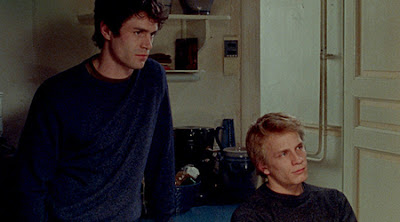 Yannick Renier (left) with this week's Take Three actor, Jérémie Renier (right) in Private Property/Nue propriété
Take One: Private Property/Nue propriété (2006) Joachim Lafosse’s beautifully-crafted French family drama Private Property, starred arthouse doyenne Isabelle Huppert alongside Renier and his brother Yannick (also an actor). They're just about getting on in a country house that non-identical twins Thierry (Jérémie) and François (Yannick) don’t want to sell, but Mater Dearest does; the live-away father/ex-husband backs the twins – and it’s his house. The drama is all about the to and fro of this looming possibility, the elephant smack bang in the front room and pregnant with the biggest pause imaginable. Lafosse curiously shapes his narrative with inharmonious tension between the three: it’s sometimes sexual, sometimes queasily thick, and most times unavoidable. Freud would’ve loved a visit with this Gallic clan...

Read the rest here
Posted by Craig Bloomfield at 10:45