This week my "Take Three" column (every Sunday, three write-ups on three performances in a supporting/character actor's career) over at The Film Experience features Shelley Duvall. 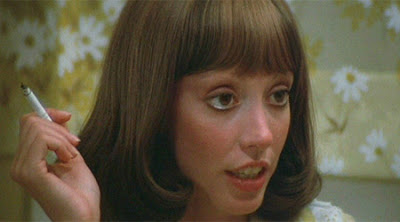 Take One: 3 Women (1977) There aren’t very many characters like Millie Lammoreaux in the movies. Watching Robert Altman’s 1977 masterpiece 3 Women you can see why. Essentially there are two reasons: she’s a hard sell, commercially speaking, and Duvall has played her perfectly well here already; there’s no need for an imitation version from anyone else. Duvall made Millie so singularly and categorically her own. It’s her signature performance; the centrepiece on her C.V. As per the title, she shares the film with two other women: Sissy Spacek, as her new roommate and care-home co-worker Pinky Rose, and Janice Rule as Willie Hart, a local (to Millie’s apartment complex, the Purple Sage, where much of the film takes place) artist – the one who paints the mysterious swimming pool mural which seems so significant to these 3 Women, and (metaphorically?) permeates it with an uncommon atmosphere...

Read the rest here
Posted by Craig Bloomfield at 18:32