This week my "Take Three" column (every Sunday, three write-ups on three performances in a supporting/character actor's career) over at The Film Experience features Peter Sarsgaard in Garden State, Boys Don't Cry and Green Lantern. 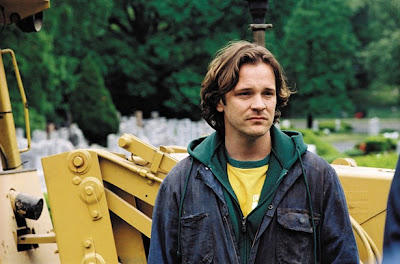 Take One: Garden State (2004) Including Garden State as a Take Three take meant two things: watching one of Sarsgaard’s very best supporting performances again and watching the actual film again. The charm of the former outweighed the task of the latter. Despite essentially disliking the film, Sarsgaard makes it worth seeing. You get no sad, woe-is-me moping from him, nor do you get “original” moments of screechy-unique arm waving. His character, Mark, a grave digger, comes from the ‘insta-best friend’ vault of movie characters, but it’s what Sarsgaard does with it that makes all the difference. He’s essentially present to take a face full of Braff’s woefulness. During an abysmal rainy shout-a-thon into a large pit, he's on gooseberry duty, forced to awkwardly stand around whilst Braff and Portman snog each other’s faces off. But Sarsgaard lingers with style...
Read the rest here
Posted by Craig Bloomfield at 06:53