Claws out for Catwoman

I recently revisited Catwoman (Pitof, 2004) for no real reason other than it sprang to mind amid all the casting shenanigans and mumur around Anne Hathaway getting the coveted role in The Dark Knight Rises. I wanted to see if it was as egregiously hyper-styled and as coherently wonky as I remembered. It was. So here I get five claws out for the film…

"Let's get drunk, that's gonna bring us closer. Don't I look like a Halle Berry poster." - Missy Misdemeanor Elliot
1. Catwoman’s narrative is gloriously ridiculous, but not very good. But of course. As only it can be in a film in which a person dresses as an animal to exact revenge on someone trying to conduct mass killing via the medium of face cream. Patience Phillips (Halle Berry) works as a designer in a company run by the wife and husband team Laurel and George Hedare (Sharon Stone, Lambert Wilson), who have created said cosmetic contraption. (Check the woe-are-the-perils-of-beauty angle: it’s so addictive that it causes the user's visage to disintegrate if they stop applying it.) This monumentally silly product is about to be released onto the market just as Patience stumbles upon their scheme; she is “killed” only to be resurrected as Catwoman, eager to wreak revenge on the perpetrators of her “human” demise. Her revival, by a hoard of cats that last appeared in an ‘80s Cure video, is thanks to wise and mystical cat-lady called Ophelia Powers (Frances Conroy). Frances, love, Ophelia Pain.

2. The film's main selling points are its many action sequences where Berry gets to show off her feline-tooled footwork. This aspect is addressed with fashionably high-stylized and frenetic direction. Although it doesn't ultimately add up to anything particularly thrilling or inspiring. Along with the misjudged editing, the constantly-in-motion camera gives the effect of glossing over the almost visibly gaping plot holes. If the camerawork took on a slinkier, more sophisticated approach after Phillips' transition to Catwoman (one that, say, mimicked the character's agile traits) the action scenes may have proved to be more entertaining, rather than just confusingly idiotic and topped off with Berry mouthing the word Meow. (When she utters this, either before or after confronting her foes, it’s meant to be ironically threatening and/or alluring, but it merely sounds as if she’s reading it off a Whiskas label.) Needless to say, better direction would’ve enhanced Phillips' progression from dowdy demeanor to avenging creature in a smoother, more effective manner. 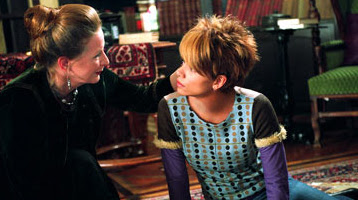 Ophelia Powers is impatiently feeling Patience's powers. But not her fashion sense.
3. Lessons go unlearned from time to time. This is a lighter, tamer attempt at bringing Catwoman to life in her own stand-alone film. Although it discards any previous ties with the (then, as in pre-Nolan) existing Batman franchise, it could at least have done with taking a bit of inspiration from some of the more inventive aspects of the first two Tim Burton entries. (Catwoman does share a producer with Burton's films, Denise Di Novi, although her input appears scarce.) Batman (1989) and Batman Returns (1992) built up a darker edge to the Bat-universe. It mixed dense shadows into the fairy-tale frivolity that the laughably wonky third and fourth films failed to maintain. Twelve years after, what we got was something more akin to the two Joel Schumacher installments, Batman Forever (1995) and Batman and Robin (1997); both movies of neon set-design suicide and royally fudged dialogue.

4. Despite Hall Berry being a stunningly felid and athletic presence, the part doesn’t entirely work. Berry’s take on Catwoman vastly differs from Michelle Pfeiffer’s in Batman Returns – the closest measuring stick, both chronologically and thematically. I’m glad, to some extent, as a direct retread of what went before wouldn't have been wise. (Pfeiffer had her own take on the role.) But Berry slices her ham thick here. It is neither an Eartha Kitt/Lee Meriwether/Julie Newmar exercise in gleeful theatrics nor an alternative attempt at psychological or tongue-in-cheek masochism. Bizarrely, it’s oddly erratic (Patience has no such trait that defines her name – she bolts into situations in an unfeasibly messy, stressed manner) and cautiously hemmed-in (can’t be too kinky, now!) at the same time. It falls short by a long way and results in a character unwisely taking it all too seriously, yet all the time having no real conviction to back it up. 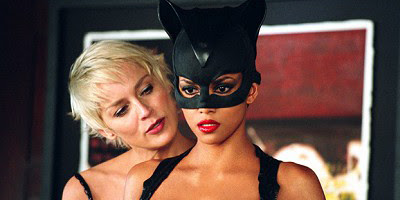 Halle can't believe just how stony Sharon's being that she can't even look at her.
A side note, relating to casting: some of the themes of the film deal with the ideas of ageing and female empowerment. At one point Stone's character bemoans the fact that she had to stand down as the poster girl for her cosmetics company because she has turned 40. (Stone herself has made similar comments about the lack of decent film roles for actresses over a certain age.) Although this seems a topical reference point, the film doesn't expand on the idea. The chance to make a valid point about Hollywood's – or indeed any beauty-obsessed industry – fixation on youth and fixed-age looks isn’t taken.

5. It would be interesting to see how the film would have turned out with a prominent female presence behind the camera. A director like Kathryn Bigelow might have properly explored the limits of action spectacle waiting to bust out from under the Catwoman premise. But whether she would ever go for a comic-book movie is open to question. (She has an Oscar now, so it's unlikely.) To think that it could have achieved what the Batman films delivered under Tim Burton’s guidance (darker, more adult explorations of dualities and retribution), but ultimately doesn’t, is a shame. Instead, it approaches the hectic sloppiness of Schumacher’s double Gotham foul-up. But perhaps it wasn't the film's intention from the outset to mimic or mirror either Burton or Schumacher’s efforts at all. It would be silly to berate the film for not trying to feel like its own entity, especially considering that it plainly does what it set out to do: be a frothy, colourful take on a superhero film. It's just that it misses the opportunity to be truly different, to do something really interesting with a complex character. The cat may have got the (face) cream, but the audience is left with sour milk.
Posted by Craig Bloomfield at 22:02