This week my "Take Three" column (every Sunday, three write-ups on three performances in a supporting/character actor's career) over at The Film Experience features Brad Dourif in a variety of roles including Wise Blood, One Flew Over the Cuckoo's Nest and the Child's Play films.

*Note this is the final Take Three in this third series (apart from a S3 wrap-up entry next week). For now, it's done. But perhaps maybe one day I'll resurrect it... maybe even in a different form* 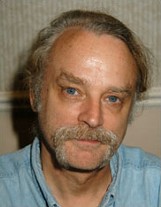 The sign of a great character actor can often be seen in the directors they work with. Of course not all will be universally lauded names (character actors don’t get to pick and choose like A-list stars), but when they repeatedly work with filmmakers of high regard you know there’s something special about them. Dourif has worked with some of the most visionary and celebrated directors working. The likes of Werner Herzog and David Lynch, whose off-kilter approach perfectly chimes with Dourif’s, have cast him time and again...

Read the rest here
Posted by Craig Bloomfield at 18:57