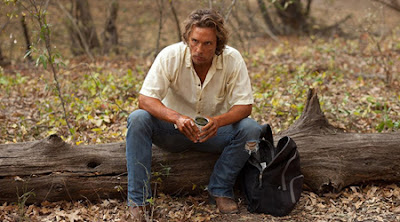 It’s clear from the first images of Mud that we’re in for a heady swill of hardened Southern not-quite-gothic drama and coming of age tale. Arkansas tides ebb, trees sway, youths venture out on rickety row boats; everything is lightly unsettled, a gritty life lesson is imminent. There’s an apparent literary influence in Mud — more pronounced than in either of director Jeff Nichols’ prior features Shotgun Stories or Take Shelter — and a helping of emotive substance that goes into well-grounded melodrama, albeit one with the potential for ill deeds, nicely alluded to in both Adam Stone’s sombre photography and David Wingo’s spare score.

It feels very much like a Flannery O’Connor short story set a few states over and peopled with the descendants of Mark Twain characters. It’s a Boys' Own adventure story loosely invaded by the spirit of Robert Mitchum’s Harry Powell. Mud’s aura may not chime in strict geographic accordance with either Twain or O’Connor — there are minor hints toward Carson McCullers and William Faulkner too — but thematically it contemporarily evokes a humid and almost solitary tone familiar to those writers’ worlds. It acknowledges the grand, grimy sweep of renowned Southern writing, doffs its hat, nods and goes about its business with a knowing charm. 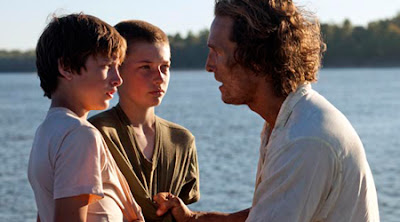 What it’s about is: two teenage boys Ellis and Neckbone (Tye Sheridan, from The Tree of Life, and newcomer Jacob Lofland, both very good), who spend their days lolling around a down-at-heel backwater town, chance upon a friendly yet mysterious stranger, actually a fugitive criminal called Mud (Matthew McConaughey, building well on a recent gold streak), on a nearby depopulated island whilst scoping out a recently stranded boat – which now functions as both tree-house home and possible getaway vehicle for Mud. McConaughey’s earthy interloper enlists the boys into helping him repair the boat and to assist in his rekindling of past love Juniper (Reese Witherspoon, nailing broken dejection with ease). There’s a gangster element on the horizon, parental problems and the usual pains of growing up. The autumn days don’t exactly get easier.

Mud is an engaging yet drawn-out film. It ekes out its slim plot nearly to the point of labour but allows for some poignantly choice moments of introspection. A slow sense of impending dread, of sure incoming calamity, infuses everything with an ominous pull of the most laid back variety: bad things will happen, but there's a long wait before you get there. (At 130 minutes Mud wades along with a casual swagger.) As hardscrabble and heavy-hearted as it is, instances of light humour play well: Michael Shannon’s (as Neckbone’s slobbish lothario uncle) retooling of his diver’s helmet with better search lights that makes him look like a discount store Iron Man; the running gag of McConaughey seemingly only scoffing on one particular brand of stolen tinned beans. 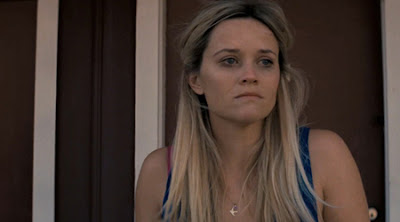 Mud is mostly men, most of the time. The three key female characters aren’t as expansively drawn as the menfolk. Witherspoon’s Juniper is the trailer trash Eve to McConaughey’s anti-heroic Adam (snake imagery is rife, too), but her scenes are essentially limited to being saved from a beating, some motel room moping and a light shop for ‘bits’ at the local Piggly Wiggly. Sarah Paulson makes a soft impression as Ellis’s mother, though isn’t afforded quite the screen time or characterisation allotted to Ellis’ father, played by Ray McKinnon, and she’s given short shrift in the final stretch where McKinnon isn’t. And Bonnie Sturdivant as local girl May Pearl courts Ellis’ attention and then quickly besotted by another lad, in an unfortunate bit of prescriptive scripting that suggests women shouldn’t perhaps always be trusted (Mud seems to counteract this, but only late on in the film and all too briefly.)

It’s a shame that Nichols’ female characters don’t receive the same attention as the male characters, as some balance would’ve certainly expanded the central theme of how boys become men and how men become fathers into something with both socially and emotionally complex layers. Women are primarily the cause of sadness and disruption here. In Elia Kazan’s Wild River (1960) Montgomery Clift didn’t satisfactorily solve his moral quandary without the complicated affection and existence of Lee Remick. And the time Stacy Keach spent meaningfully cosying up to Susan Tyrell in John Huston’s Fat City (1972), only to be separated later on, could be detected sadly slouched across his face in the final shot. Nichols sidelines the crucial impact of women even when they’re essentially the film's motoring force. 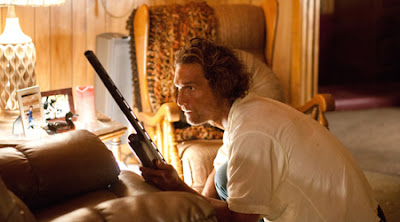 Nichols conjures a wistful tone with a near tangible sense of place. Being an Arkansas native he surely knows the habits and rhythms of the people and their ways of life. He supplies an authenticity, free of typical establishing shots and over-familiar music cues, to the way the story eases forward. A dirt-choked melancholy air permeates Mud; grime and regret are evoked easily and stand as signifying anchors. But the plot peters out roughly around two-thirds in: where events should build with fascination and then converge with accumulative resonance, they actually chug through a series of hasty scenarios, including one or two odd late resolutions that feel slightly shoehorned in as if Nichols is making deliberate moves into full mainstream territory. There’s a sliver of the supernatural to Mud that begged for expansion: when we first see McConaughey he literally emerges from out of nowhere; is he something “other” than a mere man? This tantalising aspect could’ve been further expanded in an enigmatic way.

Without revealing late key plot points, a stronger and more, well, untidy final stretch may have more fully complemented the power of its earlier convictions to show its teenaged protagonist that the path to adulthood is as strange as it is full of hope, yet still strewn with tough complications. But it is a strongly shot, acted and photographed film. Nichols is an extremely talented and estimable filmmaker who so far confidently mines his own highly atmospheric groove yet isn’t afraid to acknowledge influence as he does so. His camera tracks his characters with fond scrutiny and justified care. His everyday folk bleakly, quietly toiling through their often mundane, sometimes grand experiences have a broad, congenial appeal. They often come with an unwritten but observable backstory of the kind that good short Southern fiction dictates. Before you know it, you’re wrapped up in the lives of his lost people living their agreeably solemn lives.
Posted by Craig Bloomfield at 14:28