Films I saw in June 2013. The format is: film title (English lang. and/or original language where required -- occasionally a film's alternative title, too); director(s) and year; whether it's a rewatch; numerical grade out of 10 (all grading is subject to change, of course, and intended as merely a personal indicator/reminder). Titles in bold indicate that the film is, by and large, a 2013 UK first release or is eligible for year-end inclusion. Films are listed seen chronologically (as viewed) from bottom to top.

Midnight Son (Scott Leberecht/2001) 7
Nice to still see a fresh, fascinating take on the (kind of) vampire movie. Cramped, cold, stifling and with some queasy blood work. It fits with Nadja, Martin, The Addiction and Trouble Every Day in terms of tone and grue. Maybe not as great as those, but it is very good.

This Is the End (Evan Goldberg, Seth Rogen/2013) 5
It's brimful of confidence and is certainly sure of itself. A handful of good gags work. Not sure it's as funny as it thinks it is. *Wafts the air* Phew, a lotta gay panic up in here (though I guess the makers are all too aware). Kinda wish gags varied more. Craig Robinson (dry), Jay Baruchel (daft), Michael Cera (drunk) and (one specific vocal gag from) James Franco were best in show. Pretty sure it was after a Ghostbusters vibe. However, it managed more of a cross between a Ghostbusters II and an Evolution vibe.

World War Z (Marc Forster/2013) 6
It aims big, but achieves a middling result. Auto-Pitt. Erratic dir. Set-pieces mostly thrill, but country leapfrogging is the (lazy) script — which makes for a generally deflating time between the intense moments (though it perhaps relies heavily on these instead of on characterisation). For a film with huge potential, it's disappointing that it's only decent enough, but what it gets right works pretty well cinematically. Pitt isn't really dynamic enough for sole lead duty. Other characters deserved elevation (Enos, Badge Dale, Mokoena) for more variety. If I'm honest I got a bit bored with the book after a spell. It had erratic highs/lows, was diverting and had occasional 'ooh' moments. Both work ok; neither reach spectacular heights.

Berberian Sound Studio (Peter Strickland/2012) 4
Sharp surface style, but that's it. Plot empty, dull. It's all mysterious posing with very little to say. Disappointing (on first watch, anyway). For a film about sound, its use/design was typically good. Nice photography added mood. Yet all was in service of a dreary dread. Many films influenced by Lynch over last 25+ yrs, but some elements of Berberian were a bit too familiar (Inland Empire especially). Shame I didn't take to it as I loved Katalin Varga, to the tune of a #2 spot on my 2009 year-end list.

Supporting Characters (Daniel Schechter/2012) 5
Shows that too much Alex Karpovsky can be tiring; more Tarik Lowe would be a treat. Self-involved but has some charm. 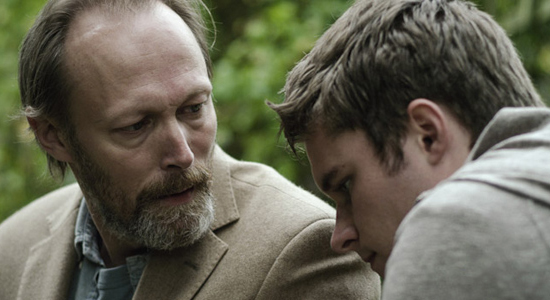 What Richard Did (Lenny Abrahamson/2012) 8
Cold and despairing, but with a keen regard for its characters. It's astute, demanding filmmaking. Great lead performance from Jack Reynor.

Branded (Jamie Bradshaw, Aleksandr Dulerayn/2012) 5
Russia. Burgers. Marketing. Cosmetic surgery. Cows. Max Von Sydow. I had no idea what's going on here, but I couldn't stop watching. It is an ungainly mess, and then some, but oddly watchable. There's occasionally technical skill, but no conceptual coherence. A real spilt pot of ideas. Branded scores high on the Unique + Different + WTF! scale. But even higher on the Clumsy + Bafflement + Pick an Thought, Will Ya! scale. With films like, say, Cloud Atlas and Holy Motors the oddness was enticing, urgent; with Branded (cf. Mr. Nobody) feels like an untidy MINDBINGE.

Being Flynn (Paul Weitz/2012) 7
Nicely paced with well-judged use of voiceover and structure. Characters feel, by and large, vital. It's far better than reviews say; shame it passed by unnoticed. Plot elements are reminiscent of the recent A Bag of Hammers and has a fair kinship to very good 1993 film The Saint of Fort Washington. Paul Dano is excellent; De Niro is good (better here than in his recent Oscar-nominated role in Silver Linings Playbook, too). Top cast all round: Julianne Moore, Lili Taylor, William Sadler, Dale Dickey, Olivia Thirlby, Wes Studi. The photography (by Declan Quinn) is one of its strengths. Clear, vivid lighting and a great use of muted palette. He's one of the best DPs working.

Flypaper (Rob Minkoff/2011) 5
Tonal wobbles and a script dotted with gay panic gags (yawn) aside, it's a breezy enough Agatha Christie-riffing bank heist yarn. Good cast. The script was written by the writers behind The Hangover films, so that explains the lame gags then. Best thing about Flypaper: nice to see Ashley Judd and Patrick Dempsey as leads. Both often very good with comedy; both deserve better material.

To Live and Die in L.A. (rewatch — William Friedkin/1985) 9
Red spells danger. Unsparing with a sulphorous weight. Point-blank editing, expert action. One of my favourite Friedkins. To Live and Die in L.A. was the second ever VHS I saw. It's still a great, hard, awkward, thrilling film. Late shock scene remains harsh. William L. Petersen is fantastic; he's all swagger masking a sad demeanor — but pushy, ragged, visibly toughened by life. Read a comment on To Live and Die in L.A.: "It tried to be Manhunter, but it's essentially Michael Mann-lite." However, Manhunter was made a year after L.A. Manhunter filmed September 1985; L.A. filmed December 1984.

Man of Steel (Zack Snyder/2013) 7
Fluid, entertaining, does what a big loud blockbuster should. Required some humour, lightness here and there maybe, and clarity at times, but I admired the approach. I liked the Zod Squad, especially Urs... Faora-Ul. Shannon gave good shout  and snarl (and crap hair). Krypton insect-ships a design treat. Didn't see most of the bad stuff that others had moans about. What do folks expect from a gargantuan studio film? Face value: it was fine. It hit its big notes with some flair. It's not perfect, but I didn't go into it expecting sheer perfection, but it knew how to work momentum into a sense of event. "Big" sci-fi often gets heavily scrutinised these days. The reasons why are surely vast and various. I mostly enjoyed Cloud Atlas, Oblivion, Star Trek Into Darkness, Iron Man Three and now Man of Steel this year — all of which recieved a high level of scrutinous commentary. Whatever: "Release the World Engine!"

Oliver Sherman (Ryan Redford/2010) 5
Good lead role showcase for Garret Dillahunt, who's very good. Donal Logue is even better in a fine support role. Molly Parker's solid too. It required a bit of leeway with its rigid solemnity to allow the characters to flourish, but it's a decent enough post-war stress drama.

Soldier (Paul W. S. Anderson/1998) 6
Kurt alert! The plot is balls, but does make way for a ripe helping of ridiculous space action. Direction is clunky but rigged to thrill. Soldier's good for fans of: snake wrangling; Kurt Russell being low on words, high on biceps; scores that sound like Aliens; space soldiers.

Revolt (J. Sheybani/1986) 5
So tinny and ropey it should be sold at B&Q. It's hilarious. No one knows what's going on and there's a shoddy fistfight every two minutes. There's a synthesiser theme and a moustache in nearly every scene; when there's not, there's a tetchy villain and really shite dialogue. 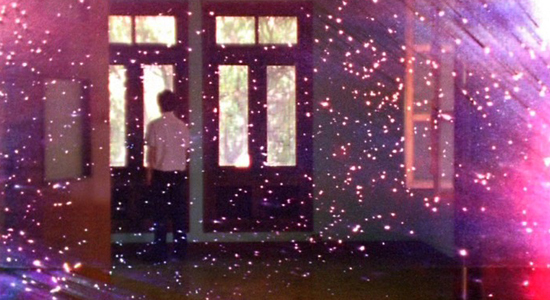 Mundane History / Jao nok krajok (Anocha Suwichakornpong/2009) 5
Has a quiet charm to start with, and is nicely directed, but its veer into vague, showy territory clouded its amiable tone.

Adventure in Manhattan (Edward Ludwig/1936) 5
Some good playing from Jean Arthur and Joel McCrea, but for a '30s screwball it's low on pep and snap. More one-liners!

After Earth (M. Night Shyamalan/2013) 4
It isn't a particularly great movie (some harebrained direction and plot decisions abound), but it's already down, why kick it some more? Reading the many (vicious) reviews has been akin to seeing one lot of people hold Shyamalan down whilst another lot deliver the kicks. What I liked: the part-old/part-new set design that tried something different; creature and gadget SFX; Peter Suschitzky's photography. However, Will Smith was tasked with playing the dullest movie character since Anna Kendrick in Pitch Perfect and Michael Fassbender in Shame. Everyone talked about an "Ursa" — "Ursa" this, "Ursa" that — so much that I kept expecting a scowling Sarah Douglas in a jumpsuit to pop up. Of MNS's films, I appreciated more than his previous five, so that says where I am overall with it. (Although some moments/images in all of them have been on the whole commendable.)

Behind the Candelabra (Steven Soderbergh/2013) 4
... lies age-old showbiz ugliness? A lot of gilded faff to say so little. All a bit basic, thin. Douglas and Damon are very good, however. Something I thought about: the 'drug haze' scenes in Killing Them Softly received moans of "cliché!", but I wonder if folks will apply this derision to the very same thing in Behind the Candelabra?

Upstream Color (Shane Carruth/2012) 8
If I'm honest, I wasn't as in love with Primer as many were. But... Upstream Color is splendidly, inexplicably mesmerising. Full of strange rhythms and linked existences, technically astute and seductive filmmaking. It synthesises many genres and forms something quite marvelous. Edited to the beat of perfection and, aptly, what colour! A film beautifully crafted with sensitive mystery; an intoxicating brain worm. Along with Shane Carruth's deft multi-tasking, the sound dept. deserve unbridled praise. Plus: Upstream Color worked the audio To. The. Hilt.

Natural Selection (Robbie Pickering/2011) 5
Tonal slippage and an overeager soundtrack mar the whole, but a handful of affecting scenes lift it. Nice lead perf and photography.

Chained (Jennifer Lynch/2012) 3
It took an already well-explored horror theme... and then explored it all over again. In depth. In tedious fashion. For 90 long minutes.

Salmon Fishing in the Yemen (Lasse Hallström/2011) 4
It proves you can make a film about anything. From a baffling premise a flimsy, innocuous piece of fluff emerges. Hallström's insipid direction doesn't dampen a lively perf from Kristen Scott Thomas; she's its chief joy. Generally nicely shot.

The Big Wedding (Justin Zackham/2013) 1
The best horror movie I've seen this year. It's fucking terrifying. Seriously, I felt sick, nauseous. I shook. Perspired. Was a quaking mess. I had to beg strangers to drag me out of the cinema. In the film someone's bathing their feet in a lake, and someone else jokingly says, "Careful, we have a shark problem here." Well,  if only. De Niro, Sarandon, Keaton, Williams, Heigl, Seyfried, Grace and Barnes — they all play beige assholes. No one is any good. No one. 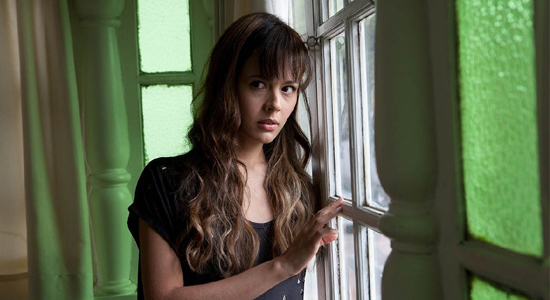 The Hidden Face / La cara oculta (Andrés Baiz/2011) 7
Definition of a moreish mystery. There's a key, a question and a ripple in the water... Best not to know any more than that. Original language title for The Hidden Face is 'La cara oculta' (the dark side); it also has another title which may as well be called Spoily-Oily-Oi, and is best left unknown. Just avoid all trailers and watch it; it's immense fun.

The Purge (James DeMonaco/2013) 5
Hey, that's a novel idea. Potential: yea big *spans arms out*. Execution: yea big *holds thumb and forefinger apart* Shaky polemic. At times an erratic mess, but not easy to write off, The Purge has apt points to make but underlines them in muddy fashion. File under: eh?

I'm the Angel of Death: Pusher III (Nicolas Winding Refn/2005) 5
Well, a film hasn't made me feel sick in a while. So there's that. Nausea + intrigue + bafflement. Plus. Pusher III best as character study: Milo is part unsavoury, part pitiable; compelling, yet only to a degree. Fits of GRINDNOISE! rends the mood.

To Live and Die in L.A.
Image of Relief
Soldier
Oliver Sherman
Mundane History
Posted by Craig Bloomfield at 21:36