July's poll question at The Film Experience was Which female figure in filmmaking most deserves an Honorary Oscar? My full ballot is below; I was given Catherine Deneuve to write a paragraph on. 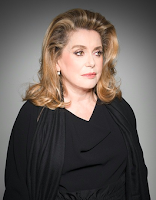 Catherine Deneuve is called the Doyenne of French Cinema for a reason. There is of course Leslie Caron, Jeanne Moreau, Fanny Ardent and Isabelles Huppert and Adjani. All exemplary. But Deneuve is Deneuve. Her work is her life is her work. She’s a solid gold bona fide star; an actress, a singer, an icon with a magnetic presence. She adds 100% more robust glamour and sultry skill to all her films — whether with Buñuel, Vadim, Demy or Truffaut or countless other notable filmmakers. Hey, not too many internationally-renowned actresses can say they sang with Joe Cocker, dated Clint Eastwood, speak four languages and design greetings cards. Pretty busy and eclectic, eh, particularly for someone with 100+ film appearances over 50+ years and her face on every key fashion magazine since, like, year dot. At 69 she looks as remarkable as ever. At 69 she performs as magnificently as ever. Look at Belle de Jour, Repulsion, Les Demoiselles de Rochefort, The Umbrellas of Cherbourg, Place Vendôme, Tristana and— after feeling the Denevue delirium — furrow your brow at her lack of an Oscar among her achievements. Then look at Un Flic, Hustle, The Hunger, The Last Metro, Ma saison préférée, Dancer in the Dark, 8 Women, Kings and Queen, Time Regained, Indochine and furrow your brow into infinity. Admittedly, she got a nomination for that last one. She won an Honorary Golden Palm from Cannes. At the very least she deserves an Honorary Oscar. Really, she deserves a couple.