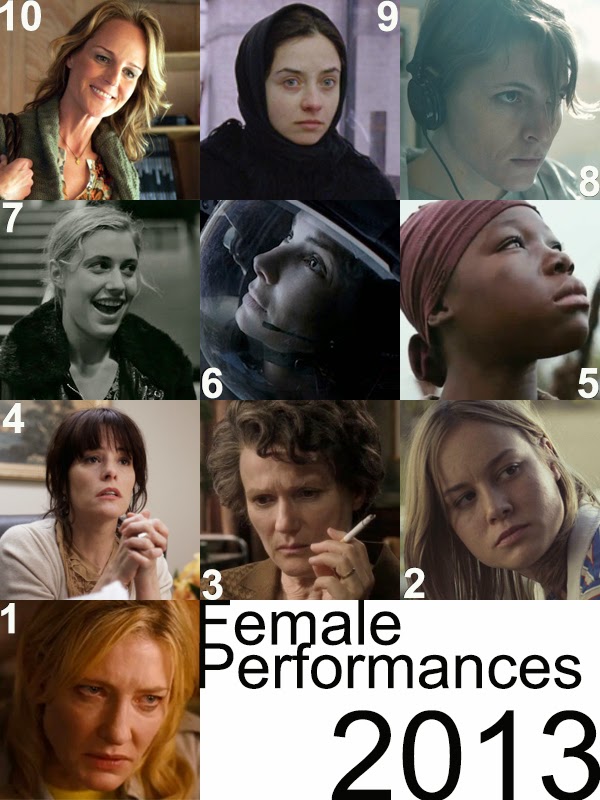 I saw The Sessions relatively late in the year, but I’m glad I squeezed it in as Helen Hunt (10) gave a great, subtle performance in it as a sex surrogate. Out of all last year’s Best Supporting Actress nominees she was easily the standout and deserved to win. She evinced the sensitivity within a deceptively complex yet affable and just plain decent character. Cosmina Stratan (9) was quietly devastating in Beyond the Hills. Watching her observe the troubling events in the film, take part in them, and be at the centre of them, was a huge part of the fascination of the film. The exact same goes for Amy Seimetz (8) in Upstream Color. She showed her grip on a lead role is just as secure as it is on support roles. She played Kris with delicacy, focus and fire. Greta Gerwig (7) was on this list last year for Damsels in Distress and she’s made it again for Frances Ha. Well, she does keep on being naturally captivating, full of goofy charm and wonderfully precise with her comic timing. Sandra Bullock (6) gets a place for giving her all to Gravity. She’s in almost every scene and carries the film effortlessly and near totally weightlessly. She shows every terrifying or euphoric experience as a complex range of emotions. It’s further proof that she can do drama just as well as she does comedy.

War Witch was a compelling film and, in the lead, Rachel Mwanza (5) gave a bold, heartbreaking performance. It’s truly her film and this young actress rises to the role with immense skill. She is leagues better here than many of the more seasoned actresses were in their films last year. More people deserved to see Price Check, chiefly for Parker Posey (4). Her near-perfect performance, in which she nails the division between quirky and awkward that many a MPDG type misses, is a sheer delight. She’s unlikeable yet endearing and shows a great amount of cheeriness and vulnerability at opportune moments. It was one of my favourite comedy perfromances of the year. I'd like to see a spin-off TV series fronted by Posey. Barbara Sukowa (3) as Hannah Arendt was, at various times throughout the film, intense, impassioned and as staunch as can be. Her lecture toward the end of the film is a masterclass in performance control (for the character and for Sukowa). Every piece of drama leads up to this point and Sukowa commands the screen without undue fuss. Amazing work.

Brie Larson (2) in Short Term 12 was a sheer revelation. I’d only seen her in small parts in a handful of films before, but this lead role should confirm her status as a seriously vital new talent. The subtlety and vigour with which she performs is enthralling. She hits each beat, each moment with a rare kind of emotion. I believed, and believed in, her character. A great acting achievement. Ultimately, though, no one was quite as good as Cate Blanchett (1) this year. In Blue Jasmine she stood out as giving the very best female performance of 2013. The cracks in Jasmine's glacial composure, the thread of despair that unwinds more and more as the film goes on (as her life gradually spirals into a personal oblivion), and the balance between spikiness and fragility that she manages with utter ease — Blanchett was commanding, assured, perfect. For proof, just watch her closely when she delivers the line: “Anxiety, nightmares and a nervous breakdown — there's only so many traumas a person can withstand until they take to the streets and start screaming.” It's acting that thrills.