Films I saw in January 2014. The format is: film title (English lang. and/or original language where required — occasionally a film's alternative title, too); director(s) and year; whether it's a rewatch; numerical grade out of 10 (all grading is subject to change, of course, and intended as merely a personal indicator/reminder). Titles in bold indicate that the film is, by and large, a 2014 UK first release or is eligible for year-end inclusion. Films are listed as seen chronologically, viewed from bottom to top.

I, Frankenstein (Stuart Beattie/2013) 4
It's hilarious. Not that it was meant to be. It should've been an intentional comedy, as the gag potential was overflowing. It just took itself far too seriously. It could've been a witty treat as in, say, Buffy or Angel, but it went for strained importance. No idea why a miscast Aaron Eckhart affected Bale's Batman voice. Bill Nighy gave one of his three performances.

Dead of Night (Alberto Cavalcanti, Charles Crichton, Basil Dearden, Robert Hamer/1945) 7
The polite Britishness of it, the (then) novel concept, the intense creepiness at the edges... until the creepy fully emerges. It's great that a film from 1945 still has the power to be truly scary — i.e. when, near the end, Hugo Fitch stands up and walks. Brrr. Some films' ability to scare can diminish over time, and with imitation, but some fully retain a lasting power. Dead of Night works wonders.

Kill Your Darlings (John Krokidas/2012) 7
Aptly wired, skittish. Story grips, though loosely. But emotive music and performances stand out: Radcliffe and DeHaan are both very good.

Jack Ryan: Shadow Recruit (Kenneth Branagh/2013) 4
Junior Bond. It's tidy, serviceable, formless. I was whelmed with averageness. I've forgotten most of it already.

Big Ass Spider! (Mike Mendez/2013) 5
Exactly what you think it is... then a bit more fun. More Infestation than Eight-Legged Freaks. Thankfully. What's with the limited Lin Shaye, though? 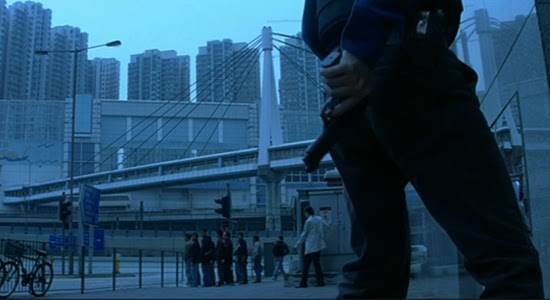 I'll Always Know What You Did last Summer (Sylvain White/2006) 4
Cheap and belated. "He" knows what they did last summer, but I very much doubt he gives a shit.

Inside Llewyn Davis (Joel Coen, Ethan Coen/2013) 8
It's a great film to have around, to be in the immediate vicinity of, to call on for a slice of quality sound and vision. Perhaps one of their best?

Center Jenny (Ryan Trecartin/2013) 8
Creates a horror show from trash elements and invented moments. Imagine the imagery of the nine imaginary hookers from Inland Empire + the Jersey Shore gang + every John Waters heroine all hastily edited in a blender and oured into a film frame. Trecartin makes Gregg Araki look like a nun. It's all elegant degeneration, weaponised ear-muffs and nano-magic.

Blind Chance (Krzysztof Kieślowski/1981) 6
KK questions fate in elusive yet assured fashion, but maybe it was done better via the Three Colours trilogy. A Mesmerising performance from Bogusław Linda.

The Wolf of Wall Street (Martin Scorsese/2013) 7
Drool. Ludes. Ass candle. OTT speeches. Leo up to 11. Reiner phone accent. Benihana. Sick world satire. Badfellas.
(It's the second film I've seen this year so far, after 12 Years a Slave, in which all the performances are remarkable. It's great filmmaking. 100% solid. But I didn't feel much, despite an overall appreciation. It left me numb. But maybe that's enough, a good, good thing.)

The Missing Picture (Rithy Panh/2013) 7
A creative reply to past horror. The model/stock approach gives it an emotive, powerful heft. Film used as sly combat. 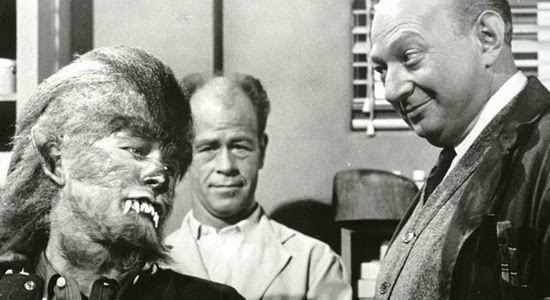 How to Make a Monster

How to Make a Monster (Herbert L. Strock/1958) 5
Plenty of fun for its slim duration, but a bit rushed, a quickie. It has a great premise, though. Worth seeing. It's decent, not great, but ideal for a redo as there's so much potential. If I had the money and the rights, I would love to remake it.

I'm So Excited! (Pedro Almodóvar/2013) 3
I'm surprised I made it to the end. Visually drab, tonally awry. Barely a laugh in it. Pedro's flat-farced self-imitation.

Fast Five (Justin Lin/2011) 5
Even the occasional subtitle zips fast across the screen. Vin Diesel's voice is so deep and low through my speakers that when he spoke it measured 9.5 on the Richter scale. Although I haven't seen Fasts 1-4 or 6 (with or without the Furious and/or other words), this worked as a stand-alone film. Just about. There's almost as much carnage as Man of Steel. Basically, Vin D and The Rock compared penises for 2 hours. Then they sped up their penises. Then they swapped their penises. Then discarded their penises as scrap.

The Apparition (Todd Lincoln/2012) 6
Follows the laws of cheap horror fare to a T. But some inspired ideas/images dotted throughout add a dash more to it. Enjoyable.

Last Vegas (Jon Turteltaub/2013) 5
Had a fun watching it; some hearty chuckles to be found. Freeman and Steenburgen were both good. There's something charming,and inclusive here — take that, The Hangovers!

Nobody's Daughter Haewon (Hong Sang-soo/2013) 4
Seeing the characters veer from charming to interminably dreary was a huge shame. Same goes for the film itself. Sadly, a big old Meh.

The Kings of Summer (Jordan Vogt-Roberts/2013) 7
An absolute delight. Charming and funny in almost every way.

The Railway Man (Jonathan Teplitzsky/2013) 5
Dull, painfully worthy. Firth and Kidman give go-through-the-motions bland performances. Often prettily framed, but overall very inert. The opposite of Saving Mr. Banks is true here: the flashbacks are better then the present-day scenes. Irvine and co. were very good. Something about the way the plot inveigles viewers into a certain reaction, then to oddly change its stance, was a bit off. It's hard to say more without spoiling narrative developments, but a lot of its plot turns seemed shaky, awkward and baffling. Also: exactly how much was true? 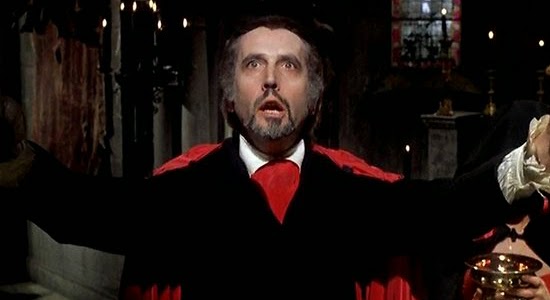 Lust for a Vampire

Lust for a Vampire (Jimmy Sangster/1971) 4
Not the best Hammer. A bit too on the Mills & Boon side. Could've done with being Jean Rollin-ised. Nifty castle though.

The Sessions (Ben lewin/2012) 7
Thoughtfully focused on good folks doing good things. Director Lewin has a fuss-free visual approach. Hawkes and Hunt are both riveting and restrained. Anne Hathaway won an Oscar for her close-up sing-crying in Les Miserables last year... it really should've gone to Hunt for this. She wasn't just leagues better than Hathaway though, she topped Jackie Weaver, Amy Adams and Sally Field too.

12 Years a Slave (Steve McQueen/2013) 7
A study in suffering. Framed like a boss with impeccable acting from all (though Ejiofor rightly shines high). A fine work.

Man on Fire (Tony Scott/2004) 3
Yikes, it's awful. Crass, portentous, full of overwrought and unearned sentiment. Everything is FUCK YEAH! WREAK ALL REVENGE!! It  has the same showy, jittered aesthetic that made Domino a cack experience. Denzel's dull performance keeps it flat and the script's plain naff. An all-round tedious, dispiriting film. Though, the photography (by Paul Cameron, who knows how to make action scenes work) was first rate.

The Adventures of Sherlock Holmes (Alfred L. Werker/1939) 6
Some high grade Nigel Bruce here. Rathbone's stellar too. Nice early Lupino role. Music adds an eerie quality. The shadowy, fog-shrouded London streets/sets are key in how evocative it is; so much atmosphere aroused simply.

Open Five (Kentucker Audley/2010) 2
The precious/tenuous/casual just-idly-hanging-out Mumblecore relationship drama is tired. This has very close to nothing to say.

Paranormal Activity: The Marked Ones (Christopher Landon/2013) 5
It was more of (exactly) the same, but, er, had 100% more 'Marked Ones' involved. Whoever the hell they were. That's not to say there weren't some fun bits. Though it wasn't especially scary like Paranormal Activity 3, which is still the best of the bunch by a long shot.

Hannah Arendt (Margarethe von Trotta/2012) 7
How refreshing to see a film about thinking, and that isn't dry or pretentious or laboured. It's fronted by a cracking, committed performance from Barbara Sukowa.

The Lone Ranger (Gore Verbinski/2013) 8 rewatch
Like it every bit as much as I did at the cinema. Ballsy fun. Action staged and directed with marvelous control and flair. 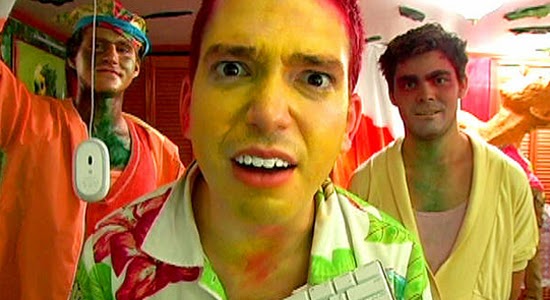 Mekong Hotel (Apichatpong Weerasethakul/2012) 8
A place of guests and ghosts. A film of loose ideas. An experimental sketch. A small thing of beauty. Above all: amazing images.

American Hustle (David O. Russell/2013) 5
Plot's a tricksy trifle, but the performances drive it in entertaining fashion. Direction isn't perhaps not David O. Russell's best, but it's all sprightly fun. The gals were best in show. Adams: great, one of her best performances. J-Law: all wrecked mania and cheek; a brilliant risky treat. Nice to see Bale in a (kinda) comedic role. He was good, as ever, but all I could hear was I Am Acting when he was onscreen.