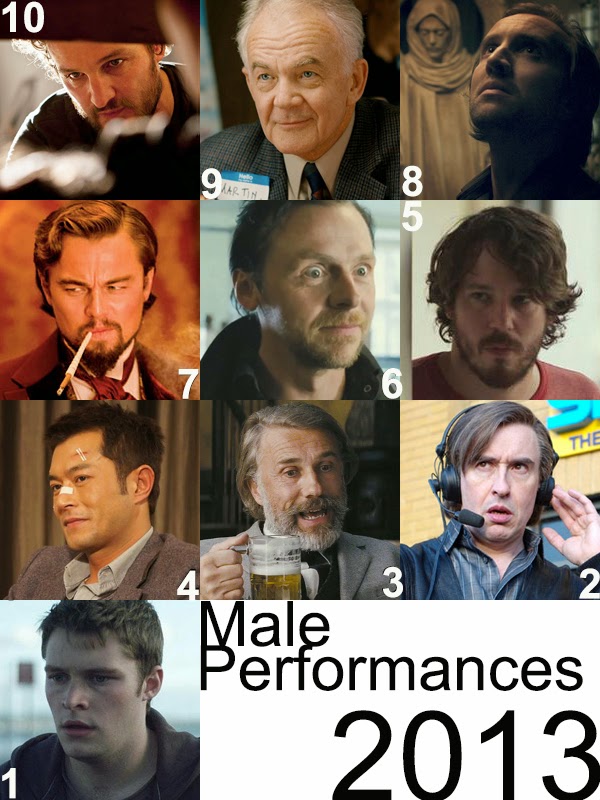 Zero Dark Thirty was a bold film with many memorable aspects, but the one that stood out most for me at the end of the year was Jason Clarke (10) in a support role. He’s been building up quite a CV of great parts over the last few years and here he made an indelible impact as someone with perhaps a unique perspective on war torture. His part was brief, but he’s simply riveting. Paul Eenhoorn (9) gave an affable performance in low-key drama This Is Martin Bonner, and was quietly compelling as a man open to the needs of others before his own. He underplayed the role brilliantly and portrayed an example of a sheer unabashed decent guy on screen — something that's always worth investing in. Aaron Poole (8) did some fine solo work in the effectively creepy haunted house movie The Last Will and Testament of Rosalind Leigh. As the, by and large, sole cast member he carried the film. He had to intricately show every instance of fearful terror that the script dictated and he conveyed the isolation with casual skill. Leonardo DiCaprio (7) seems to have entered a more fun, entertaining phase of his career with a film like Django Unchained (something he's brilliantly expanding upon with The Wolf of Wall Street). After a raft of weighty roles, his turn as a despicable ranch owner was a thing to relish. His barely contained maniacal glee and clammy giddiness in the film added some newfound freshness to his acting.

A veteran of entertaining roles, Simon Pegg (6) brought the same energy and pin-sharp comic timing to The World’s End that he brought to Shaun of the Dead and Hot Fuzz. But he also allowed the film a sincere and wrenching pathos too. I think it's the best he's been in this loose comic trilogy. John Gallagher Jr. (5) was as good in Short Term 12 as his more (rightfully) lauded co-star Brie Larson. His role as a care worker for troubled teens is beautifully defined and played with just the right level of pluck and grounded thoughtfulness. His character doesn’t significantly alter his path or transform in the way Larson’s does, but that’s part of the beauty of his performance — the character needed to be the hard-wearing yet amenable sidekick to balance what Larson and the other actors were doing. It’s an unassuming role to be cherished. Drug War was a trememndous film for a multitude of reasons, and Louis Koo (4) was chief among them. He played a tricky role, one buoyed with a range of complex decisions and actions that were required to be carried out in just the right manner, with immense ease. As is always the way with Koo. His work with Johnnie To is always essential. Like DiCaprio, Christoph Waltz (3) brought the fun to Django Unchained. His second Oscar under Tarantino’s direction was well earned, maybe even more so than his first. After ten minutes on screen his place on this list was guaranteed; his deft, joyful and endearingly eccentric performance made the film for me.

Perhaps due to the fact that Steve Coogan (2) has played Alan Partridge for many years, and obviously knows the role inside out, meant that it could be seen as an easy, unchallenging performance for him to give. Maybe so, but it doesn’t change the fact he’s nigh-on perfect in Alan Partridge: Alpha Papa. It’s a good thing it’s effortless as it makes the acting here richer, entirely confident and comically honed, spot on. He’s terrific with both the bigger, broader laughs and the smaller, more intricate moments. Partridge may not be clever, but Coogan certainly is. Jack Reynor (1) was exemplary in What Richard Did. He’s a relative newcomer, but on the evidence here he's fast developing the professional ability of a seasoned pro. His role — at least initially — is very straightforward. But as soon as we discover what Richard indeed did, and how, as the titular character, Reynor navigates his way through, around and deep down into the particularly desperate circumstances, his performance reaches great heights. Reynor conveys a great deal about Richard best through moments of contemplation and silence; we can see what he’s thinking, how his situation is eating him up and how the toll is affecting him without much need for dialogue. But he’s equally deft at the, at times confrontational, verbal expressiveness required too. It’s a fierce, layered and fantastic performance from an exciting new talent.