Road, Sweet Road: The Heart Is Deceitful Above All Things (Asia Argento/2004) 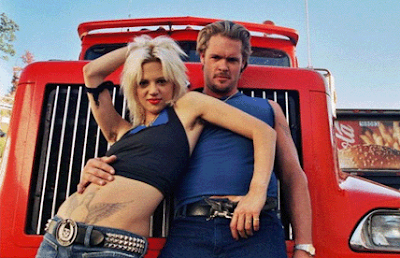 Having read the novel by JT LeRoy some time ago, I was intrigued to see what kind of film Asia Argento had turned The Heart Is Deceitful Above All Things into. The film didn't reach a cinema near me on its release (although it did receive a UK theatrical release, instead of going straight to DVD - a surprise considering the near all-out bad notices it received elsewhere). But I eventually managed to get hold of a copy and it actually isn't the awful mess I was lead to believe. Far from it. It isn't a particularly great film by any stretch, but it does contain many very inspired moments.

Argento was an interesting choice to make the film. She clearly has some kind of affinity with the short stories' subject matter; her treatment of it leans more on the open-handed side, even if the outcome feels slightly apathetic at times. LeRoy's characters somehow personify the idea of indifference. They live for themselves and often feed off others without much care for the repercussions, as the solitary, archaic environments they dwell in don’t really inspire reciprocal connections.

The fragmented and listless way he pens his grim fables more around his character's behaviour patterns than constructing them around the detailed background of their lives is surely harder to flesh out on screen. Conveying the kind of luckless selfishness demonstrated by the characters in the book must be tricky to get a firm handle on. On the whole the cast pull it off, Argento especially. The bite-size vignettes of the book are here threaded together to form a loose narrative, so that the direct and concise parts of the story are now smoothed out creating an extended and ramshackle whole. It didn't really matter too much though, as this approach worked to the characters’ benefit; it may initially appear like a mis-step, but it’s ultimately in complete accordance with the style of LeRoy's prose.

In the pivotal role of Jeremiah’s mother, Sarah, Argento dangles plenty of rope to hang herself with, and gives as gritty as she can muster. She made Sarah intriguingly creepy in the same way that, say, road kill is. That's not a discredit to Argento’s acting abilities at all (I’m one a handful of people who thinks she can actually act), but it's a car-wreck performance, full of affected lip biting and furious glares, but she treads the line between trashy and defeated well. If, say, Courtney Love had taken the role it would have come across as a whole lot more eye-rollingly obvious. The line-up of cameo performances, including cultish supporting actors (John Robinson, Jeremy Sisto, Ornella Muti, Kip Pardue) and familiar, often controversial celebrity names (Winona Ryder, Marilyn Manson, Peter Fonda) fit snugly into the scheme of events nicely, too. 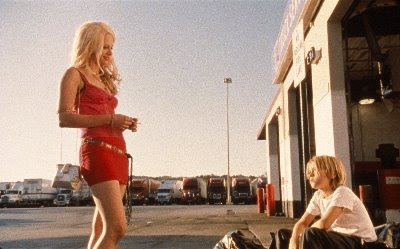 The photography - by sometime-Gus Van Sant collaborator Eric Alan Edwards (My Own Private Idaho (1991), To Die For (1995), Even Cowgirls Get the Blues (1993)) - is excellent at times. Some scenes seem intentionally underlit, especially those depicting the more seedier interiors of Jeremiah's upbringing: close-up shots of Day-Glo toys sit next to dank wallpapers; and truck cabs are, fittingly, made to look more homely than the austere hallways of Sarah's Christian father's house. It’s in aspects like this that Argento visually replicates the grimy descriptive tone of the book accurately. Certain scenes give way to flights of surreal fancy, too; red animatronic birds spew feathers over Jeremiah in times of despair, and a series of anonymous male faces flicker past the camera at one point. This breaks up the generally flat visual sheen, but also nudges the film close to looking like an arty magazine spread; if you pressed pause at any stage of the film, it would almost be like hovering over a page from a particularly drug-chic-heavy copy of 'Dazed & Confused'. Put it next to something more openly welfarist like, I don’t know, a Diane Arbus or Nan Goldin photograph maybe, and the film’s tone might lose a bit of its substance. As a sisterly companion piece to something like Gummo (1997) it feels about right.

One thing that struck me as a bit unnecessarily precious was Argento's reluctance to display her body. Not that she should, of course, and it's not a major gripe as such, as it may not have added much if she did, but it seemed integral for Sarah to be as provocative as possible, and seeing as Argento is renowned for the openness of her liberal attitudes, it was strange to see how coyly she avoided her own camera's roving eye in some instances. It was the one part of the film where she held back and showed a prudish side (maybe for the worry that the film might be too closely associated with her directorial debut, Scarlet Diva (2000), perhaps?). It felt odd taking into account her overall throw-it-all-out-there approach with the rest of the film.

I completely admired that Argento had the guts to make the film her way though. In the end it’s not anything truly amazing, or resoundingly fresh, but it contains an individual spiritedness that can be lacking in films reminiscent of this type - I'm thinking of Larry Clark's Kids (1995) and Another Day in Paradise (1997), and the faux-MTV grit of Spun (2002) here. And would she really care about critical back-slaps of approval and star-ratings anyway? I doubt that she was after all-out universal adoration. She stuck to her convictions and created a piece of work that came from the heart; deceitful or not, it was firmly in the right place as far as she was concerned.