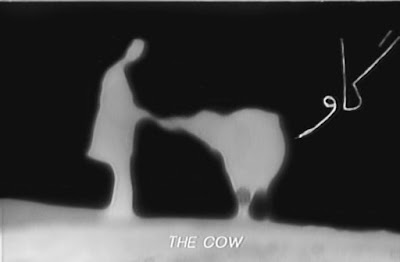 Hassan (Ezzatolah Entezami) loves his cow dearly. It’s clear from the very first scenes in Dariush Mehrjui’s lustrous, though rough-cured film – where he walks it over hillsides and delights in washing it in a river, himself alongside it – that he’s made some kind of personal bond with it, defined sometime before the film’s narrative begins. Though, it’s his love for the eponymous cow that ultimately destroys him. He lives in a tiny, remote Iranian village with his wife and the cow, which happens to be the only one in the community. When the cow is found dead, the other villagers decide to bury it and tell Hassan that it ran away. Hassan is so singularly devoted to it that when he discovers it "missing" it sends him literally mad.

The village of the film’s setting (a real one, indicating Mehrjui as a champion of near-realism, and a forerunner to the likes of Kiarostami, Panahi etc) is treated much like a stage set (indeed, the film was taken from a play by Gholam-Hossein Saedi). The villagers assemble in their daily routine, around its central area: a rectangular, man-made reservoir surrounded on all sides by houses and a few paltry trees. Most of the action occurs here, with several scenes taking place on the hilly outskirts. Mehrjui initially maps out the location in a series of still shots depicting in a calm, discreet manner its occupants. His camera casually observes them, letting them interact with the emerging narrative as and when. The opening montage doesn’t seem typical of standard narrative establishing shots. It very much seems to adhere to its own unique template; any one of these concise still images is held for no longer than necessary; all are economical and completely unfussy, effortlessly and gracefully seguing the story forward. 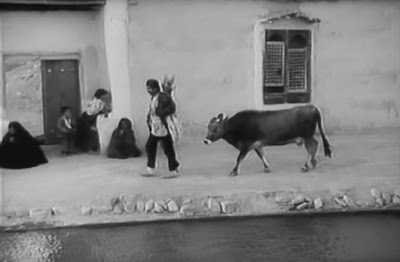 The focus on the silent faces of the men and women (who witness a “village idiot” being tied up and ridiculed) show with straightforward precision what a barren, desolate place this is. The use of sound, particularly in the early scenes, was the first of many impressive things noticeable about how powerfully The Cow creates mood; how the sound is designed to immediately set the tone of the film, in conveying this quiet desolation. The wind noisily blowing through trees, that accompanies the parade of blank faces, signifies an impending unease, as each shot gently but ominously gives way to the next. It somehow distinguishes the film from other early examples of Iranian cinema of the time through a resolute individualism; while there was a similar background muteness surrounding the solitary old station master (Zadour Bonyadi) in Sohrab Shahid Saless' Still Life/Tabiate bijan (1974), the pared down diegetic sound cemented the character's loneliness, whereas the constant aural activity in The Cow suggests a busier, more communal environment.

Imagery of swaying grasses and pelting rains sit side by side the often troubling events in the film, most often those that take place on the periphery of the village, where the threat of intrusion by Boulouris soldiers is likely (though they ultimately prove no threat despite the community’s fear of them; the villagers themselves actually create and execute their own downfall, fatefully entwined in Hassan’s situation). The black and white photography is illuminating. It may feel rough around the edges (the film has certainly aged somewhat), but the stark whites reflected off the houses in daytime contrasts elegantly with the pitch black, more fast-paced nighttime scenes. This balance is achieved so effortlessly that I was struck by how fluidly it progressed the film. 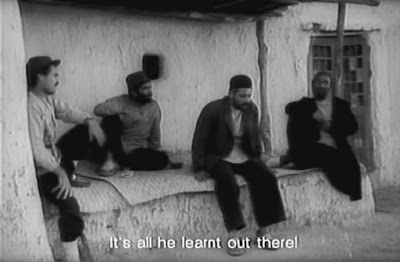 The Poetic languidness at the very heart of The Cow arises organically out of the story, and is enhanced beautifully by Hormoz Farhat’s evocatively pared down score, which readily echoes the lively observation of the villagers and their relationship to Hassan. As events turn sour, and get strangely dark, the imagery loses none of its fable-like lyricism, making the more troubling aspects of Hassan’s plight all the more saddening. When he’s in the cowshed – after seeming to have had his personality somehow merge with that of his dead cow’s – the camera solely films from Hassan’s viewpoint inside, showing the villagers looking in, isolating him from them but keeping us, the audience, with him. It's a simple piece of direction, but it's entirely apt in earning our empathy. Mehrjui’s well-placed camera ensures we see how tiny the window is, crammed full of the peering faces of people that once cared more than they do now, and may never again therefater. But here, in what feels like a minor but still revelatory move (within the environment the film describes), Eslam, Hassan’s most loyal friend, brings him food. Stigma makes way for kindness. The two men momentarily catch each other’s down-turned gaze and the terrible weight of regret is visible in their eyes. It’s a small, almost throwaway moment that manages to contain a gut-wrenching force: betrayal, comradeship and loss are too briefly addressed in a mere glance.

The Cow ends on a note of hopelessness, but it doesn’t undermine any of the humility on show elsewhere in the film. If anything it underlines it. A shot of Hassan’s wife on the roof of the couple’s former home, alone and deflated by her husband's demise, shows how the resigned despondency of events in the village has replaced the joviality of the daily grind. but it doesn’t eradicate it entirely. Eslam seems to have had some sort of mini-epiphany through his observation of Hassan’s experiences. There's something, a regrettable longing perhaps, in his decisive last minute actions in the film’s closing moments that suggests Hassan won’t be forgotten. As Hassan’s wife watches Eslam walk off toward the empty desert on a probably fruitless mission of belated salvation, the realisation dawn's that the village won’t ever be the same again, but somehow still may perhaps go on in exactly the same way regardless.