Attack of the Loons: Dirty Sanchez: The Movie vs Jackass: The Movie 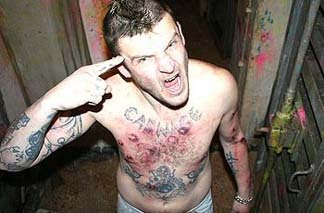 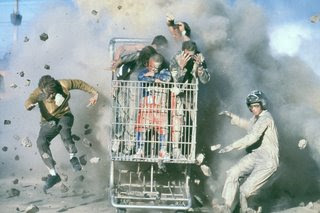 Which one is better? There's only one way to find out: Fight!

It wishes it were Jackass though. It isn’t and won’t ever be; Johnny Knoxville and co. got there first, and did it better. The Welsh imitators will never have the crude sense of cheeky abandon that they had. The games of juvenile one-upmanship here pale in comparison to their US predecessor’s roughly strewn inventiveness; they can replace Knoxville’s water-rocket bikes with as many fish-hooks to the foreskin as it takes, it just doesn’t seem either shocking or flinch-worthy this time around. It just comes off as hackneyed déjà vu.

Sanchez has some needless, misdirected homophobia concerning the identity of some Thai transsexuals they happen across (and then a bit more elsewhere) and a brush (a gross-off?) with a Japanese collective equivalent that do actually seem to have some of the Jackass charm (and the Sanchez chancers look scared stiff of them), but everything seems to somehow miss the point.

Knozville’s gang were likely to be offensive to some people’s tastes, but they were all-embracing, inclusive pranksters, targeting their skits playfully at one and all: from Hollywood stars (Brad Pitt) to random passers-by, though mostly at each other, all in the name of a good belly laugh. Sanchez are too cliquey and hetero-centric by comparison; their forcibly high testosterone levels seem to induce a kind of standoffish mean-spiritedness and prevents them from actually engaging with their foils.

There’s only so much vomit drinking and inane mugging to camera to be consumed before this jejune crap gets rapidly boring and reaches tedious overkill; any laughter evaporates all a bit too quickly, and disappears without much of an enduring result. There was something wonderfully charming, and lastingly funny, about Knoxville merely riding his upgraded bike into a lake, or Steve-O getting trapped in an upside-down portable toilet: they performed the stunt, cracked the joke and were effortlessly on to the next thing with no fuss. Sanchez clearly aren’t fussy either, but they tend to hang around after their gags, like a bad smell, and ensure each other definitely, like, got it, man. Jackass were simply more intuitively funny.

Director John Waters has openly acknowledged his love and appreciation of the Jackass lot’s TV shows, and he even appeared in their film's follow-up. That’s more like it. After all, he’s the one who really started all this: Divine scoffing poodle shit at the end of Pink Flamingos back in 1968 set the bar high for all this scatological japery. The Dirty Sanchez crew talk shit, but I bet they’d never be caught dead eating it.