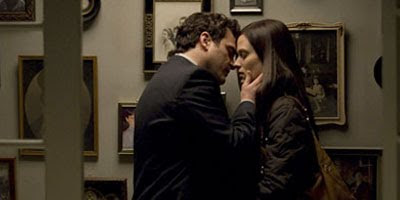 James Gray is one of the most interesting directors working in American cinema right now. He only has a thrifty four features under his belt in sixteen years: apart from Two Lovers, which is my selection for fifth favourite film of last year, he has made Little Odessa (1994), The Yards (2000) and We Own the Night (2007). The first and third films here (The Yards is the one which has so far evaded me) have all contained much style and directorial flair, and are well worth seeing. But Two Lovers goes one better by being one of the very best American films of quite possibly the last few years. Set in and around the Brighton Beach district of Brooklyn (all of Gray's films have been set in New York; he grew up in Queens), it's the story of Leonard Kraditor, a suicidal and very likely bipolar guy who, after being rescued from a probable suicide attempt by plunging into the East River (following a tumultuous split with his fiance? - this detail is slightly muddy), goes back to live with his Russian Immigrant parents (Moni Moshonov, Isabella Rossellini) in their apartment block; there he meets flighty, already-attached party girl Michelle (Paltrow), but is also introduced to Sandra (Shaw), a more homely, Jewish friend of his family. Leonard becomes romantically involved with both women; the thrust of the film is devoted to how he copes with his life through their affections. Most likely, Leonard and either one of the two women make up the two lovers of the title, or it could be that the women are, collectively, his two lovers (the title has possible multiple meanings in the same way that Woody Allen's Another Woman (1988) was open to interpretation). But it's a romantic drama in the most oblique sense: a love triangle film but with one of its edges slightly worn away.

I actually put off seeing it for a while after I first read about it. My initial thoughts were that it was going to be another '(500) Last Kisses in a Garden State' (Two Lovers' plot outline reads dangerously close to any number of recent Zach Braff and co. drizzly indie flicks), and would therefore be nearly two hours of self-involved twaddle that I didn't need to see. I was worried that Gray had succumbed to this hackneyed trend and buckled under possible financial and/or studio pressures to lighten up and go with the flow. I should've had more confidence in him - Two Lovers is anything but self-involved. It stops from being egoistic just in the nick of time. In fact, what it does is it takes a character who is on the verge of disappearing into his own miserable existence, fishes him out, dries him off and guides him in another direction - that of hopeful, living possibilities.

It avoids tired and easy clichés and pulls back from total absorption in dour male whimsy to seek out a brisker purpose for the narrative. The film - and by proxy Phoenix's character - does on occasion muddle in moments of severe introspection, but these are positioned at just the right junctures in the film, and come loaded with insight through the way Gray's camera doggedly attends to every one of Phoenix's well-articulated gestures and mannerisms. We get to know Leonard closely by way of Phoenix's subtle and perceptive central performance (my favourite from a male actor in '09 - and I'd say a career best for him), and through Gray's and co-scriptwriter Richard Menello's expertise in writing real, absorbing characters - this extends to the entire cast, especially Vinessa Shaw's well-judged Sandra and Rosselini's gentle maternalism as Leonard's mother. 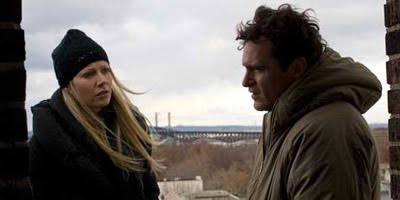 One of the most tremendous aspects of Gray's direction in Two Lovers is its ability to capture both the right tone of fleeting and furtive relationships, and to then let the relationship's crucial or most heartbreaking moments play out in surroundings which not only act as outward atmospheric mirrors to internal emotion, but also have an indelibly concrete sense of time and place. Two scenes come to mind: the first of two instances where Michelle telephones Leonard to meet her on their apartment's roof to update him as to their relationship status happens at dawn. (In a Braff et al film these updates would invariably be done via Facebook.) The camera glides right to left, observing the couple through gaps in a wall, with the Manhattan skyline barely visible beyond Brooklyn. This particular setting - in the crisp light of early morning New York, with the sounds of distant train whistles, gulls flying overhead and a cold wind blowing across the rooftops - beautifully assists in conveying how Gray's characters live theirs lives as if in a perpetual state of sleepless unrest, secrecy and avoidance of other people. (Odd, often unseen times of day are frequent).

Because Michelle is noncommittal at this point, and Leonard deeply lovestruck, the mood derived from the exterior locations evokes both characters' inner feelings succinctly without being at all trite. The second rooftop scene occurs at dusk, much later in the film (as the title infers, many events, scenes and characters come in twos or are somewhat visually doubled), after Michelle has committed herself not to Leonard but to her older lover Ronald (Elias Koteas), and where Leonard desperately tries to change her mind. Again, there's much meaning drawn from the atmosphere: mood is now aroused by returning birds, commuter trains and a fiercer wind cutting through the inky early-evening sky. This time the camera is placed slightly higher than before, now able to include in the frame segments of the surrounding borough below. The scene is emotionally cloudier, more narratively despairing than earlier, but a sign of possible hopefulness to come is indicated by the camera picking up on the sprawl of buildings in the outlying area, showing that the world is gradually opening up to include other people (other lovers in turmoil or at emotional turning points?), and that alternative possibilities exist elsewhere... Sandra's house is surely one of the many in the neighbourhood. 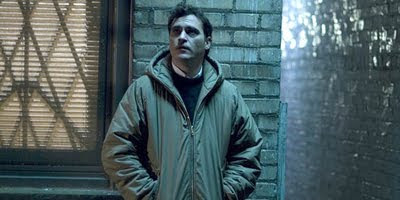 Sound design and, in particular, photography (fantastic work from cinematographer Joaquín Baca-Asay) are unobtrusively embedded in such emotive exchanges with a real sense of purpose and tonal accuracy. Gray and his collaborators use their medium to perfect cinematic effect in minute and evocative ways, allowing for a real sensory feel for the more defining, memorable aspects of the ups and downs of relationships. Many moments of well-observed drama, delicate humour and, more importantly, intimacy (such as the rooftop scenes above - and one significant late scene involving first the gift of a pair of gloves, then the discovery of them at a crucial point, which has a poignant, revelatory outcome) make Two Lovers a refreshing and standout film in its own right. It's a stunning, confidently-handled fourth film for Gray. It feels entirely personal, too, but without any pitying slides into turgid self-examination that often come as overloaded baggage with subjective explorations of love's bad turns and what they might mean.

Whether there's an autobiographical aspect to the film for Gray is open to debate, but his characters none the less feel truly individual creations, especially Leonard. It's essentially a film about one guy's problematic quest for love, with several added pitfalls thrown in. We've seen it all before in a variety of partially similar films over the last few years (Two Lovers' tone is notably similar to Todd Louiso's excellent exploration of love and grief Love Liza from 2002 - but it isn't at all diminished by the comparison), but Gray has a singular style that results in his film standing apart from the crowd. Two Lovers is a moving and enveloping film that lingered and rattled around in my head for many days after seeing it - and I'm glad that many wonderful images and moments still haven't shifted from my mind eight months on.
Posted by Craig Bloomfield at 17:11