The end of the year is here again. Or, well, was here. A lot of these end-of-year best film lists tend to get circulated from around November to January, but I like to have January as a buffer zone, an extra month's catch-up period in which to watch any last minute stragglers, so to speak. Starting off February will be my selections for the ten best female performances of '09, with a few more that I also thought worth mentioning. 2009 was in many ways a tremendous year for great female filmmaking, both in front of and behind the camera. In compiling my lists here (best films etc are to come soon) this was a definite theme that emerged; at times quite blatantly, other times more subliminally. My choices, I hope, somehow reflect that it was indeed a good year for the ladies.

In a largely male-dominated ensemble Diane Kruger (10) not only stood elegantly out, but also stole much of the guys' thunder in Tarantino's long-awaited war remix Inglourious Basterds. In her main, long scene - the almost unbearably tense and wordy meeting-turned-bloodbath in a German basement bar - she displayed, in character, her ability to captivate a room marvelously. She delicately towed the line with her covertly flirtatious banter as the wonderfully named Bridget von Hammersmark, all the time keeping the scene, almost solely, on track and in careful balance (she more than kept the equilibrium in the face of a paticularly explosive scenario), and with a feel for true film star verve. For me, the entire scene revolved revolve around her brilliant performance.

Tilda Swinton (9) was my favourite thing about David Fincher's youth-vs-old age mixed fantasy bag The Curious Case of Benjamin Button. The twenty-plus minutes roughly in the middle of the film's near-three-hour run time, set in a Russian hotel, where Swinton's Elizabeth Abbott meets with Brad Pitt's Benjamin Button amid the ticking clocks and hissing pipes of the midnight hour, to somewhat gradually fall in love, was the most rapturous sequence. She expertly displayed her status as one of the very best actresses working, and all this in a relatively small, but lovely and significant role. The small coda later in the film, where she realises a life-long ambition to swim the channel was a beautiful full stop to her story, and it added much pathos to the film. 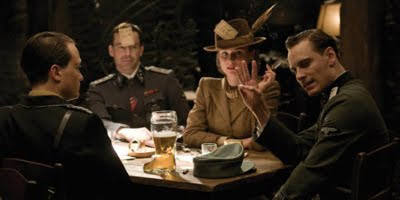 Beyoncé Knowles (8) should certainly be in more films based on her turn as Etta James in Darnell Martin's Cadillac Records. She entered the movie quite late, but proved to be a minor revelation in the role. It was a part that could easily have been over played, as James' life (or the slice we get to see here) was decidedly tumultuous, but Beyoncé plays it with conviction. And she sounds just great singing both I'd Rather Go Blind and At Last. She shows that she's much more than a versatile singer, and would surely add solid star class to any film where she may get to flex her considerable acting abilities.

In her break-out role, in 2004's Somersault, Abbie Cornish (7) gave a nice performance full of controlled subtlety, and now again, in Jane Campion's latest, Bright Star, she does the same - but this time she's even better. Cornish has been producing good work since Somersault (Candy (2006), Stop-Loss (2008) for example), but as Fanny Brawne she gets her best role so far: her small, obsessional mannerisms and constant attention to playful things (butterflies, sewing) reveal a girl being raptly aware of the world blossoming around her. But it's the joy written across her face whenever she's with Ben Wishaw's Keats that stays in the mind most.

In the otherwise rather dull The Burning Plain Kim Basinger (6) lights up the screen and lifts the film out of its self-important glaze whenever she's on screen. She is still more than capable of being incredibly good, despite not making a great many films these days - she's improving, film by film, the older she gets (here she betters her similar performance in 2004's The Door in the Floor). Her small but pivotal role as a breast cancer-surviving mother finally giving vent to what seems like years of suppressed passion (due to a dull, loveless marriage), and anger at the world, by embarking on an affair, was one of the most sorrowful and likeable roles I saw last year. The role is indeed relatively minor, the acting anything but. The aching confusion Basinger conveys in one particular scene (where, her secret having been realised by her daughter, she has to be at once the admonishing mother and the shocked and rumbled adultress) is expertly handled with skilful ease. An actress given to more histrionic outburts would've stopped the scene dead - Basinger gets each nervy glance and gesture spot on. This is the film for which she should have won the Oscar, not L.A. Confidential (1997). 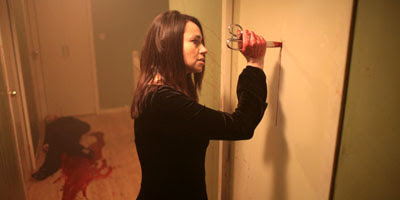 Béatrice Dalle tries alternative means to get Inside

Béatrice Dalle (5) added just the right tone of freakish menace as La femme in French gore flick Inside/À l'intérieur (2007), which finally got a release in the UK in 2009. From her first sinister close-up, lit only by a match that illuminates her face in all its jolie laide glory, to her demonic mother-in-waiting on a vengeful shitfit later in the film, Dalle proved inspired and entirely apt casting. She is one of the most watchable performers in cinema, with a face hard to look away from however much, here, in this particular role, we might want to. Phantom figures and midwifery looked awfully grim as played out by Dalle. Is it right and fair to say it looked like she was having fun in the role? Bad girls rule.

Everything we need to know about the character Melissa Leo (4) plays in Frozen River (Ray Eddy, a working class trailer-park mom who makes ends meet by transporting immigrants across the Canadian border into the US) is contained in the first few minutes of the film. Ray is on the phone in her car, door open, smoking a cigarette and quietly crying. It's not just the minute actions performed or the way director Courtney Hunt uses her camera incredibly well to capture them, it's how immediately and indelibly Leo manages to tell us every little detail about the woman we will get to know, to almost live with, over the remaining 90-minutes, all through subtle and sensitive expressions, all entirely non-verbal - and more meaningful because of it. It's easy casting, sure, but perfect casting all the same. Kate Winslet won the Best Actress Oscar last year, but (co-nominee) Leo gave the infinitely better performance.

One of my favourite underrated actresses, Melissa George (3), was blisteringly good in the time-warping horror-thriller Triangle last year. I've been a fan for several years - after impressive small and/or supporting turns in the likes of Mulholland Dr. (2001), Down with Love (2003), The Amityville Horror (2005) remake and 30 Days of Night (2007) - and now she gives her best performance to date, as a mysterious woman trapped aboard an abandoned phantom(?) ship, where increasingly disturbing events are repeatedly played out again and again. George's character is desperate to get back on dry land (and to a stable time zone) to take care of her son, or maybe to clear up a few secrets that she, and the film's writer (Christopher Smith, also its director), have been carefully withholding from us. George was better here, in a solid genre offering, than many of her perhaps more overvalued, and Oscar-baiting, contemporaries have been in their last few films - the kind who usually get widespread awards recognition year-on-year. I'd gladly watch Triangle repeated on a loop over, say, The Reader (2009), Notes on a Scandal (2006) or The Constant Gardener (2005) any day of the week. George's character's fear and exhaustion, that gradually and believably turns to forceful determination, is vividly conveyed through some tricky and elaborate scenes - and she never falters for one moment: her performance keeps the film afloat, and makes its often daft, but always exciting, events work. In the film's dénouement she shows further skill and depth than even earlier in the film, and it's these scenes that should convince anyone just how good she truly is. Keep up the great work, Melissa - I'll happily keep on watching every film you make. 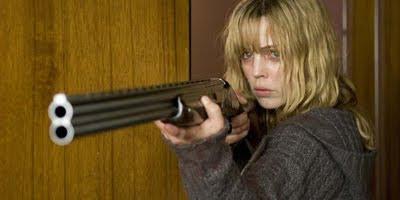 Melissa George shooting on all cylinders in Triangle

Michelle Williams (2), in Kelly Reichardt's second film Wendy and Lucy, was unvarnished, weather-beaten and real. Her performance as Wendy wasn't immediately easy to warm to, but proved entirely worth the investment after merely a handful of scenes of this brilliant, unsentimentally heartfelt film. Williams gives very little away as to Wendy's increasingly deepening emotional state, as her journey toward finding work in an Alaskan fish cannery abruptly comes to a halt - first due to her car breaking down, then because her travelling companion, her dog Lucy, is impounded - but slowly, quietly and, through the gradual piling up of misfortune, we see how utterly fragile she is. Reichardt displays a deft hand in withholding the kinds of vital pieces of information many films give away all too easily, and when they do subtly arise it's incrementally channelled through Williams' beleaguered exasperation. Watching Williams here is fascinating. By the film's end I found I not only warmed to Wendy as a fully lived-in character, but also became entwined in Wendy's life completely; through how the performance is cleverly constructed, it allowed me to almost directly feel the way forward alongside her. And that level of audience-character connection is high praise indeed.

The best female performance for me last year came from someone I hadn't heard of before. As with Eva Löbau in 2005's The Forest for the Trees I was totally caught off guard by an actress relatively new to filmmaking. Hilda Péter (1) was astounding as the title character in Peter Strickland's singularly impressive debut feature film Katalin Varga. After revealing to her husband that their son is not biologically his, Katalin takes the son on a journey to discover the truth behind some kind of dark secret involving a man from her past. Here starts her bizarrely creepy path toward a possible answer to her questions. It's a revenge trip of sorts for Katalin, and throughout Péter never allows her to fall prey to victimisation or easy sympathy; she creates an occasionally fraught, level-headed and certainly determined performance out of a decidedly bare framework. We work hard to fill in the gaps and silences provided by the moments where Péter and Strickland let us simply observe Katalin. The best (of many) involves an afternoon boating trip where Katalin confronts the (possible, probable) target of her search: Péter performs a heart-wrenching, though coldly delivered, monologue about the key event of her past - the reason she is there in the first place - which showed her sly skill with words and intricate gestures. With Katalin Varga Péter has created a peculiarly hard-to-fathom and uncatagorisable facet of fractured femininity that was riveting, fresh and, in the end, the best female performance last year.

Next up: male performances
Posted by Craig Bloomfield at 21:42