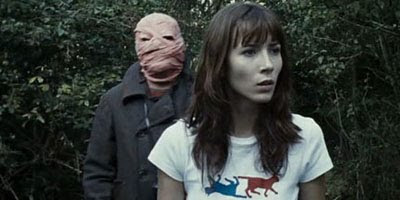 My reason for chalking up a list of at least thirty-or-so films each year is simply an indicative way of saying that I liked them more than the many others (the total for 2009 was roughly 320, not counting rewatches). Giving them order helps me define what I like and why: it's my personal barometer of how my tastes might change, or even remain the same. It acts as a shaping tool for possible future selections of what to watch or which filmmakers to keep up with: I now know I'll go out of my way to endeavour to see what Gideon Koppel does next; I'll continue to include straight-to-DVD titles if they are as good as The Signal. This way a qualitative order can hopefully necessitate my growth in film watching. And that all sounds just dandy to me. Enough pre-amble - on with the matter at hand.

I watched Timecrimes twice on the same day (as I did with another entry in the ten, Martyrs): once on my own during the day; the second time with my partner, who I was staunchly certain needed to see it too. It had an addictive aura about it. This same-day repeat viewing should've tipped me off that it was destined to be a favourite; it helped me properly absorb and iron out a few of the plot's effectively tricksy loops, too - the bare outline of which goes something like this: Héctor (Karra Elejalde) and his wife Clara (Candela Fernández) have just moved into their new house. That evening, Héctor spots a girl through his binoculars stripping in a nearby forest. When he goes to investigate he finds the girl (Bárbara Goenaga) laying naked on some rocks; a mysterious man with a face wrapped in pink bandages appears and stabs Héctor in the arm with a pair of scissors. Héctor runs off and the man gives chase. Héctor arrives at a laboratory-cum-silo perched on a hillside, and inside meets a scientist (played by the film's director Nacho Vigalondo) who hides Héctor in a strange tank filled with a milky liquid so he can escape the stranger in the bandage. When the scientist opens the container, Héctor emerges precisely one hour in the past: the container is some kind of time travel device - now there are two Héctors in two one-hour-apart time zones. To set things straight Héctor mark 2 has to attempt to replay the events leading up to this moment so all goes back to normal. But things don't, inevitably, go smoothly.  It may, or may not, solve who the bandaged man is, and what he wants with Héctor - and maybe why there was the naked girl in the woods in the first place. 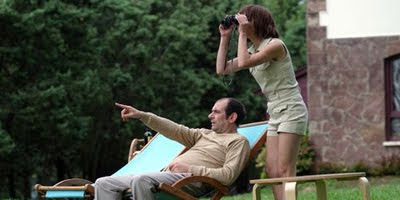 The first watch opened up many questions as to what was happening, and when. But I never got lost in all the contorted time-warping shenanigans. The events of the plot are surprisingly clearly laid out, despite including two or three time zones, repeated sequences and identical characters. Vigalondo evidently thoroughly planned out what would happen, and in what order, to a fairly concrete degree. Without it the intricate chain of events in the film may not have been half as expertly carried out. Each little detail fits the rest perfectly, and every scene dovetails with the next in a pleasingly effective way; scenes detailing the main plot elements that drive the story are well placed to arouse maximum coherence (praise should too go to editor Jose Luis Romeu who surely must have had a tricky job to do). The world Vigalondo maps out actually kind of adds up, and makes its own kind of sense - as much as a time travel film can make any sense (some suspension of disbelief is obviously required here and there).

At first glance Timecrimes doesn't appear wholly original, but it does its own thing in a unique way all the same. It's certainly a better time trip than Shane Carruth's impenetrable debut Primer from a few years ago (which mistook smart-alec incomprehensibility for integral mystery), and, although I liked it a lot, last year's Triangle (also on my best-of list for '09, though at #17) was essentially a retelling of many of Timecrimes' key ideas; also Jet Li's sci-fi martial arts flick The One (2001) used a similar alternate reality/multiple protagonist theme seen here. A few lifts here and several borrows there are discernible, but they seem to come more from older examples of horror cinema than from recent science fiction. The giallo mark of Mario Bava and Dario Argento is apparent too. And everyone's favourite influence, Alfred Hitchcock (particularly Psycho (1960) and Rear Window (1954) - spying on girls through binoculars always gets a man in deep water), is quite clearly alluded to. And from the film's comedic elements it's likely that more lighthearted examples of time travel films, such as the Back to the Future trilogy (1985-89) and the Bill and Ted movies (1989, 1991), didn't pass Vigalondo by either, though they're only barely noticeable (in the same way that, say, Michel Gondry has also referenced such films in the past).

Also, the sack-headed villain has recently been a trope du jour in both English language and world cinema (here it's recreated with bandages, though the effect is the same): Batman Begins (2005), The Strangers (2008) and The Orphanage (2008) have all featured bad guys wearing potato-sack headgear to assist in scaring the bejesus out of the audience. It's almost becoming a device for scary movie grotty-chic. However, I was more reminded of Charles B. Pierce's cheap, moody murder tale The Town That Dreaded Sundown (1977) where a woods-dwelling serial killer dons a hooded sack to carry out his killings. Although in Vigalondo's film there's an effective narrative reason for the mysterious bandaged man to appear as he does, and it's both surprising and funny.

Despite all this though, Timecrimes still feels entirely fresh. Its smart style doesn't tip into too-clever knowingness, and its desire to entertain remains constant - it's kept footsure and confident throughout. There are many genuinely impressive shocks and surprises that aren't overtly signalled and come at unlikely, well-timed moments: when the bandaged man turns to camera and mimics Héctor's looking-through-binoculars stance it's properly unsettling; a repeated car crash sequence newly reconfigures familiar assumptions and unearths fresh clues on the central mystery; and the use of several seemingly inconsequential everyday objects (scissors, telephones, binoculars, a keyring and - most amusing - the Schrödinger's cat-like print on the girl's t-shirt) have either a significant bearing on the plot or resonance within the film's themes, resulting in even more layers of efficacious meaning in retrospect. 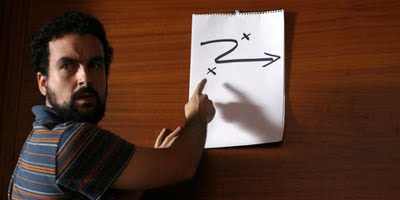 Since seeing Timecrimes I've searched out all of Vigalondo's previous short films, and they're every bit as good as his debut feature. He was nominated for an Oscar for his 9min. comedy 7:35 in the Morning/7:35 de la mañana (2003), about a girl who enters a restaurant and his met with silence from its patrons, and Crash/Choque (2005) - where a couple's date on a bumper-car ride gets ruined by a group of teenagers - was a great deal of fun. More recently Sunday/Domingo (2007) was a great one-shot sci-fi short; and Marisa (2009) detailed a man's love for one woman who appears to morph into other women over time and space. Vigalondo has already created a bold signature style for himself, and I look forward to what he does next. (A brief search says it'll be a meta-videogame-themed film called Gangland.) Right now, I'd say that he's shaping up to be one of my favourite new filmmakers. He knows that the limits of genre cinema can be tested to creatively inspiring ends, whilst not making them feel as if they're above genre filmmaking (a big bonus in my view - the flipside of this being M. Night Shyamalan's entire filmography of quick genre ideas coated with the disingenuous sheen of arthouse filmmaking).

I watched a festival Q&A clip on YouTube of Vigalondo discussing Timecrimes, his career so far and future aspirations that confirmed how passionate and committed he is to his profession. He's also amiable, good-natured and funny. It's clear that he knows what he's talking about. In thinking about Timecrimes for these lists, rewatching certain scenes and revisting the earlier short films, it's clear that from the moment the end credits rolled on that first viewing, Timecrimes was always destined to be high on my year-end list. It's a fine, engrossing and addictive film. And I'm now ready to watch it all over again for a third (or is it fourth?) time. I don't know, it gets tricky.
Posted by Craig Bloomfield at 19:44