Each Tuesday I'll post a still from the opening titles of a film - as a celebration of great title sequences, cinematic use of typography and the feeling of anticipation in waiting for a film to start... 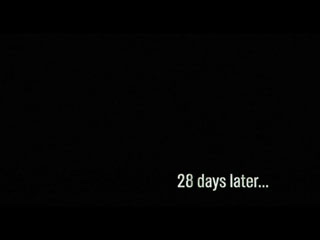 Simple. No fuss. Direct. White sans-serif type on black. No capital letters. Positioned to the lower right-hand edge of the screen like a footnote or a prompt to 'turn the page'. Unassuming, yet ominous. Danny Boyle's film's title (designed by Creative Partnership) appears after an intro scene where animal activists release a caged chimp not knowing it's infected with a deadly 'rage' virus which will turn people into bloody-eyed "zombies". It tells us: twenty-eight days have elapsed, now what? The ellipsis is the key; it suggests bad things are to come, and it's gonna get much worse. And much worse it got. What I like about the way this title is used (apart from the fact that it avoids the usual horror film clichés of fractured lettering or red to denote blood) is that after the main part of the story finishes, it appears again - after the freeze frame of the surviving characters in the back of the taxi - before the film's epilogue: another twenty-eight days have gone by and this is what happened next. It's a great, minimal title which is all about dreadful pauses and menacing what-ifs. It's entirely apt in setting the right tone and then helping bring closure to the film.
Posted by Craig Bloomfield at 20:08