At the Cinema: White Material 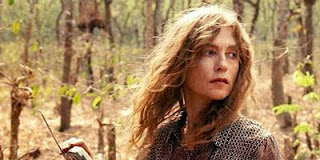 One of the many highlights of Claire Denis' latest, White Material, is studying the multiple variations of frazzled emotion which emanate from Isabelle Huppert's endlessly watchable face as she frets and contemplates her future. Huppert can always be relied upon to give good visage in a film, and her first collaboration with Denis allows her plenty of valuable face time. (Although she's as often frenetically shot in motion, from behind or in profile.) Her character, coffee plantation manager Maria, struggles to retain her grip on business and family relations as an unspecified civil war breaks out in her region; militia patrol and rebel soldiers advance on the plantation as things rapidly fall apart. Never one for a typically linear approach, Denis shows events from Maria's perspective as she later returns to the plantation via bus; her flashbacks are shown as fractured and piecemeal. Denis' intricately diced-up narrative - co-written with French playwright Marie NDiaye - makes restrained and allusive comment on the complex arrangement of white populations within African countries. Denis drops the occasional concrete hint as to the social and political observations she wants to arouse - through half-heard dialogue or background detail - but the overall tone is suggestive. As ever, her indistinct, high-fevered and rhythmic imagery leads us to consider what deeper resonances the story contains. 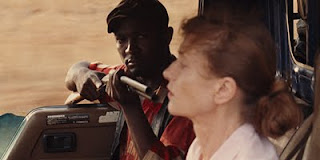 It's a heady, visually irrational and at times perplexing film; with Denis I wouldn't want it any other way. The abstractions of her film worlds somehow make apt sense by the time they reach their destinations. But just don't ask me why or how; I like to let her films remain wide open, stay as endlessly hazy memories. White Material wondrously falls in line with disjointed, less cohesive work such as The Intruder (2004) and Trouble Every Day (2002) more than it does with last year's equally excellent, though arguably more fluid and relaxed, 35 Shots of Rum. But it also has a torrid atmosphere, a thick with off-kilter dread, that even surpasses 1999's white-hot Beau travail. (And the setting of course recalls her 1988 debut, Chocolat.) Many of the plot strands waywardly veer from the main focus on Maria to bring forward periphery characters and events - such as Isaach de Bankolé's injured revolutionary 'The Boxer', or her son Manuel's (Nicolas Duvauchelle) disturbing, revelatory sea change in the desert - but wind their way back toward Maria and the plantation for closure. But Denis is never not in control of her haywire directorial compass. The day I see an easily fathomable Denis film will be a disappointing one for sure. This is not to say that she's merely serving up another dose of predictably "difficult" art-filmmaking, however. She mines a singular path, but is never slipshod with her material, and still find ways to mess with the limits of what she can make the film frame do for her. Every one of her films is markedly different from the next; each new one contains the zest and openness of a first-time director. 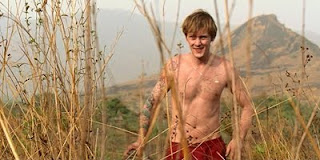 The acting is uniformly good: Huppert, obstinate, strong-willed as Maria, is superb (I've rarely seen her less than). Watching her buzz distressingly from scene to scene, like someone constantly trying to shut off a raw nerve, is one of White Material's innumerable pleasures. Excellent, too, are Duvauchelle (whose desert epiphany is all the more dark for the way Denis silently tracks it and the manner in which Duvauchelle underplays it) and Christopher Lambert as Maria's ex-husband. Regular Denis cinematographer Agnès Godard is missing in action, but Yves Cape replaces her, and makes the warmth of the African setting (White Material was filmed in Cameroon) unimaginably chilly. And the music, by another Denis mainstay, Stuart Staples of the Tindersticks, is as good and as haunting as ever. Good work, yet again, Denis.
Posted by Craig Bloomfield at 17:26