In the run-up to Halloween I thought I'd post up a series of entries briefly looking at What I Like the Most about certain horror films. I'm nearly done on my London Film Festival duties, and other film-based malarkey, and will be back to normal posting here at Dark Eye Socket. But in the meantime, a few brief words about some aspects of some (randomly chosen) horror films for the interim, regardless of whether I had a good time or a bad time watching them. This first post, on Saw, firmly fits the latter.

To be honest, there isn't much that I like about these Saw films. (Having accidentally caught five minutes of Saw III on TV the other evening this was more than reconfirmed for me – and this is despite having seen all previous six Saw films at the cinema.) But what I do enjoy about seeing them are the unexpected comical highlights. During the first Saw (2004) I was quite content sitting there for ninety-or-so minutes knowing I was having a horrible time, but that the horrible time would end in a little under ten more minutes and I could go and watch a proper horror film. But then along came Cary Elwes' weird old lady impersonation. 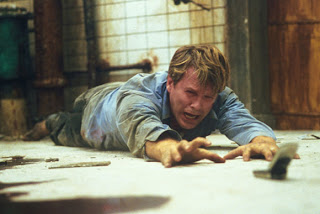 Elwes' performance was a joy to behold – and certainly painful to watch. By the end he was in a battered condition; his leg looked sore, but it was the acting that really smarted. Suddenly he goes from wholly unconvincing Everyday Doctor Guy (albeit trapped in a basement with half a leg off) to wholly convincing Feeble Old Lady (during the bit where he's crawling around on the floor: "Huuh, huuh, I've dohne it!" he says in an odd wobbly voice, after hacking the limb off). His not-at-all-meant-to-be-funny and ill-placed moans and screams were so out-of-sync with everything he conveyed beforehand as to be hysterically funny and plain baffling at the same time. Well, at least that was what I thought back in 2004. Either way, I was hooting like a demented owl. And having just rewatched him again in a clip now, it's still as funny as ever. (As funny as the couple competing to 'shed the pounds' in Saw 6, anyway.)

Having briefly checked out the credentials for this upcoming, and reputedly final, Saw installment ('The Traps Come Alive' – because, er, it's in 3D), a smile of wicked glee spread across my face: Cary Elwes is back! I always hoped Elwes would crop up again. And now he does. I sincerely hope he gets to crawl across a dirty bathroom floor, dragging his (lopped off) heels behind him. Roll on Saw 7. Or, um, Saw 3D. And then let them please put an end to the series for good. It was unintentional fun while it lasted. Kind of.
Posted by Craig Bloomfield at 22:50