At the Cinema: Priest 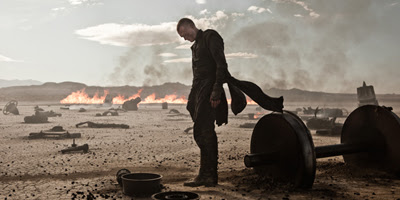 Priest fits in line with the likes of Underworld and Daybreakers – highly flashy, derivative entertainments which take vampire mythology and faddishly remodel it to fit multiplex expectations. In limp, uninvolving 3D it skips anything that might arouse intrigue or create tension (elements partially present in the above films) and just vaguely flings at us the necessary bits only; we get high concepts with low impact. To paraphrase Tom Waits: it’s got the bread, but not the butter. It’s a vampire clips package that feels cribbed from a better film that, sadly, doesn’t exist. There’s back story to be gleaned from the pre-opening titles animation, graphic novel series it’s based on and various snippets of terse, explanatory dialogue, but that’s pretty much where it starts and ends.

The main thrust of the narrative – Bettany’s ostracised Priest goes rogue to track down a pack of vamps that have maimed his brother (True Blood’s undead resident Stephen Moyer), kidnapped his niece and made a mockery of his faith – is too thinly conveyed and insubstantial, to the detriment of audience involvement. Had the filmmakers shown the source material any real affection they might have felt compelled to flesh out some of the more interesting concerns lurking on the periphery and incorporated them into the action. (Just how does the largely absent vampire queen command her army of eyeless blood-sucking beasts? What about the baffling, nagging mystery in Priest’s family background?) At only 87 minutes there’s limited time to get across anything other than the bare essentials. Its very hastiness suggests a studio squarely aiming for fast cash over myth- or franchise-making longevity. 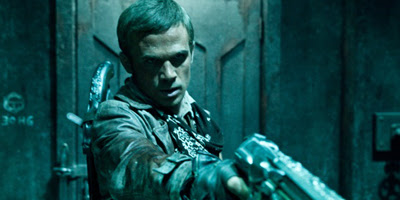 Director Scott Stewart likes his compositions symmetrical and neat, as if he’s taking visual cues from the cross itself. He arranges most onscreen elements with bland preciseness, be they a uniform gathering of religious elders, four equally-spaced monolithic statues or the dominant locations (a vampire’s hive, the horizon line of a desert landscape). Whether it’s intended to enforce the notion that this bleak, unforgiving and largely anonymous world operates under a higher power (God is order!), or if it’s merely Stewart’s rote, uninspired approach to direction is open to interpretation. But the flat-pack visuals, with their overused trendy slow-motion build up (a device that’s becoming commonplace in cheap-thrill adaptations such as this – does every back flip require such close scrutiny?) collapse more than they hold up. Stewart delivers just shy of what is required to make it diverting.

The assembled cast is like a roll-call in genre heaven. Bettany growls like he’s aping Christian Bale’s Batman, but he copes just as well with being the designated lunatic figurehead as he did in his last cheap religi-tainment with Stewart, Legion. Good eggs Cam Gigandet (as a sheriff) and Karl Urban (as a fallen priest/vampire-human hybrid) plug away with rugged pluck in sidelined roles; and Brad Dourif and Christopher Plummer (seemingly playing the high priest of haughtiness), though both sadly underused, gamely provide good role play, as they both, thankfully, always do. But I’d offer up the suggestion that if you are to have Maggie Q in your film it’s advisable to give her at least 50% more martial arts action than is regulation. In a film with much good (genre) intentions but such vapid padding, the good stuff needs to be highlighted wherever possible.
Posted by Craig Bloomfield at 11:11