This week my "Take Three" column (every Sunday, three write-ups on three performances in a supporting/character actor's career) over at The Film Experience features Eddie Marsan in The Disappearance of Alice Creed, Heartless and Happy-Go-Lucky. 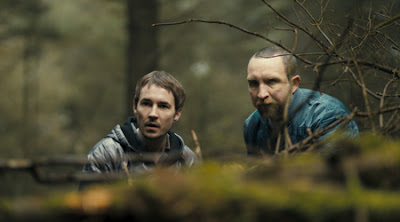 Martin Compston and Eddie Marsan (right) in The Disappearance of Alice Creed
Take One: The Disappearance of Alice Creed (2010) Marsan is elusive and perplexing as ex-con and current kidnapper Vic in J Blakeson’s British thriller The Disappearance of Alice Creed. It may be his best role to date. It’s certainly his most visible in terms of screen time and lasting impressions. Vic and Danny (Martin Compston) kidnap a girl called Alice (Gemma Arterton). We’re not initially certain why or what for, but surprising details emerge. It’s an intriguing, slow-burning three-hander, largely set in two rooms of one house, with a slippery plot that gets drip-fed to us with unsettling incremental unease. There’s a psychological and dramatic weight to Vic that Marsan smartly unearths. He utilises his familiar best attributes to expert effect, but twists them into something else. Vic spends much of the film in a desperate state. He gives orders to “assistant” Danny and threatens Alice. He’s in charge, but of what exactly is open to debate. But Marsan's expressive, layered acting style never lets caricature or over-indulgence creep in. Any more information will ruin the risk of ruining Alice Creed’s many wily turns; just know that both the film and Marsan are excellent.

Read the rest here
Posted by Craig Bloomfield at 21:24