This week my "Take Three" column (every Sunday, three write-ups on three performances in a supporting/character actor's career) over at The Film Experience features Paul Dano in The King, Cowboys & Aliens and There Will Be Blood. 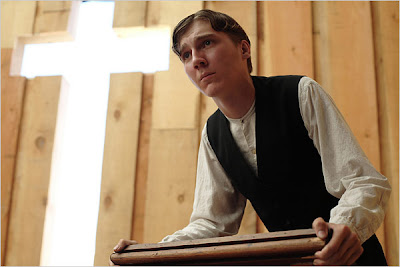 Take Three: There Will Be Blood (2007) It took two roles (brothers Paul and Eli Sunday) for Dano to go up against maniacal oil plunderer Daniel Day-Lewis (as Daniel Plainview) in Paul Thomas Anderson’s explosively oily There Will Be Blood. The religion theme is again present but here Dano’s graduated to fully-fledged preacher. The role very nearly wasn’t his, however. Dano only had a few days to rehearse his role as Eli, the bigger of his two parts. Kel O'Neill was originally cast, but was replaced with Dano (who was only originally down to play the smaller role of Paul) two weeks into the shoot; a total of three weeks of scenes featuring Eli and Plainview had to be re-shot with Dano instead of O'Neill. However, any casting interruptions don’t at all impede him on screen. If anything, the immediacy adds to the fevered vitality of his performance...

Read the rest here
Posted by Craig Bloomfield at 16:38