This week my "Take Three" column (every Sunday, three write-ups on three performances in a supporting/character actor's career) over at The Film Experience featuresViola Davis in Far from Heaven, Eat Pray Love and Doubt. 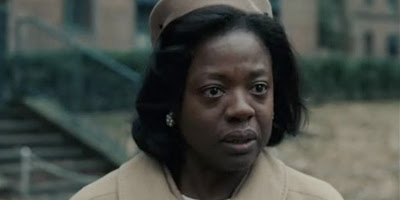 Take Three: Doubt (2008) If anyone’s going to make mighty Mezzer Streep question her certainty it may as well be Viola Davis. In Doubt, her one-scene, barely twelve-minute role as Mrs. Miller, mother to a troubled boy at a Bronx Catholic school, was of course performed entirely alongside Meryl’s sister act. An hour in, Davis’ brittle, quietly astonishing and astutely underplayed performance causes a major Nunquake measuring 9.5 on the actressing scale. She totters along in dowdy beige coat, armed with pre-work accoutrement (she never lets go of brolly or handbag – she “only has half an hour” before work) and, with pin-point concision, razes the film’s emotional territory. And all before a noon shift cleaning floors!...

Read the rest here
Posted by Craig Bloomfield at 17:59