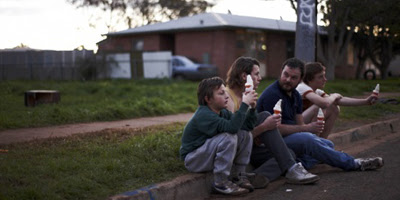 Snowtown (Justin Kurzel/Australia/119mins)
The eruptions of violence in debut director Justin Kurzel's Snowtown come sporadically, intensively and often with gut-churning abstraction. It’s an expertly crafted drama. A frank, corrosive study of evil’s many rhizomic strands.The bravely headlong approach to the infamous story of Australia’s worst murder case is deftly handled with breathtaking confidence and fluency of image. It’s intelligent filmmaking that questions a full range of unsavoury, hot-button subjects. Suitable post-Xmas dinner viewing this certainly ain’t! Kurzel’s smart, thoughtful directorial approach opens up many complex avenues of enquiry as to how we might ponder and understand the events of the story. With total keen assurance Kurzel utilises a variety of filmmaking techniques that equally dislodge and enthral our sense of grim spectacle as the film progresses. It depicts with convincing authority a whole repugnant mess of issues relating to the real-life case; but it's essentially about the indoctrination of a young man into a life of foul criminality. It’s this, the film’s central, unfalteringly bleak narrative thread that remains fixed in the mind for a long time after the film's last image. Snowtown is harsh, relentless and grips with a despairing force. It's positively caustic filmmaking.

More on Snowtown
Posted by Craig Bloomfield at 23:17