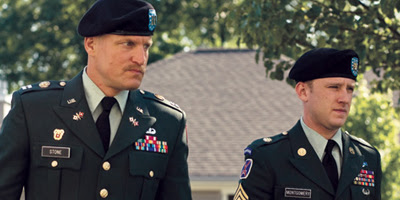 The Messenger (Oren Moverman/USA/113mins)
Although The Messenger was filmed in 2008 and received its US release in 2010 (then going on to nab two Oscar nods: Best Supporting Actor for Woody Harrelson and Best Original Screenplay for its director-writer Moverman and co-writer Alessandro Camon), it didn’t arrive on UK screens until July 2011. For a highly praised film concerning timely, contemporary themes, the distributors took their time. But it was worth waiting to see: I was enthralled by it as soon as it finished. Rebellious staff Sergeant Will Montgomery (Ben Foster), recently back from a tour of duty in Iraq after an injury, is tasked alongside stern, ex-alcoholic career soldier Capt. Tony Stone (Harrelson), to deliver the news of recently deceased soldiers to their families under the army’s Casualty Notification service. Will starts a tentative affair with one soldier’s spouse, Olivia Pitterson (Samantha Morton), in between learning home-turf survival lessons from Stone. It’s a film acutely attuned to the tread of everyday life – though marked by exceptional, unfortunate circumstances – and how alien it is to people unused to it.

It's a film willing to scrutinise and observe its characters; it’s unafraid to let them merely be, talk, and function in curious or messy ways without a significant amount of obvious baggage tying them to typical or easy traits. (The near-silent ten-minute scene between Olivia and Will in her kitchen is a masterpiece of loaded emotion.) Each of the three central characters has grievances and issues. That we coherently understand them is due to the effective simplicity of Harrelson’s, Foster’s and Morton’s nuanced performances. Foster gave the year’s best male turn; he embodied a familiar role without resorting to cliché and took it in a complicated, fascinating direction. Harrelson dug deep to relay cocksure wisdom flecked with sour regret; together they turned a pair of reluctant grief peddlers into awkwardly engaging people. And Morton believably turned the sorrow inherent in particularly tragic death on its side; she made thoroughly material one woman’s fraught life. Many of us may not have been in these people’s positions, but Moverman and co. convey their experiences in credible ways. Hearing news of a loved one’s death hurts deeply. And taking the brunt of a stranger’s crushing desperation or calm acceptance, having delivered them death on their doorsteps, comes with its own hopeless pain, too. Through this idea Moverman ensures we develop concrete bonds with the people we are watching. He’s a compelling filmmaker and The Messenger is a rich and thoughtful film.
Posted by Craig Bloomfield at 09:21