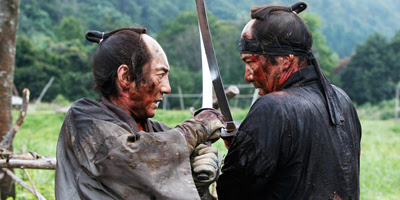 13 Assassins Jûsan-nin no shikaku (Takashi Miike/Japan, UK/126mins)
It goes without saying that a Takashi Miike film is always worth watching. I’d gladly spend time in front of any one of his films, whatever the subject, however vast or abrupt the length. His output is variable, sure, but the proliferation of his filmography means that there are some absolute gems and several definite great works. 13 Assassins is certainly one of his finest films. Compelling and unceasingly relentless for two-thirds of its running time, and starkly austere to begin with, it’s a tension-fuelled and kinetically forceful retelling of Eiichi Kudo’s 1963 black-and-white original of the same name. It sets the story up: the samurais of 1840s Japan are on the slide. To stop the tyrannical Lord Matsudaira Naritsugu (Gorô Inagaki) before he climbs the political ranks, a band of thirteen samurais, lead by Shimada Shinzaemon (Kôji Yakusho), are gathered together to ambush the Lord. As far as movie ambushes go, this one steal rolls all competition flat. After an intriguing, persuasive and determinedly low-key set-up, two words usher forth a prolonged, all-out assault: TOTAL MASSACRE – a blood red statement of intent scrawled across a taut banner on top of a dividing gate, soon to be blown apart by intense battle. Miike’s direction haemorrhages full-bodied action. Rain, mud and the rapidity of fiercely serious swordplay dominate the remainder of the film; 45 continuous minutes’ worth of swiftly-delivered carnage. It’s engrossing to watch. Miike doesn’t let characterisation diminish, though. Each of the characters is allowed moments and actions in which they rise or fall. It’s enriched by Nobuyasu Kita’s fluid photography and edited with crucial skill Kenji Yamashita. Miike’s direction, needless to say, is first rate.
Posted by Craig Bloomfield at 15:01