At the Cinema: Whip It 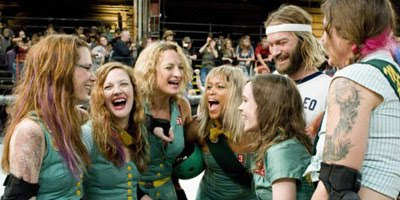 Drew Barrymore has lived enough of a life surrounded by films and filmmaking that it's really no surprise she would direct her own film one day. Her debut, Whip It (which stars Ellen Page as a small-town Texas teenager reluctantly coerced into taking part in beauty pageants, looking for something meaningful in her life; and finding it in the Hurl Scouts, a Roller Derby skating team), is as much a truly entertaining and goodhearted first film as it is a glorious culmination, so far, of her particular talents. She's always conveyed a carefree and amiable onscreen presence - part punkish attitude, part goof-off girl - in her work as an actress, especially within the last fifteen-or-so years, and it seems as if it's all been lovingly instilled into the making of this film. It's neither a riotous comedy nor a straight-up indie flick, but a sweetly-conveyed concoction of the two, as based on Shauna Cross' semi-autobiographical novel.

It does, though, feel completely Barrymore's own film. Indeed, she's managed to take someone else's source material and successfully inject elements of her own persona into it with ease. (It's probably not wide of the mark to say that Page is standing in for Barrymore; she's an apt fictional incarnation through which Drew can interpret her story.) It is about an all-girl rolling skating derby, though it's fully embodied with her own sense of charm and personality; everything is infused with the agreeable disposition that's defined her work to date. To say that she could be a budding comedy auteur in the making may meet a few sniffs of derision from loftier types, but Whip It is a great first effort that shows signs of lasting individual directorial talent. 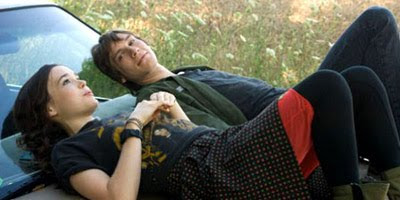 Daydream nation: Ellen Page and Landon Pigg in Whip It
It's not perhaps the most original story, but it stands out as significantly more easy-going and, for the most part, free of many of the quirky foibles of recent indie films. An obvious comparison would be Page's surprise Oscar-nabbing hit Juno from two years ago, or maybe a less tricksy - and female-centred - take on the burgeoning adolescent malaise seen in this year's Youth in Revolt (but without it's meta-character doubling, and replaced with a gaggle of riot grrrl-ish skaters!). But no one here waxes on about obscure foreign movies or overtly thumb their noses at typical teen mainstream interests. Well, not too much anyway - there is some love for semi-obscure '80s music and several alternative cultural references thrown around, but they're kept to a minimum and come across as voiced with enthusiasm and a genuine nostalgia.

The roller derby scenes are immense fun and are filmed with plenty of appropriate zest and sheer enjoyment. There are also wonderful details, and some seemingly inconsequential moments, within the film that are nicely spliced in and add to the charm on display in many of the more event-driven scenes: deflated from endless small-town burger serving, Pash and diner manager Birdman (Carlo Alban) indulge in a random kiss; Page giving her expensive pageant dress to a rival before a crucial contest; a nicely underplayed moment when Page discovers her dad's (Daniel Stern) secret sports-watching hideaway, and the surprise at finding out Maggie Mayhem (Kristen Wiig) balances skating with being a mother. The characters open up in small, telling ways throughout the film, incrementally revealing more about themselves - and each letting any issues with one another evaporate in the face of what really matters to them. Such scenes, which could easily have been played as coy, eye-rolling revelations, take a well-balanced left turn and become nicely downplayed, relishable moments. 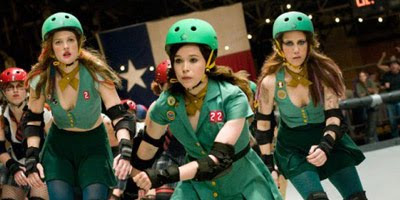 On a roll: Director Barrymore with Page and Kirsten Wiig
I'm one of the people who found Ellen Page's performance in Juno a touch on the irritating side, but here she shows that without the smarmy, know-it-all one-liners care of Diablo Cody she's an engaging screen presence. But every cast member fits their roles well and all deserve praise - again, this is certainly down to Barrymore's amiability as a director. I especially liked the relationships between Page and a laid back Stern, and with Marcia Gay Harden as her pushy mother; their interactions don't fall into cliché at any time despite occasionally threatening to head in that direction; both parents are portrayed as fully-rounded, life-worn characters. And I liked the casting of Andrew Wilson as the team's long-time oddball coach, Razor, too - a role that could've gone to a far more obviously zany actor, like Seann William Scott for example (or indeed Owen Wilson), but is performed with the right amount of humourous fatigue. But Juliette Lewis (as bitchy opponent Iron Maven), Kristen Wiig, Alia Shawkat, singer Eve, stuntwoman (and Tarantino fave) Zoe Bell, and Barrymore herself, as accident-prone Smashley Simpson, all contribute personable work, as do the remainder of the cast. (The names the roller gals give themselves are spot-on funny, too: apart from the above-mentioned names, there's Rosa Sparks, Eva Destruction, Bloody Holly and Page's own, Babe Ruthless.)

It feels as if Barrymore is both somewhat acknowledging her nowadays more veteran place in filmmaking (there is some comment in the film about age and still being willing to try out new things when you're well into your thirties) and graciously celebrating and passing the on-screen baton over to a younger generation of female stars. But it's the warmth of her personality (both in front of and behind the camera) and the pleasing verve in which she tells the story, consistently discernible in each scene of Whip It, that shine out the most.
Posted by Craig Bloomfield at 15:24