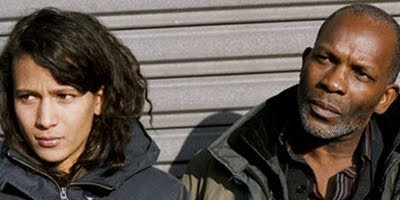 A few years ago I watched Claire Denis' Beau travail (1999) and Trouble Every Day (2001) and was bowled over by both for wildly differing reasons: outwardly they couldn't seem more different from one another, but both explore human desire and the need to possess and define others in bold, evocative ways; they are two of her very bests films. Between those two and 35 Shots of Rum, I didn't get the opportunity to see much of her work (on the whole her films tend to get limited releases here in the UK - mostly confined to London and the bigger cities). So when 35 Shots appeared at my local arthouse cinema I took the opportunity to catch it. I'm glad I did as it turned out to be my #1 film of 2009. It's an intimate, fascinating and exemplary film, full of many great moments of warmth, subtle human connection and vibrancy - it's simply filmmaking of the highest order. About two-thirds of the way into it, one scene set in a café (see below) convinced me that it was special. It confirmed that there's something indefinably unique and extraordinary in the way Denis films people merely existing, moving about in their own corners of the world.

Its simple narrative involves widowed train driver Lionel (Alex Descas) who shares a flat with his student daughter Joséphine (Mati Diop) on the outskirts of Paris. Ever since Lionel's wife died the father and daughter have lived harmoniously together in the apartment block; two neighbours Gabrielle (Nicole Dogue), a taxi driver who has long held a candle for Lionel, and Noé (Grégoire Colin), a longtime friend of Joséphine's living in his deceased parents' flat, and who is secretly in love with her, provide them with close company. But there's a feeling that it's time for this set-up to end, or at least drastically change for the four of them. Over a period of several weeks (though it may be less, days even - timescales are gloriously hazy at best in Denis' films) these four drifting characters, plus the friends and strangers they meet, experience events both minor and major and gradually arrive at some truths about where they are and where they are going in their lives. 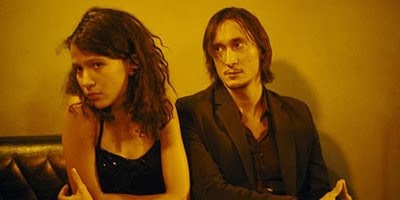 Momentous events in the characters' lives aren't depicted as any more or less significant than the smaller, more day-to-day events, however. A gift of a rice cooker or smoking a cigarette on the balcony of a flat are given as much - or maybe, discreetly, a little more - weight as Joséphine's eventual marriage to Noé or the suicide of Lionel's work colleague René (Julieth Mars Toussaint). Marriage, death, dancing, smoking, the giving and receiving of gifts are all levelled to the same plane: the grand and the matter-of-fact - sometimes easefully, sometimes problematically - co-exist at the same time, on the same day. This doesn't infer a stoic neutrality within the film's narrative, but an intuitive awareness that, simply, life is one continuous series of everyday shifts - meetings, departures, realisations and goodbyes - up and down, both accordant and disruptive. Denis has mastered such intricate expertise of her craft incrementally over her previous films and it's perhaps never been better delineated than in 35 Shots (well, to date anyhow). Her fluent, almost non-verbal knowingness in interpreting the complex tangles of human engagement is near unmatched in cinema. Nothing is overtly spelt out in any solidly tangible way, though with a little legwork it becomes endlessly involving. More than one viewing of 35 Shots - or indeed any of her films - is ideal and something to look forward to.

Above all, Denis captures with ease that beautifully languorous feeling of nocturnal endlessness - a night out without rules or definitions. The closing scene of Beau travail, where Denis Lavant frenetically writhes alone on the dancefloor to Corona's 'Rhythm of the Night', felt as if it could've easily lasted forever; and the early evening traffic jam that spontaneously results in a long night of passionate abandon for Valérie Lemercier and Vincent Lindon in Vendrei soir/Friday Night (2002) felt as if it happened at half the speed of the rest of the nightowls of Paris. Night time is Denis time. And here one of 35 Shot's pivotal and most wondrous scenes occurs at night: during an aborted trip to a gig (Gabrielle's taxi breaks down) the foursome end up seeking respite, and shelter from rain, in an after hours café; inside they are warmly met and are served food and drinks and music is played. 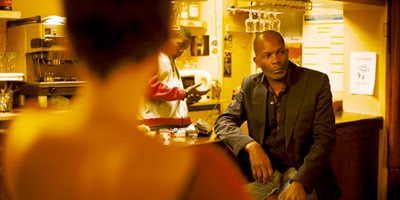 This scene sees the four almost wordlessly interact in a way they haven't before and arrive at truthful realisations about each other: they dance (Lionel with the beautiful proprietress of the café, then with Gabrielle; Noé with Joséphine) to the Commodores' Nightshift', then sit, together or separately, with each silently acknowledging the minute changes taking place in their relationships. It's a simple, deftly orchestrated scene (and possibly trickier to accomplish then it appears), that tells us so much about these people we've been spending the last hour with. The occasion of an impromptu night out, surrounded by people who work and play - and perspire with exhausted longing through both - creates in these characters the sudden whim to let on covertly what's going on, although with each not knowing what they'll be doing in ten minutes time, let alone the next day. The experience they were meant to have is happening elsewhere, but what they really want, the wonder of possibility, is right here. It's conducted as an accident with destiny.

Since seeing 35 Shots I spent time catching up on Denis' previous work that I'd missed: Friday Night (mentioned above), Chocolat (1988) and The Intruder/L'intrus (2004) were all equally as splendid, as are all her other films I've seen. She has shaped a body of work containing various themes, genres, ideas and tones, yet they are each one singularly hard to define. It's difficult to position her films to fit one all-encompassing pattern or motif. This reason, above many, is why she is one of today's most significant filmmakers; her films simply dwell longer in the mind than many others'. It's rare to find another contemporary filmmaker who uses core filmmaking elements in quite the same way she does, especially music and cinematography - care of her regular collaborators Stuart Staples (of the Tindersticks) and DoP Agnès Godard, respectively. The subtly muted colour palette stands out without being overtly highlighted, whilst also blending seamlessly into the environments of the characters (the inky early evening light cast over the train tracks where Lionel works, the dulled reds and blues of bedsheets, the interior of the after hours café aglow with life, and so on), and the affective score is nicely reverberant from scene to scene, and is nearly as intoxicating as the thought aroused by the film's title. 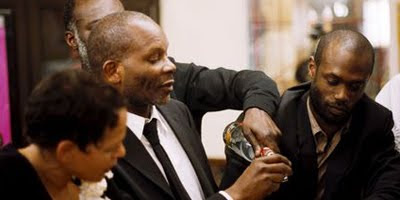 I'm in no doubt that this is one of the best films of last, or any, year. Everything about it works. The way Denis focuses on the tiny, apparently superfluous moments before or after significant events pleasantly sets it apart from many other, perhaps similar and more easily fathomable, family-centred mainstream films. She knows that the everyday instances of hard-won affection are, in the end, more meaningful on a personal level than the defining public occasions. But it's the particular way in which she portrays them - sometimes skewed, sometimes openhanded, but always honestly - that gives a film like 35 Shots of Rum its delightful, lasting potency. As Lionel says, after the wedding at the end of the film when Gabrielle asks him why he insists on drinking the thirty-five shots of rum: "It's an old story." We never discover the true implication behind the title of the film, but we somehow know why he finally allows himself his own personal celebration: it's the right way to let the story end.

That's one way of looking at 35 Shots, but here's another one - courtesy of this nice lady, who is far more concise about it than I was. (I really love what she says and like the way she becomes visibly more thoughtful and affected by it the more she talks about it.)

And here's the Commodores' wonderful song 'Nightshift'. (I had to include it since I went on about it so much.)

Posted by Craig Bloomfield at 17:05