Pickup on South Street is an amazing film experience and one of my all-time favourite films. I love the way the opening titles boldly usher the film in with due haste as if its very playing out was a matter of utmost urgency. Which, really, it is. Quick drum intro, music starts: Twentieth Century Fox presents Richard Widmark, Jean Peters, Thelma Ritter... 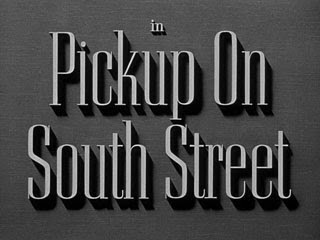 Simple black-shadowed white type, grey background. It reads like a headline: Attention grabbing: in your face! Fuller knew how to make words matter. More than that he knew how to shoot words (titles, script, dialogue - the whole pocketful), turning them into some of the most abrasively significant images of the era.

Who are these three people? What happened on South Street? Watch the film to find out. And in keeping with Andrew Sarris' statement on Fuller, "[he] is an authentic American primitive whose works have to be seen to be understood. Seen, not heard or synopsized,"* it's much better to see why I adore this snappy opening title than for me to waste another word explaining it: