At the Cinema: Somewhere 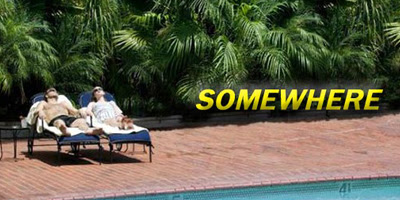 Sofia Coppola’s new film Somewhere starts in first gear but ends on autopilot. She’s bold enough to allow an experimentally languorous preamble at the outset, even letting some intriguing dead air permeate her cinematic confectionery early on (a pre-title scene of a car circling a racetrack from a fixed camera position takes its own sweet time), but due to an increasing familiarity of tone it becomes Sof-Copp-by-numbers by the halfway mark. I’m always keen on what she’ll come out with next, but – as with Christopher Nolan's work – I find myself wondering if I’ll ever truly love one of her films. Can I only snatch brief glimpses of the overall greatness many others see in her work? Or are her movies simply time-passing fancies for me, and little more? Either way, we’ve been here before: a transitionary protagonist wallowing in hotel life has life-changing meeting; things likely get immeasurably altered whilst we bathe in the hazy luxury of hip delight. Sofia Coppola is very much dealing with home-away-from-home comforts. 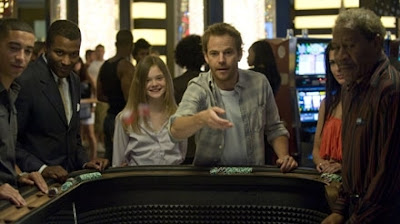 Her film is entirely lovely to look at (as photographed by the great Harris Savides), and it has some well selected and aptly placed pop songs on the soundtrack (keep ears pricked for Phoenix's opening titles score, inventively made up of car engine revs), but it feels too much like happy stasis. Its first twenty-or-so-minutes largely constitute a series of instances woven together in the life of fading, strung-out Hollywood movie star Johnny Marco (played by Stephen Dorff) – he fritters time away in between routine appointments, lounging with pole dancers, navigating tiresome parties with film world flakes, and indulging in some vacant, soul-searching stares from the Chateau Marmont hotel balcony, and so on – but, despite being some of the film's best moments, they do feel slightly inconsequential overall. (Is this Coppola's key point?) This is all well and good, however, until he has to take charge of his estranged daughter (Elle Fanning) and attempt to emotionally re-engage with his real self in the process. 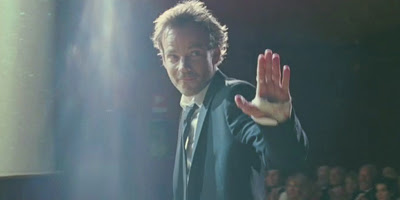 Cool and listlessly somnambulant drifters are common currency for Coppola. She doesn’t entirely take her characters anywhere fresh in her L.A. jaunt, and after a while it’s fairly easy to predict where Somewhere will end up. The film meanders nicely enough – Sofia does love those lazy days away – but it loses some of its early finesse on later scenes which don’t really go anywhere, or say anything, particularly interesting. Coppola is obviously criticising the Hollywood machine here, but she’s also clearly enamoured with it too: she’s well-placed to take aim, but maybe too close to really have something coruscating to say. She’s a direct product of it, too, which makes several of her soft attacks come off as slightly too precious, a bit like artistic therapy for its own sake. She wants to eat the hand that feeds her, but merely ends up nibbling its fingernails. Although it does effectively pinpoint some of the less glamorous actorly tasks with some wit and effective clarity. (A make-up test sitting, where Dorff is caked in old man prosthetics, is both deliberately ponderous and strangely creepy – it incrementally speaks volumes about the cyclical nature of stardom in one acute slow zoom.) 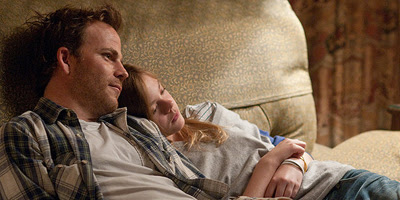 Somewhere has the most relaxed, laid back atmosphere of any film I’ve seen this year, save for perhaps Greenberg, which it feels somewhat akin to at times. And it's an effective, refreshing and pastel-soft escapist diversion for a globe still in economic crisis. But, then again, is an indulgent tale about a privileged, self-examining A-lister quite what the world needs right now? Dorff and Fanning are good enough at playing relaxed and carefree, and Savides’ superb photography (more L.A. kinship with Greenberg) is, without question, some of the year’s best. But despite some choice scenes of upended introspection, and amusing examinations of the tedious side of fame, there is leftover merely a lot of dependably shot elegant slumming. I got the feeling Coppola is coasting here, however blissfully  fuzzy the ride. I went in disarmed and curious, but left with a shrug. Somewhere could equally have been called Here, There or Anywhere.

This review has been altered and expanded from a piece from the LFF I wrote for The Film Experience
Posted by Craig Bloomfield at 22:14